This weekend is the last weekend that we’ll have Google Reader. While I scramble to find an adequate substitute, Om asks why Google wants out of the RSS reader market when everyone else wants in. [GigaOM]

How does Edward Snowden protect against NSA eavesdropping bugs? He uses his refrigerator. [New York Times]

When the Glorious PC Gaming Master Race looks for a CPU and graphics card for their gaming rig, their first choice is usually Intel and NVIDIA. So why did Microsoft and Sony go with AMD rather than Intel or NVIDIA? [Forbes Tech]

Microsoft might have removed used games restrictions to match Sony but that doesn’t mean that the big publishers are on-board with that. [IGN]

Groove to a Ska Cover of the Game of Thrones Theme

Who doesn’t love ska? It’s really an underappreciated musical genre. That’s probably why I absolutely love this cover of the Game of Thrones theme song by the Pannonia Allstars Ska Orchestra. Winter is coming.

It’s not everyday that one single indie game, an indie game that’s the first effort of a former gaming journalist, causes the whole of the gaming press to pause and take notice. But that’s what we have with Gunpoint, the rookie effort of now-former PC Gamer writer Tom Francis. I say that he’s now a former PC Gamer writer because the commercial success of Gunpoint has given Francis the financial freedom to pursue game development full-time.

So could the debut effort of a man who hasn’t made a game before and put it together in off-the-shelf game making software be worthy of all the praise it received? Yes. Yes, it can.

END_OF_DOCUMENT_TOKEN_TO_BE_REPLACED

At the start of 2013, Australia introduced its new “Guidelines for the Classification of Computer Games.” This introduced a the first mature-type rating in Australia for video games called “R 18+.” For the first time since the introduction of that new rating level, the Australian Government Classification Board has refused a rating for a game with Volition and Deep Silver’s upcoming Saints Row IV getting that distinction.

END_OF_DOCUMENT_TOKEN_TO_BE_REPLACED

I didn’t realize that these were a properly official thing but a group of 30 gaming publications come together after E3 to give out official awards for games that are presented and playable at E3. I just thought that each publication did their own awards and they didn’t really mean anything. Okay, in reality, E3 awards don’t mean anything but they sure look great for marketing.

Anyway, if this year’s E3 awards mean anything, Titanfall is going to be an absolute blockbuster that makes Microsoft smart for locking it up as a console exclusive. That was about the only bright spot for Microsoft. When it came to first-party nominations, Sony racked up more than three times as many as Microsoft.

END_OF_DOCUMENT_TOKEN_TO_BE_REPLACED 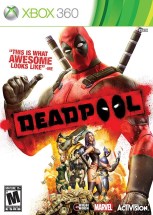 Superhero games tend not to be terribly good. Off the top of my head, the last great licensed superhero/comic book game was Spider-man 2, though that might have been down to the web-swinging. Then again, licensed games, in general, tend to have a reputation for being poor.

Yesterday’s release of Deadpool wasn’t among this year’s worst games but it doesn’t sound like the sort of game that’s likely to get much traction outside of Deadpool fans and the Marvel crowd. The reviews indicate that this game is a good piece of fan service but nothing particularly fresh or innovative.

END_OF_DOCUMENT_TOKEN_TO_BE_REPLACED

PlayStation 4 Plans to Release More Exclusives Than Xbox One

While Microsoft came out guns-a-blazing at their May console launch in promising exclusives for their new console. Along with the console, they announced that the Xbox One would get 15 exclusive games during the console’s first year and eight of those will be from new franchises.

Now, Sony is firing back with their own big line-up of first year PlayStation 4 exclusives. Sony Computer Entertainment Europe CEO Jim Ryan told Gamereactor that the PlayStation 4 can expect 20 exclusives on the console in the first year after release with 12 of them being new IPs.

END_OF_DOCUMENT_TOKEN_TO_BE_REPLACED

Last week, I noted how DC followed up on the spectacularly successful release of Man of Steel (which I still haven’t gotten time to see yet) with absolutely no Superman comics. This week, they correct that with five different comics featuring Superman and that’s not including three trade paperbacks with Superman stories.

For the Superman fan, you can pick up two solo Superman titles with Adventures of Superman #2 and Superman #21 both out this week. Supes also teams up with his fellow Justice League friends in Justice League #21 and Injustice: Gods Among Us #6. And my first pick of the week is a new Superman series with Batman called Batman/Superman #1.

After all that, I still have two more picks that I have to give you. Since I was raised to be a huge kaiju fan, I’m looking forward to Godzilla: Rulers of the Earth #1. And you should give Image’s The Bounce #2 a read too.

END_OF_DOCUMENT_TOKEN_TO_BE_REPLACED

YouTube user vendo233 undertook a big task in making his own trailer for the planned Mass Effect movie. For these types of fan-made trailers, we usually see video and audio from the games edited together to hype the whole Reaper invasion story. Vendo233 took it several steps further. Not only does he use clips and audio from the games but he edits them to give them a big budget shine, splices in clips from other movies and even does some of his own CGI work to put together an epic trailer.

PSA: You Can Apply to be in Project Spark’s Beta

A quick FYI for Xbox fans and people with Windows 8. My personal choice for the best Xbox One game at E3, Project Spark, will soon be starting a closed beta and you can be a part of it. If you sign up for more information on the beta, you could be selected to be a beta tester for the game. If I had a Windows 8 PC, I would be all over that. Yes, I’m really that interested in Project Spark.