If you’re a League of Legends fan, you’ve probably been doing a lot of stream watching this week. It’s LCS Europe super week and this weekend’s eSports calendar also includes the North American LCS super week. And if you’re a StarCraft fan, we have WCS EU Challenger League and the American qualifier for IEM Toronto. It’s not the busiest weekend ever but there’s still something to watch.

END_OF_DOCUMENT_TOKEN_TO_BE_REPLACED

Sony’s new cloud gaming service that I once called gaming’s next constructive technology is going to go public… kind of. The long-awaited open beta of PlayStation Now goes live in open beta to PlayStation 4 gamers in the US and Canada today.

END_OF_DOCUMENT_TOKEN_TO_BE_REPLACED

The Last of Us Live Show Includes Secret Epilogue

Ahead of yesterday’s release of The Last of Us: Remastered on PlayStation 4, the folks at Naughty Dog (and marketing guru masquerading as a journalist Geoff Keighley) put together a special one night only stage performance of The Last of Us.

The live performance of scenes from the game also included a special treat at the end for those in attendance. There was a special epilogue scene that game director Neil Druckmann said was only included for the stage show and won’t be included in any release of The Last of Us going forward.

END_OF_DOCUMENT_TOKEN_TO_BE_REPLACED

Tags: Naughty Dog, Sony Computer Entertainment, The Last of Us

Sometimes it’s not enough to make money off of new game sales, used game sales, hardware sales, game warranties, merchandise and the like. Sometimes, you have to think outside the game box. That’s what GameStop is trying by becoming the latest store to get into the credit card game.

END_OF_DOCUMENT_TOKEN_TO_BE_REPLACED

Back when the Xbox One was first launched, EA came on to the stage and mentioned that they had a special relationship with Microsoft and the Xbox brand. Back in 2013, that meant cancelling their online pass program because they knew that Microsoft was going to load the Xbox One with DRM.

In 2014, that special relationship means that EA is bringing a new product offering exclusively to Xbox One. However, it’s not a new exclusive game. It’s a subscription service that’s exclusive to the Xbox One called EA Access.

END_OF_DOCUMENT_TOKEN_TO_BE_REPLACED 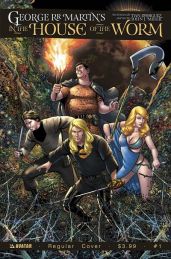 I don’t know how often I accomplish it but I like to start these Comic Book Pull List posts with a look at some of the new and odd offerings that comic book publishers have each week. For example, we know that Dynamite is adapting A Game of Thrones into a comic series. Now, Avatar has another George R.R. Martin book coming to coloured ink with In The House Of The Worm #1.

Over at Vertigo / DC Comics, they have a horror slash murder mystery miniseries that covers four murders in four time periods from the 1890s to 2050s. If that’s not your speed, you can always read about a “homicidal cybernetic kung fu rooster” in Chew: Warrior Chicken Poyo #1.

END_OF_DOCUMENT_TOKEN_TO_BE_REPLACED

Crytek Once Again Insists That Its Finances Are Secure

Over the last few weeks, we’ve had a few reports about developer Crytek going through serious financial trouble that has resulted in the company missing paycheques and senior staff leaving the company.

After far too much silence on the matter, Crytek has finally come out with an official statement that indicates that their current financial situation has been stabilized.

END_OF_DOCUMENT_TOKEN_TO_BE_REPLACED

Get Your First Look at Gal Gadot as Wonder Woman

As you’d expect, Warner Bros. and DC gave us a little treat from the upcoming Batman v Superman: Dawn of Justice at their Comic Con panel. In addition to showing a short clip and parading the principal heroes out on stage, we also got our first look at Gal Gadot in her Wonder Woman armour.

Good news! All your worst fears about Gal Gadot as Wonder Woman have been confirmed!

END_OF_DOCUMENT_TOKEN_TO_BE_REPLACED

It’s not E3 but the annual San Diego Comic Con gives game developers and publishers a big platform to make announcements and show off the latest looks at their upcoming games to a big audience. With Comic Con having become a part of mainstream culture rather than just “geek culture,” this past weekend might be the second most important promotional week of the year behind E3. You could make an argument for Gamescom but that’s very gamer-centric so it doesn’t get the news out as far.

This week, we have a whole pile of trailers that come to us from Comic Con. Microsoft has a pretty looking trailer for the Halo 2 rerelease. Licensed games get some love with Lego Batman 3, Firefly Online and a new Sherlock Holmes game getting new trailers. Speaking of new, BioWare teases their new IP in a live-action teaser.

END_OF_DOCUMENT_TOKEN_TO_BE_REPLACED

Apparently this video is three years old but it’s new to me so it goes up on the blog. I can’t say that I’m a fan of Katy Perry’s music but I am a fan of classic Star Trek so I find it absolutely hilarious that ST:TOS makes for an absolutely perfect music video for Last Friday Night. Maybe I like it because it’s a three-minute tribute to all of Bill Shatner’s hammy acting.