I could be wrong but this is the last chance that we’ll get to do the Game Trailers Roundup on a February 29th for the next 28 years. I somehow doubt that I’ll be around doing this in 2044 but stranger things have happened.

The big feature in this week’s roundup is Uncharted 4 which made waves for including art from Assassin’s Creed IV in the original story trailer so we have the updated one for you to watch. Nintendo has trailers for the new Pokemon games as well as Bravely Second. Oh, and there’s also Superhot. Super. Hot. Super. You get it by now.

END_OF_DOCUMENT_TOKEN_TO_BE_REPLACED

Everything That’s Wrong with YouTube According to GradeAUnderA (Part 2)

Two weeks ago, YouTuber GradeAUnderA took a look at everything that is wrong with YouTube starting with the site’s lax attitude towards actually enforcing copyright laws, fair use and its own community guidelines. This week, GradeAUnderA looks at the other six YouTube community guidelines that YouTube purports to enforce but doesn’t seem to unless it’s against a channel trying to produce quality content.

Apologies for the lack of content lately. I’ve been busy travelling with work last week and I was felled with a bad cold/flu and nasty kitchen knife cut this weekend. So I’m not exactly typing one-handed right now but I’m only using my index finger on my left hand to type right now and it’s incredibly annoying.

Anyway, it’s Monday which means that we have to catch you up on the latest video game trailers from the last week. We have a couple of triple-A launch trailers for you for Street Fighter V and PvZ: Garden Warfare 2. There are a pair of Pokemon trailers for both classic Pokemon and Pokken Tournament. And we have six more trailers for you to watch after that.

END_OF_DOCUMENT_TOKEN_TO_BE_REPLACED

While yesterday’s game trailers were a little lacking in quantity, there’s no such complaint for the movie trailers. Today’s movie trailers roundup has eleven trailers for you to watch. It’s a mix of action, comedy and thrillers this week.

END_OF_DOCUMENT_TOKEN_TO_BE_REPLACED

One of the alleged selling points of The Order: 1886 was that it was “cinematic” but it didn’t really feel like anything out of a movie other than the aspect ratio of the screen. To make a game that seems like a movie, you need to rely on more than just the visuals. Ready at Dawn missed that memo.

Supermassive Games didn’t miss that memo. They had last year’s PS4 exclusive that was noteworthy for all reason opposite to The Order: 1886. While Until Dawn could be called a cinematic game, it was cinematic because it was put together as a loving homage to 90s slasher and horror movies. It looked and acted the part and was all the better for it.

END_OF_DOCUMENT_TOKEN_TO_BE_REPLACED

This week’s game trailers roundup is a little shorter than the last few weeks with only five trailers for you. On the plus side, they’re all for triple-A games. We’re reaching that time of year where the big publishers are trying to get games out the door for their year-end financial results. That six month window from October through March sure is a great time to be a gamer.

END_OF_DOCUMENT_TOKEN_TO_BE_REPLACED

Is Microsoft Making a Mistake Pushing the Microsoft Store on PC Gamers?

I bring this up in the wake of the recent announcement that Microsoft is launching Quantum Break on PC alongside Xbox One. While Quantum Break will be the first game in Microsoft’s own renewed push towards making Windows a prominent gaming platform, the vast majority of PC gamers won’t be able to play it. That’s because Quantum Break won’t be coming to Steam but will be a Microsoft Store exclusive.

END_OF_DOCUMENT_TOKEN_TO_BE_REPLACED

One thing that is wildly inconsistent in PC gaming is the quality of tooltips on the graphics options menu. You have games like StarCraft II which tell you which piece of hardware is being drawn on the most by a particular option and you have other games that just leave you to guess what the options mean, assuming they have any. Fortunately, in the case of the latter, I found this handy little infographic that explains some of the more prominent graphics options in PC gaming.

END_OF_DOCUMENT_TOKEN_TO_BE_REPLACED

The folks over at Dead Pixel Digital have created what looks to be the next great gaming viral video. Mario Kart is one of the best racing games out there (Crash Team Racing notwithstanding). Even Star Wars had a couple of racing games with the fantastic Star Wars: Racer and the kart racer Super Bombad Racing. But what happens when the two are combined into Star Wars-themed Mario Kart?

League of Legends is Shutting Down Dominion 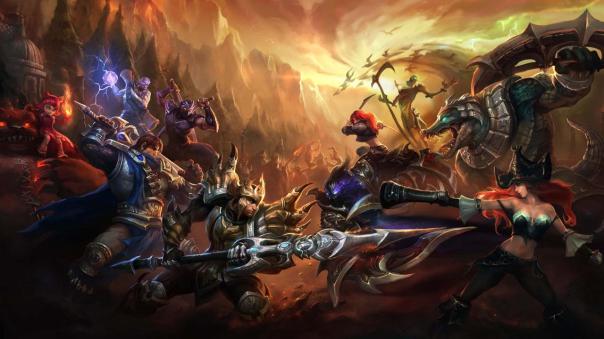 Sadly, your time on the Crystal Scar is coming to an end. Riot has announced that on February 22nd, they will be disabling the Dominion game mode and removing Crystal Scar from the custom games menu.