The lead actors of Game of Thrones are getting paid. HBO is trading their commitment to Season Seven for big raises.  [The Hollywood Reporter]

In an editorial for Businessweek, Tim Cook came out as gay. [Businessweek]

Netflix is probably going to end up the second-biggest victim of the death of net neutrality (the end users being the biggest victim). Here’s how Netflix is currently being throttled by ISPs. [Medium]

Good news! YouTube has launched 60 FPS playback for videos in HD. It only works on Chrome right now but you probably have it on your computer anyway. [PC World]

Jim Cameron is a fan of pushing technology used in movies and creating visual epics (almost as much as George Lucas) but he’s not sold on virtual reality yet. He says that if you want virtual reality, play a video game. Of course he’d say something smart like that. He’s from up the road in Kap. Must be that Northern Ontario water. [GameSpot]

You knew that changes were coming to Twitch after their billion-dollar purchase by Amazon. However, changes so far have been fairly minimal. Sure, there’s the content ID on VODs but it beats the haphazard way that YouTube’s content ID and DCMA systems work. And their latest change might seem fairly minimal but it might have a big impact on some streamers with this week’s changes to the rules of conduct.

The two changes to Twitch’s Rules of Conduct revolve around what Twitch called “self destructive behaviour” and “sexually suggestive” clothing and behaviour.

END_OF_DOCUMENT_TOKEN_TO_BE_REPLACED

Marvel Unveils Next Slate of Movies, Including New Avengers, Captain America and Guardrians

We know what the plan is for Marvel Studios, the TV and movie production arm of Marvel Comics, through the end of next year. However, until Tuesday, we didn’t know what the plan was beyond that point. At a special event at El Capitan Theater in Los Angeles, Marvel announced plans for Phase Three of their movie initiative.

END_OF_DOCUMENT_TOKEN_TO_BE_REPLACED

The vintage game updater and store, GOG.com, has added another new publisher to its catalogue and the internet has come mental over it. As of yesterday, GOG added classic LucasArts (AKA LucasFilm Interactive) debuted on the store with six games and the promise of over 20 games to be released on GOG in total.

END_OF_DOCUMENT_TOKEN_TO_BE_REPLACED

Another week, another LOL Ubisoft moment. If WordPress let me run ads on this blog, I think that I could have put myself through university with all the foot-in-mouth moments coming out of Ubisoft over the last few months.

The latest LOL Ubisoft (LOLbisoft?) moment is from Far Cry 4 creative director Alex Hutchinson. He told the Official Xbox Magazine that resolution is “certainly not something I care about in a game.”

END_OF_DOCUMENT_TOKEN_TO_BE_REPLACED 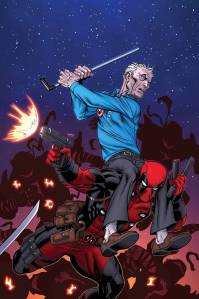 I seem to recall hearing about a Dredd movie sequel coming in comic form at some point from 2000 AD. I thought that they already did that but if you’re still wanting more Dredd (and who doesn’t want more Dredd), there’s Rebellion / 2000 AD’s Dredd: Uprise. Not only does Dredd find himself fighting crime but he’s also caught up in a bit of an economic culture war. That’s timely with elections just wrapping up in Ontario and upcoming in America.

Marvel continues with the death of Wolverine by bringing in a couple of his pals trying to keep people from studying Logan’s DNA in The Death of Wolverine: Deadpool and Captain America #1. And it’s annuals season over at DC Comics. They’ve got four annuals coming out this week with Harley Quinn, Swamp Thing, Justice League Dark and Justice League United all represented this week.

END_OF_DOCUMENT_TOKEN_TO_BE_REPLACED

Since the start of the current generation of video game consoles, Microsoft has been on the back foot. Whether it’s the DRM controversy at the console’s unveiling or the inclusion of Kinect or the $100 higher price tag at launch, Microsoft has been struggling in its battle with Sony for the living room.

For the upcoming holiday season, Microsoft is going to fight back with discounted bundles that will see a $50 discount applied from November 2nd to January 3rd.

END_OF_DOCUMENT_TOKEN_TO_BE_REPLACED

As we cross the halfway point of the first half of the fifth season, I think it’s safe to come to the conclusion that the writers took the 26-episode season order a bit too literally. The season increasingly feels like everyone is taking scripts that weren’t trimmed down to 42 minutes and padded them out to fit two hours of TV time.

This week was our first episode with Audrey back but it might have been to the episode’s detriment with the focus on Naudrey. Is it just me or is that the anchor that might drag this show down before hot shotting the timeslots?

END_OF_DOCUMENT_TOKEN_TO_BE_REPLACED

This week’s edition of the Game Trailers Roundup isn’t as big as last week’s but you’ll probably find something you’re interested in. That is if your interests are RPGs.

There are trailers for Dragon Age: Inquisition, The Witcher 3 and Far Cry 4 this week. If racing games are your speed, there’s a night and rain racing trailer for Project CARS and an announce trailer for Codemasters’ Toybox Turbos. And failing that, if you’re interested in multiplayer games, there’s a trailer for the new Smash Bros. and League of Legends Halloween event.

END_OF_DOCUMENT_TOKEN_TO_BE_REPLACED

DreamHack, one of the biggest multidiscipline eSports event holders in the world, announced over the weekend that they were firing CEO Robert Ohlen just one month before the final DreamHack event of the year, DreamHack Winter.