Even Han Solo’s best friend can’t get through airport security without some serious scrutiny. Peter Mayhew, who is best known for being the man inside the Chewbacca, was given some extra attention from the Transportation Security Administration over his lightsaber cane.

Apparently, they were quite concerned about the safety of the plane with Mayhew and his not-a-real lightsaber aboard. Initial media reports said that fans pressured the TSA to let Mayhew and his cane through security after a lengthy check but the TSA denies that was the case.

Superman vs. Batman: Why Batman Wins 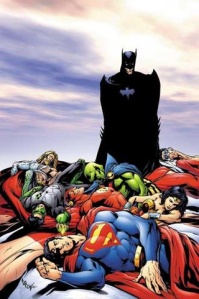 In anticipation of the release of Injustice: Gods Among Us, Steve and Jackie are tackling the ultimate question as we look forward to the game’s release. Today, we would look at who would win the fight between Superman and Batman. While Steve chose to back the dude in the red cape and tight blue spandex, Jackie looks at why Batman would win.

So why would Batman win you ask? Well he’s the freakin’ Dark Knight! He’s badass! He’s the Batman! That’s right. Crushed it.

Sure, Batman doesn’t have the superhuman abilities like Superman. He can’t fly. He ain’t got no super hearing. He certainly doesn’t have x-ray vision. He can’t shoot solar energy from his eyes, but at least he ain’t afraid of Kryptonite! END_OF_DOCUMENT_TOKEN_TO_BE_REPLACED