← CES 2013: Wednesday Roundup
I Knew I Saw the New Starter Pokemon Before →

Zombies. After the last year in gaming, I could understand if you’re a bit burned out on zombies. That doesn’t mean that the creativity in the zombie game genre is all used up. I have one more zombie game for you to consider. Dead Pixels is an 8-bit style throwback game which crosses the shoot ’em up style zombie game, like the Left 4 Dead games, with some more modern RPG-style mechanics. The result is a game that intentionally looks dated but plays fresh. The question is if this is one more zombie game you should add to your now vast zombie game collection.

There are three different game modes for you to play through. The Dead Pixels story has you running through the zombie-filled streets of New Hexington to an escape helicopter. The Solution is a sequel story to Dead Pixels features you as a convict sent into New Hexington to blow up the town to contain the zombie apocalypse. The Last Stand is a straight survival mode which features you holding out as long as you can until you become zombie food. 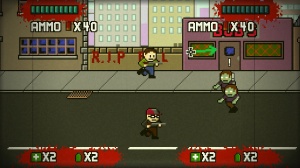 Each game mode comes with a local co-op mode in addition to single player. That works on the Xbox but since I don’t own a controller for my PC (a mouse and keyboard work fine for 99% of games, thank you), I can’t do any co-op. Online multi-player with my friends would be something that I would use. Besides, when was the last time you local co-oped anything? I know this is a $3 indie game and it’s probably prohibitively expensive to set up an online game mode but I wouldn’t mind paying a little more for online co-op.

Dead Pixels does a great job of crossing retro-style combat with RPG elements that give the game some depth and personalization. Just when you think it’s a retro Left 4 Dead game, those RPG elements show up.

You go around shooting zombies with the near hundred weapons in the game, lobbing grenades to blow them up or poking them to death with your melee attack. Being an 8-bit style game, you shoot in a straight line ahead of you. That cursor on your screen just determines which side you shoot to. It definitely helps to run away from the swarm of zombies while trying to shotgun them full of lead. It’s a simple but effective combat system that feels true to what you would expect from a classic Nintendo game. 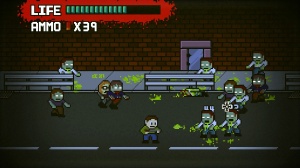 Shooting (or grenading or meleeing) zombies registers damage on the zombies which pops up above their heads. That’s because all characters have RPG-style health meters that you wear down. There are also several different types of zombies with varying health levels, running speed, attack styles (some are biters while others have projectile attacks) and levels of awareness (some zombies see you from a mile away while others won’t bother you until you either stand next to them or shoot them). The number and types of enemies that you run into are randomly generated so each playthrough will be unique but things will get harder as you go along… Just what I need when running low on ammo and health packs.

The RPG elements don’t stop there, though. In Dead Pixels and The Solutions, you can scavenge empty houses for loot (weapons, ammo, health packs, etc.). Carry too much and exceed your maximum carrying weight limit and you’ll start running as fast as a sloth. Try running from zombies like that.

In all three modes, dead zombies drop money which you can use to buy weapons, ammo and supplies. In Dead Pixels and Last Stand, you can even upgrade your character by purchasing increases to your health, weapon damage, running speed, inventory capacity and more.

For such an inexpensive game, there’s a tonne of depth to the gameplay. I came into this game expecting to carry a shotgun with some power-ups dropping along the way. Instead, somebody got RPG in my shooter and I’m alright with that.

This game looks like a classic 8-bit. That’s just part of the retro charm. It does come with a film grain effect to make the game look a little older. The audio, however, isn’t 8-bit. It has a rock-inspired soundtrack that fits well with the run-and-gun action of the game. There are some chiptunes used during the story introductions but that’s about the sum of 8-bit music use. The game’s sound effects are also modern. There’s nothing 8-bit about grunting zombies or pumping the undead full of lead. While it may look retro, it doesn’t sound like it.

This biggest thing going for this game is that it’s only $2.99. For just three dollars, you get well put together zombie game that doesn’t play like the rest the many zombie games already on the market. If you’re a fan of zombie games or retro games, you’ll want to pick this one up. If you’re just looking for a game with great value that you can sink a few hours into and easily get your money’s worth, you’d do far better with Dead Pixels than many $60 triple-A releases.

Dead Pixels was reviewed on the PC but is also available for the Xbox 360. Your impressions of the game may change based on the console played on.

← CES 2013: Wednesday Roundup
I Knew I Saw the New Starter Pokemon Before →