LeVar Burton is trying to bring Reading Rainbow back to the masses and right into the schools. Just like the good old days, he’s doing so with the aid of donations from generous people like you. But instead of going through PBS, he’s going through Kickstarter to relaunch the iconic and award-winning literacy and educational series. [Jezebel]

There are plenty of ways that you can make money thanks to video games. One way is through selling items through Steam. However, even that is a risky endeavor. [Polygon]

I shouldn’t have to be reporting on game journalists’ ethics but Siliconera has been accused of stealing someone’s translated news articles and using them verbatim without properly citing the work he’s done. I’d say that they should be better than that but clearly they’re not. [Dime a Dozen]

The Science of Game of Thrones

Sometimes real science and unreal fiction don’t always work together but that doesn’t mean that we can’t enjoy the internal science of fiction. Take, for example, Game of Thrones. Well, it is Friday of Ice and Fire so you had to know that this was likely to be a GoT post.

PBS’ It’s Okay To Be Smart takes a look at some of the various bits of science unique to the Song of Ice and Fire franchise to see if it could work in our reality. Today’s video looks at the science of GoT’s seasons, the geography and geology of Westeros and Essos, forging Valyrian steel and more.

I’m not a fan hyperbolic hashtags but since it was announced, Watch Dogs has had enough #hype that it easily trumps the amount of hype that Titanfall had behind it. This game had a solid two years of hype from the initial announcement to buzz over next-gen level graphics, the release date announcement and subsequent delays. For these last two years, Watch Dogs has been held up as the gold standard for next-gen gaming. It was hyped as the first must-own game of this generation of consoles. Well, it might have been if it hadn’t been pushed back six months.

Watch Dogs is the second of this month’s releases that I saw in action at Fan Expo. Trust me when I say that Watch Dogs needed the time to fix it. There were clipping issues with bridges. The framerate was a bit wobbly. And the controls looked a little sluggish. Of course, that was just one tiny vertical slice that I saw nine months ago.

Did the extra six months of polish time make Watch Dogs worth the #hype? Let’s see what the critics think.

END_OF_DOCUMENT_TOKEN_TO_BE_REPLACED

It looks like the good people of the Dogecoin community have started a trend and it looks like Phil Parsons Racing and the Doge Driver himself, Josh Wise, will be the beneficiaries. After /r/Dogecoin raised $60,000 to sponsor Wise’s car at Talladega and voted him into the NASCAR All-Star Race, now online racing sim iRacing is getting fans to help out Wise and Phil Parsons Racing.

END_OF_DOCUMENT_TOKEN_TO_BE_REPLACED

Just when PC gamers were getting the next-gen controller experience that console gamers aren’t getting with their next-gen consoles, Valve told everyone to hold their horses. Valve updated the Steam Universe group with announcement that the Steam Controller won’t be publicly available until 2015.

END_OF_DOCUMENT_TOKEN_TO_BE_REPLACED

Nintendo to Start YouTube Affiliate Program to Take Some, Not All, of Fan Channels’ Money

Nintendo has had a hell of a time figuring out how this whole YouTube thing works. Last year, they started cracking down on Let’s Play videos on YouTube by using the video website’s ContentID system to claim revenue from those videos. They also claimed that they were dropping story mode from the upcoming Super Smash Bros. on Wii U because the cutscenes would end up on the internet so it defeated the purpose.

Now, Nintendo, in their great benevolence, have decided to meet Nintendo fans halfway. Rather than take all the ad revenue from the people who help promote their games on YouTube, Nintendo has announced a new YouTube affiliate program that will see both parties splitting the ad revenue.

END_OF_DOCUMENT_TOKEN_TO_BE_REPLACED 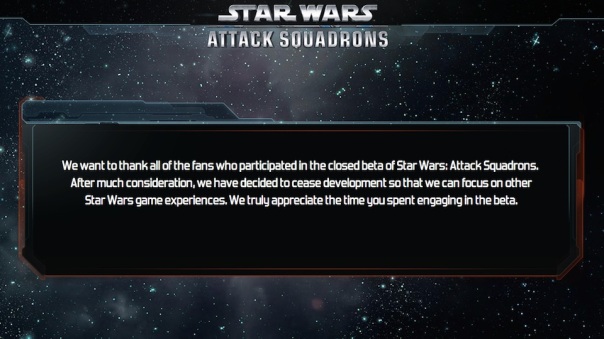 Just when you thought that the purchase of LucasFilm and LucasArts by Disney would lead to the return of space sims to the Star Wars game library, Disney pulled the rug out from under you. Star Wars: Attack Squadron was cancelled while in the midst of its closed beta.

END_OF_DOCUMENT_TOKEN_TO_BE_REPLACED

Well, I don’t know about you but I’m excited for tomorrow. No, it’s not because it’s my birthday. It’s really not. I’m still in my mid-20s and my hair is starting to go grey. Just little bits on the sides for now but if I keep working myself so hard IRL, it’ll be completely grey. Beats going bald by 30 like my old man, though.

For me this week, it’s only appropriate that The Star Wars, the comic series based on George Lucas’ original draft of the iconic film and franchise, comes to an end this week. I’ve been loving this alternate take on the series since it started though that doesn’t mean that I’m not happy with how the original trilogy turned out in the end. Now, if we could all forget about those damned prequels… Except for III. That one was good.

END_OF_DOCUMENT_TOKEN_TO_BE_REPLACED

Sony Launching Pre-Loading of All Pre-Orders in September

One area that the old brick-and-mortar games retailer still has over your favourite digital retailer is firing up the game on launch day. Sometimes, picking up a game at a midnight launch gets you gaming faster than having to download the game from the various stores you buy from.

Sony is planning to change that on their PlayStation Store this fall. Starting with the launch of Destiny in September, Sony says that all games pre-ordered on the Store will be available for pre-loading prior to the game’s launch so you can play right when the game’s release.

END_OF_DOCUMENT_TOKEN_TO_BE_REPLACED

Even though last week’s game trailer roundup was later than usual, the last five days have been pretty good for the quantity of trailers. If there’s a game you’re looking forward to, there might have been a trailer released in the last week.

In this week’s edition of the roundup, we have two launch trailers for Drakengard 4 and The Wolf Among Us: Episode 4. There are trailers for the upcoming Murdered: Soul Suspect and Metro Redux. And the fall releases are represented by trailers for Batman: Arkham Knight and Middle-Earth: Shadow of Mordor.