Which is More Popular: Star Trek or Star Wars?

It’s the age-old debate among geeks, nerds and other sci-fi enthusiasts. Sometimes it’s phrased as “which is better?” Sometimes it’s a debate over whether a Starfleet armada could topple the Imperial Fleet. I’ve even heard Captain Kirk vs. Han Solo. Either way, the timeless confrontation is Star Trek or Star Wars.

Our friends over at Movoto took to social media to find out whether Americans were Trekkies or Star Wars fans. Do Star Wars fans have a cute name like “trekkies?”

“We turned to everyone’s favorite social media site, Facebook, and checked what percent of a state’s population “Liked” each of the major franchises.

Unfortunately for Trekkies, it became pretty obvious pretty fast that “Star Wars” reigned supreme, winning out in every single state, most of the time by a ratio of 3 to 1.”

So in order to make up for the incredibly quick and decisive victory for Star Wars (and that’s surprising considering that Star Trek has had four or five great movies [Khan, Voyage Home, Undiscovered Country, First Contact and maybe ST11] since the last properly great Star Wars movie [Empire]), Movoto looked into which state had the highest proportion of Star Trek and Star Wars fans.

Then, we added up the total Likes and found out which state had the highest percent of people that Liked either one franchise or the other, giving us a list of which states were the most star-struck, so to speak.” 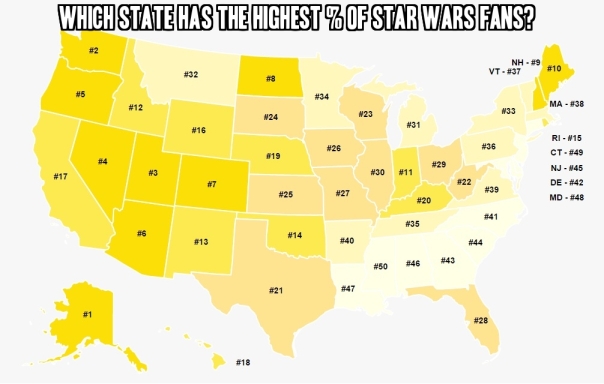 So what do we learn from this? Well, there are a lot of sci-fi fans in the west of America. Conversely, the bible belt hates science fiction. Considering organized religion’s beliefs that the Harry Potter books and movies promoted witchcraft and was the work of the devil, their lack of love for Star Trek and Star Wars doesn’t surprise me too much.