As if Aliens: Colonial Marines hadn’t been controversial enough with terrible reviews, the unfavourable differences between the demo and actual game and the finger-pointing over who was to blame for the failure of the game, it’s just gotten worse. A class action lawsuit has been filed in California claiming that Gearbox and Sega knowingly misrepresented the state of Aliens: Colonial Marines.

The lawsuit alleges that the demo Gearbox and Sega presented at trade shows like PAX and E3 greatly differed from the final product. This has been covered at length by the gaming press with all coming to the conclusion that this demo wasn’t a “vertical slice” of the game as Gearbox claimed but a demo that was specifically developed separately from the actual game. 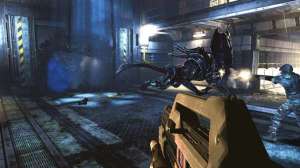 Also included is a claim that the review embargo on the game prevented pre-purchasers and early buyers from knowing that the review copy of the game was significantly different from the demo. As such, the lawsuit is seeking to claim reparations for people who pre-ordered the game or bought it on day one as they would not have had access to reviews that may have changed their decision to buy the game.

“The gaming community had a strong reaction to the release of Aliens: Colonial Marines. We think the video game industry is no different than any other that deals with consumers: if companies like Sega and Gearbox promise their customers one thing but deliver something else, then they should be held accountable for that decision.”

I’m not a lawyer but my basic law knowledge from Law & Order and a university law class suggests that Sega and Gearbox aren’t in a good position here. Normally, you can quickly figure out what’s a frivolous lawsuit. I don’t think Sega and Gearbox are getting out of this without a fight.

More interesting is what a judgment in favour of the plaintiff might change in the gaming industry. Could this change embargo timelines or what is allowed to be disclosed ahead of an embargo date? Could this result in a change to pre-order rules allowing them to be cancelled at any time prior to picking the game up, even after the game is released? What elements of a work-in-progress game that are shown at a trade show be included in the final product?

It’s that last question that will be the complicated part of this case. In most cases, games get more polished as development work is performed. If anything, the WIP gameplay of Aliens: CM is worse than the final product. The tricky part for the course here is finding the balance between allowing a dev to make changes to a game during development and not allowing them to lie about what’s in a game by pretending nothing’s changed.

Posted on May 2, 2013, in Games and tagged Aliens: Colonial Marines, Gearbox, Sega. Bookmark the permalink. Leave a comment.