Steve Haske puts his thoughts about the current path of the games industry into words far better than I ever could. For the record, I agree with a lot of what he says here. [Medium]

You may not know the name Nate Wells but you know his work. He started as an artist on Thief and System Shock 2 before moving up to Art Director for BioShock and BioShock Infinite. Yeah, he’s kind of a big deal. [I.Eat.Games]

Despite getting good reviews, including from this outlet, Retro/Grade was a commercial failure. Now, creator Matt Gilgenbach is working on a new game drawing on the mental health issues that resulted from the financial failure of his game. [Polygon]

Some developers are impressed by their sales on the Ouya. Given some of the Kickstarter model impressions, any sales would be impressive. [GamesIndustry International]

Nintendo’s apparent war against YouTube has carried into what it’s going to put into one of its upcoming games. Super Smash Bros. creator Masahiro Sakurai has written in his column in Weekly Famitsu magazine that the next Super Smash Bros. game won’t include cutscenes.

END_OF_DOCUMENT_TOKEN_TO_BE_REPLACED

A quick FYI for people on Steam who might not always check the Greenlight section of the site. Valve announced a group of sixteen game and software titles that will soon be available on the digital distribution service thanks to the crowd voting on Greenlight.

END_OF_DOCUMENT_TOKEN_TO_BE_REPLACED

Even Commander Shepard can’t resist looking herself up on the extranet. Not only is she not offended by some of the more interesting pieces of fan art out there, she finds it downright hilarious. The rest of her squad, however, isn’t as amused.

END_OF_DOCUMENT_TOKEN_TO_BE_REPLACED

Sony is Working on a Gran Turismo Movie

Just when you thought that Hollywood had run out of ideas, they go out of their way to prove it yet again. On the heels of the rejuvenation of the Fast and the Furious franchise and the announcement of Need for Speed and Hot Wheels movies, Sony is getting into the game with their own car racing franchise.

Rumours say that Sony is working on a movie based on its Gran Turismo game franchise with the producers of Fifty Shades of Grey at the helm.

END_OF_DOCUMENT_TOKEN_TO_BE_REPLACED

The War Z Reaches One Million Players; My Faith In Humanity Dies

The War Z, which I refuse to refer to as Infestation: Survivor Stories until such time as the game is fixed to the point of being playable and not just a blatant cash grab, hasn’t been hurt by its terrible reputation. The game’s publisher has announced that the game has over 1.3 million registered users.

END_OF_DOCUMENT_TOKEN_TO_BE_REPLACED

Whether by design or whether it was unintentional, there will be some competition for your eSports attention during the second weekend of August. Blizzard’s StarCraft II World Championship Series Season 2 regional finals will be held on the same weekend of the Dota 2 world championship The International.

END_OF_DOCUMENT_TOKEN_TO_BE_REPLACED

It’s been a couple of years since we first saw Dota 2 in the wild but we recently got the official full release of Dota 2 on Steam. Dota 2 is the sequel to the Warcraft III mod Defence of the Ancients (DotA) which is considered the first game in the MOBA genre.

I’ve not gotten into Dota 2 yet but now might be as good a time as any if you’re curious about Dota 2, MOBAs or one of the more popular e-sports in the industry right now. Seeing as Dota 2 is a free-to-play game that doesn’t try to gouge you at every opportunity, that puts it above the competition right from when you start it up.

END_OF_DOCUMENT_TOKEN_TO_BE_REPLACED 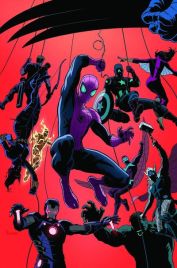 For those of you keeping track of your month-long events, the third part of the Trinity War goes down this week before taking a week off. It’s Justice League Dark #22. It’s not my in file so I’m going to have to make a visit to the store this week.

As for my picks, I’ve got three #1s this week. Superior Spider Month continues with Superior Spider-Man Team Up #1 which sees Spidey team up with some of his Avengers friends. If you’re looking for something a bit off the beaten path, Dynamite has a horror crossover with Army Of Darkness vs. Hack/Slash #1. And seeing as we cover a lot of Mass Effect on the blog, I think that I’m obligated to mention Mass Effect: Foundation #1 which features a new character in the Mass Effect universe and may or may not somehow tie in to the Citadel DLC.

END_OF_DOCUMENT_TOKEN_TO_BE_REPLACED

It looks like Activision Blizzard’s plan to whether any unexpected costs for the upcoming console launches and possible sales shortfalls as a result of economic uncertainty by leveraging a mountain of money may require a rethink.

A report in the Wall Street Journal suggests that Activision’s parent company Vivendi is planning to take a $2 billion cash dividend from the publisher to pay down its own debt.