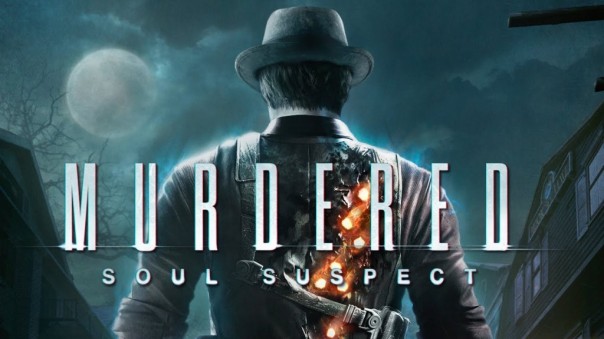 When there’s a game that I’m interested in reviewing, I reach out to the public relations officers at the publisher of the game (or their contracted PR firm) to see if I can get a copy for review. More often than not, I don’t get a copy of the game. Usually, I can wait for a sale and pick up a copy to play it through but usually that’s not for several months that it gets down to a price within my budget.

In the case of Murdered: Soul Suspect, I was figuring that Steam’s Holiday or a spring sale would bring it down to a price where I would buy it. Then I got it for $15 from the Humble Store in early August. Two months after the game was released, I’m already getting it for some 70% off. While I know it was a big enough flop to force developer Airtight Games out of business, it couldn’t be that bad, could it?

As the box art and opening cinematic indicates, you play a ghost. The game’s opening sequence sees you flying out a fourth-story window to your death and having your life flash before your eyes. It’s a very Mass Effect 2 way to open your game but it’s also the game’s unique hook. Rather than ascending to the pearly gates (or heading the other way ’round), you get stuck on earth as a ghost. In order to leave the non-corporeal realm of this corporeal realm, you have to settle any outstanding business that’s tying you to Earth. 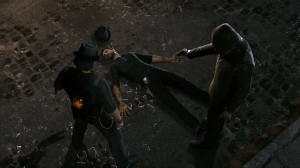 It takes your character a bit to realize that his unfinished business is figuring out who killed him. He was murdered by The Bell Killer, a serial killer who has been terrorizing the small town of Salem, Massachusetts, and he was on the local police force attempting to solve the case when the killer got him. Maybe it was because I had a general idea of the premise of the game heading into it but I thought it was pretty obvious that your job was to solve your own murder and the string of murders that preceded it.

You play as Ronan O’Connor, a very recently deceased police detective with a chequered past. Most police departments in the world wouldn’t let someone with a lengthy criminal record on the force, let alone ascend them to detective, but that’s what happens when your brother-in-law is a rather powerful member of the local constabulary. However, I suppose that if you can live with playing a ghost, you should be able to deal with an ex-con as a cop. There are bigger suspension of disbelief fish to fry.

Anyway, Ronan has two tools at his disposal to help him solve his own murder. The first is the fact that ghosts get supercharged versions of their strengths while alive. In this case, Ronan get supercharged detective powers. He can psychically see traces of memories of events in the room and observe evidence to see what actually happened rather than just deduce what happened.

Supercharged detective powers is both a good and bad thing. On the one hand, you do very little detective work as everything is very clearly explained for you to the point where you feel as though you’re watching a detective show rather than playing a detective game. On the other hand, in the context of the story, it makes sense. If Ronan’s strengths while alive (deductive reasoning, clue identification, other detective skills) are amplified, why would we be doing all the thinking from the other side of the screen? I’d rather work for the solution but this isn’t a detective / puzzle game as much as it is a 3D point-and-click adventure game. Maybe once you reconcile that in your head, Murdered isn’t as bad.

In addition to seeing memory fragments at crime scenes and reading the history of evidence, Ronan can also possess people. He can read their minds which seldom adds anything. Most mind reads are poorly acted, repetitive and does nothing to aid your investigations. You can influence people to think about the crime by using an already discovered piece of evidence to trigger a memory. That’s about the extent of interactivity in your investigations.

There are two types of investigations. The first is a straight investigation that you can conclude when you’ve found all the evidence. The other are ones where you have to answer a question. To end the investigation, you have to pick the pieces of evidence that answer the question. Sometimes the evidence choices make sense as they’re the most blindingly obvious but occasionally you just scratch your head and say “whatever.” In those types of investigations, you could more quickly answer the question in a text box because Ronan’s supernatural investigative powers quickly and boringly answer any possible question that the game has for you. Picking the most relevant evidence is just busy work.

The other tool at his disposal is Joy, a teenage girl who can see, hear and communicate with ghosts. She doesn’t add a whole heck of a lot to the game but she does add a certain level of corporeal help that Ronan could do with to open doors and move pieces of the physical world. She’s also not particularly annoying when it comes to sassy teenage characters. A dime a dozen character trope, maybe, but utterly generic? She didn’t feel that way to me. 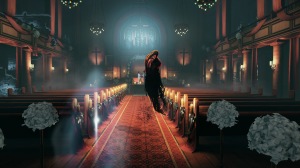 While I can let Airtight get away with making a detective game without any real detective work required on your part (apart from finding piece of evidence to investigate and answering insultingly easy investigation questions), I can’t let them get away with including combat in this game. Seemingly to pad out the game, you’ll have to play a little hide and seek with dark ghosts called demons. You hide in extra-non-corporeal hiding spots so they don’t see you. You also use those spots in a hide-and-seek mini-game if they spot you. To defeat them, you have to sneak up behind them to initiate a quick-time event to kill them.

Also helping to pad out the game are various collectibles hidden throughout the environment. These collectibles don’t add anything to the central plot of the game but they do fill in the backstory of the town, some of the central characters (Ronan, his late wife, Ronan’s brother-in-law) and some ghost stories about points of interest in Salem. Doing a completionist run is supposed to add up to four hours to your playtime. For me, I was done in a little under seven hours with a whole bunch of collectibles so I don’t know how you get up to ten hours like HowLongToBeat.com says it will take. It’s not a particularly long or hard game. That being said, I’m a fan of ghost stories so I liked this little addition to the game and its lore.

Unfortunately, none of those collectables really impact the story. Okay, why would they, you might ask. Well, during the game, you come across booklets about supernatural forces and ghosts left lying about by Joy’s mother. Occasionally after an investigation, Joy will ask Ronan if he found any trace of her mother. Whether you did or not, the answer is always no. That’s roughly how linear this game is. You go along with the script without any real input on your end.

The visuals were okay. Nothing that screams next-gen on the PC but more than serviceable. The lighting effect were actually really good and I have to give credit to Airtight for being able to make a game where you can easily identify what you can and can’t clip through as a ghost and not have that clipping break the game either. I don’t know how accurately recreated Salem was in Murdered but it certainly conveys a sense of age and history with the environment design. It looks like an old seaside town so the visuals fit the environment.

It wasn’t particularly well optimized for PC, though. I saw my framerate run from everywhere from 200+ FPS to just over 30. Even optimized for AMD, I saw my framerate tank hard at times and it never seemed to be because of how busy the screen was (there were never many characters on-screen at the same time and very few moving when there were multiple characters on-screen). It was probably a particle or shadow effect that I couldn’t quite pin down myself but it wasn’t all the time, just every now and then.

Speaking of the visuals, most of the game’s dialogue and memory sequences are shown in cutscenes. I guess it’s easier to play cutscenes than render in a whole bunch of new characters and objects for a couple of seconds flashback but why have a conversation with the two characters already there in a cutscene rather than run in the gameplay engine. It’s not like the cutscenes were any better. They looked like they were rendered at 720p (for the consoles, of course) which doesn’t look particularly good if you compare it to the game running at 1080. Maybe below 900 it would look comparably adequate but it just didn’t look good to me. Cutscenes are when the visuals are supposed to shine in all their pre-rendered glory. Then again, maybe I’m spoiled by the cutscenes by Square Enix’s Final Fantasy team who are still the best cutscene artists for my money.

The audio is also something that I’d describe as just okay. As long as you don’t mind read people about town, you would think that voice acting is good, not great. NPCs about town are there to make this seem like a living town where people are chatting on porches, filling up their cars at the gas station or chatting at a coffee shop for hours on end and not moving in the middle of the night when a serial killer is on a one-night murder spree. The NPCs recycle the same dozen or so models and two dozen or so lines. It’s kinda very lazy. If they had people move around, changed their lines and hired more than five voice actors for townsfolk, it would have come off a lot better.

I’m a fan of ghost stories (I’ve done ghost tours in multiple countries to learn about the history of the places I’ve travelled to) and I love detective stories and games. For some reason, this never really resonated with me. Maybe because Murdered never tries too hard to get into either genre. It’s heart isn’t really into the sleuthing or spookiness inherent in either genre. If Airtight had gone more niche with the game, I think it would have benefited from it. Instead with have a very generic, paint-by-the-numbers game that doesn’t do horror or puzzles or ghosts or detectives.

Your enjoyment of Murdered will largely depend on if you like ghost stories, atmospheric games and light (lighter than LA Noire) detective work. I think that there’s an 8/10 game for most people. If there were no elements of the supernatural in here, I’m not sure it would be worth a passing grade. Even though this game should tick all the boxes for me, I was never invested in the game. Even at a short feeling under seven hour playtime, it felt like a grind. That’s a very difficult trick for a short triple-A priced game.

Murdered: Soul Suspect was reviewed on PC but is also available for PlayStation 4, PlayStation 3, Xbox One and Xbox 360. Your impressions of the game may differ depending on the platform played on, PC specs, and if you’re an armchair detective.