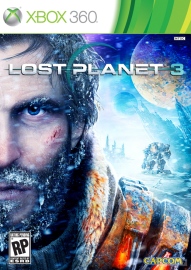 Remember Capcom? Weren’t they a great developer and publisher back in the day? Whatever happened to those guys? Oh, that’s right. Capcom is still in business and making games that do nothing to help their iconic legacy in the industry. The company that brought us Street Fighter, Mega Man, Resident Evil, Devil May Cry and more have hit a bit of a dry spell recently.

The latest disappointing game out of Capcom is Lost Planet 3 which, despite the name, is actually a prequel to the first Lost Planet game. The critics aren’t very fond of this one. The general consensus is that the gameplay is tired, dull and repetitive, even if it does a better job with the narrative than its predecessors.

GameTrailers (77%): Lost Planet 3 isn’t a particularly handsome or graceful action game, but beneath the somewhat dull surface the characters and the multiplayer progression are outstanding. It’s true that a lot of the game feels standard issue; nothing’s really broken but there’s certainly a bit of awkwardness… but there are enough bright spots and interesting people to make it a job worth taking.

Push Square (70%): Solid like a block of ice, and just as unremarkable, Lost Planet 3 is an enjoyable adventure that cobbles together ideas from elsewhere, but doesn’t dig its way beyond the basics. Fortunately, its well-paced story and likeable cast warm the overall experience, melting away most of the gameplay’s rigid shortcomings.

The Escapist (60%): Lost Planet 3 is a solid third person shooter but is marred by some repetitive gameplay elements and a lack of depth with its mechanics and story.

VideoGamer (50%): Spark has made its best game to date, but fails on so many levels the end result is still only a notch above a complete washout. Enemies are dull, weapons are lacklustre (the shotgun is one of the worst I’ve ever used and the melee attack is appalling), the mech isn’t fun, and the multiplayer is blighted by similar issues that real-life foes can’t fix.

Eurogamer (40%): It’s worrying when the nicest thing you can say about a game is that the early sections manage to be boring in an interesting way, but it’s true for Lost Planet 3.