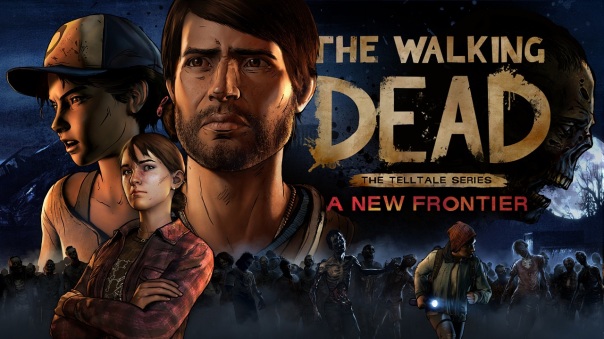 Telltale Games is an interesting enigma in double-A gaming. They’re too big to be your standard indie studio but not quite at that triple-A developer level in terms of the scope or quality of their games. They’ve found themselves a niche by making episodic, story-driven games. Their adaptations of The Walking Dead and Fables (as The Wolf Among Us) launched them into a prestige class above many triple-A developers. Everyone was beating down their doors to get them to make a game of their properties.

After The Walking Dead, Telltale made games based on Borderlands, Game of Thrones, Minecraft, Batman and Guardians of the Galaxy. The only problem is that Telltale has stretched themselves thin on both the creative and technical sides of their business. The Telltale Tool engine is suffering from regular performance problems while the writing quality has been sliding as more is heaped onto their writers’ plates.

The Walking Dead: A New Frontier, the third “season” in Telltale’s TWD saga, might just be a microcosm of the decline of Telltale over the course of just five episodes.

END_OF_DOCUMENT_TOKEN_TO_BE_REPLACED

After a short couple of months, Telltale’s The Walking Dead: Michonne miniseries reaches its conclusion with Episode Three: What We Deserve. If you’ve read reviews of or played the first two episodes, you would know that Telltale is really struggling to capture the essence of one of The Walking Dead’s trademark characters. That’s still apparent in the final third of TWD: Michonne. To use an in-universe metaphor: It’s stumbling home like it’s a walker.

END_OF_DOCUMENT_TOKEN_TO_BE_REPLACED

The Walking Dead: Season Two Review: Through the Valley of the Shadow of Death

Telltale Games had a bit of an up-and-down reputation prior to the release of The Walking Dead. That game completely changed the way that most thought of Telltale and many critics felt that they set the bar for storytelling in games. After the numerous game of the year awards for TWD and a critically acclaimed launch for The Wolf Among Us, Telltale’s second comic book adaptation, The Walking Dead: Season Two was one of the most hotly anticipated games of 2014.

The problem with a game with all that hype is that it occasionally bogs down under the weight. The problem with a sequel is that they struggle to balance the needs of new gamers to the franchise with the desires of people continuing the story. There were times when TWD:S2 caved to these pressures as Telltale tried very hard to copy what made Season One so loved but missing the emotional mark that Season One hit. However, once Season Two came into its own, Telltale had put out another stellar experience.

END_OF_DOCUMENT_TOKEN_TO_BE_REPLACED

Coming into the second season of Telltale’s The Walking Dead, one of the big things people were talking about is how the game would be able to continue with Clementine as the protagonist. After all, she’s just a little girl. She couldn’t fill the shoes of Lee.

Well, literally, Clem couldn’t fill his shoes. Figuratively, once we got all the character introductions out of the way and got into character and plot development, this season took The Walking Dead to heights surpassing Season One. Sure, the episodes are shorter and maybe the illusion of choice isn’t quite as strong as the first season but amazing story and character writing made this game one of the highlights of 2014.

Now we reach the end of Season Two and boy, does Telltale give this season a spectacular send off.

END_OF_DOCUMENT_TOKEN_TO_BE_REPLACED

One of the advantages of being behind on playing an episodic game like The Walking Dead: Season Two is that you can play multiple episodes in quick succession. I didn’t get into the first season until a random Steam Sale so I was able to go through the first three episodes at the same time. There’s something to be said about being able to keep the story rolling by binging episodes. It works for TV so why wouldn’t it for video games?

Once again, my habit of going contrary to the consensus critical opinion continues in this review. While critics rated it as the worst episode of the season, I have it as the second-best. So what did I see that no one else did?

END_OF_DOCUMENT_TOKEN_TO_BE_REPLACED

For some reason, my views of this season of Telltale Games’ The Walking Dead skews opposite of that of most reviewers. While I absolutely loved Episode Two, many were lukewarm relative to me. Then I look at Episode One and most critics liked it more than I did.

Episode Two introduced William Carver, the antagonist for this season of the game, and the story made a turn for the darker which is something that strikes a chord with me. The majority of critics called it the best episode of TWD Season Two when it came out. I won’t go that far but that doesn’t mean this isn’t a good episode of the game.

END_OF_DOCUMENT_TOKEN_TO_BE_REPLACED

After establishing themselves as some of the best storytellers in gaming with Season One of The Walking Dead, Telltale Games certainly didn’t set the world on fire with either Season One’s 400 Days DLC or Season Two premiere All That Remains. While the pieces that made TWD great were there, the heart that made TWD special was missing.

Fortunately, despite having four games on the go right now, Telltale hasn’t bitten off more than it can chew. Episode Two of Season Two is a return to form for The Walking Dead series.

END_OF_DOCUMENT_TOKEN_TO_BE_REPLACED

While politics interests me, I often find it painful to follow and discuss with people. Any optimism I once had about politics has long since been washed away by cynicism. That’s convenient because I’m getting cynical about The Walking Dead since I just assume that it’ll be dreadfully dull to watch and discuss.

Okay, that segue is a pretty poor introduction to this mashup of House of Cards and The Walking Dead but it can’t be any worst than the obligatory “This is awesome!” that this intro by District 7 Media deserves.