← Reports Say the “Next-Gen” Xbox One Will Be Four Times as Powerful as Current Model
Game of Thrones: Blood of My Blood Review →

This September, Motorsport Manager is coming to Steam as a rather impressive looking and much enhanced port. It’ll be the same style of game at its core but will turn the graphics up to 11 and make some aspects of the simulation much more realistic including production of parts, rules charges, calendar changes and more. While the underpinnings of Motorsport Manager won’t change, a lot of it will be upgraded from the mobile game.

But what about that mobile game? I’ve been playing it for a while now and while it’s not quite Football Manager levels of complex, it’s certainly the best management game for motorsport fans I’ve ever played.

If you’ve played the likes of Football Manager or Franchise Hockey Manager, you’ll know roughly what you’re getting into with Motorsport Manager. The gameplay has been simplified for mobile from what the insane depth that you get from PC sports management sims but you can tell where some of the inspiration for this title came from. If you’re looking for a FM / FHM / Out of the Park Baseball equivalent for motorsports and don’t want a simpler experience, you can always wait for the fall. 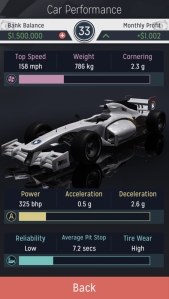 Motorsport Manager gives you ownership of a new open-wheel racing team that starts at the bottom tier of motorsport in national championships and makes you work your way up to the World Grand Prix series. To put it another way for motorsport fans, you start a national Formula 3 team and move up to GP3, GP2 and then F1. To get there you have to win the constructors’ championship, not the drivers’ championship, in a championship tier because the developer realized that motorsport is a team sport.

There are two phases to the game. There is the team management portion that sees you focus on drivers, sponsors and car development and the race management portion in which you are at the track and doing car engineering and race strategy.

Away from the track, you have to manage your driver lineup, setup a young drivers development program, hire engineers for car development, sign sponsors and invest in factory infrastructure. Much like proper Formula One, you need sponsorship money to keep the team going day to day in hopes of a big influx of prize money when the season ends. You can get boosts in sponsorship money by meeting qualifying and race performance goals but you’ll likely need to spend money on drivers and development in order to earn those performance bonuses.

There certainly is some strategy required because you can spend money to make money or try to earn money without blowing the bank but likely with a far slower car than those at the front of the grid. In the bottom tier, you can probably win a championship with one aero or mechanical upgrade but you’ll probably need to hit most of your performance goals to break even in the highest tier of championship.

When you get to the track, things get a little more fun. The race weekend consists of qualifying and the race. Qualifying is a 12-minute shootout to set the starting grid for the race. Like proper open-wheel racing, starting at the head of the field greatly increases your chance of winning. Not only are you trying to put in the fastest time (and you’ll be able to put in two or three qualifying attempts during the session) but you are also trying to find the fastest setup for your car. Your car has aero (downforce) settings of straights, neutral and cornering and gearing settings of acceleration, neutral and top speed. While it’s not a lot of settings to tweak, they definitely make a difference when it comes to your pace so you’re using both drivers as testers for variations from the suggested setup to get the fastest settings.

The race is often more stressful than qualifying because you have to deal with traffic, drivers on different strategies, tyre wear, changing weather conditions and the occasional safety car. Depending on how you want to play the game, you can just let the cars run until they need a tyre change or you can really go deep into the analysis. Depending on how my cars are doing, I’m comparing tyre wear rates, tyre compounds (you have soft, hard and wet tyres), lap times, weather forecasts and track position in order to optimize the strategy. It really is like being on an F1 pitwall but with a minuscule amount of the technology at your disposal. For example, F1 teams will have ongoing simulations to determine what the optimal strategy is before the race and what will result from pit stops or other changes in strategy. You have to figure out this for yourself in this game.

One of the best and worst parts of the game is RNG. In real motorsport, there is quite a bit of luck that determines how well you do. Just ask three-time and twice-defending F1 champion Lewis Hamilton who is on the 4th engine of his five engine allotment for this season after five of 21 races. That same luck tends to befall you more than good luck. Your drivers have more bad starts than good starts which is crippling given the importance of track position. You’ll often have a car not finish a race because of a mechanical failure. You can have a race ruined because of a collision in traffic. All of these things can happen in a real race and there is an attempt to simulate it in Motorsport Manager but it can be frustrating for a great race to end abruptly because of something outside of your control.

That being said, MM is very similar to Football Manager in that while it’s hands-off, there’s a great feeling of accomplishment when your strategy comes together to win a race from mid-pack or when events come together in such a way that you’re perfectly positioned to capitalize. A lot of times, especially if there are no safety cars or changing weather conditions, it feels like you’re on for the ride but there is some level of influence that you can exert to try to salvage a better result (and risking a worse one).

In addition to the standard career mode, there is also a challenge mode. These add various elements for you to overcome en route to winning the Grand Prix World Championship. You can choose between getting no setup guidance (and slower speeds for getting the setup wrong), being forced to use drivers from your young drivers development program and getting only half of the sponsorship and prize money that you normally would. There’s also an ultimate challenge combining the three when you complete them individually. It adds a little variety to the gameplay when you’ve played through a standard career mode but want to keep going with a little challenge. They aren’t big overhauls but it gives you something more to dig your teeth into.

The graphics are okay. The tracks are all 2D with different coloured dots running around the track. It’s a lot like what you would see on an F1 pitwall but the real world is just a black screen with circles with numbers running around. Motorsport Manager only has the coloured dots (no real identifiers of other drivers besides team-coloured dots though your drivers have identifier labels) but there is a background for the track that looks like a stylized Google map. It’s not spectacular, even for mobile, but it more than does the job. The audio is there and that’s about the nicest thing I can say about it. There is one song that loops about every ten seconds and the car sound effects don’t reflect the on-track action. You can safely play this one on mute and listen to some podcasts or your own music instead. 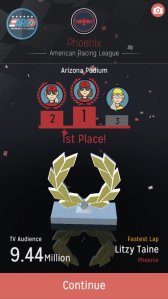 I’ve gone all this way without mentioning the price of Motorsport Manager. It costs all of $2. If you skip your morning Starbucks one morning, you’ve got enough saved to spend on quite a few hours of entertainment. It’s not quite as game-on-the-go as other mobile games that I’ve played but that’s not a bad thing. You won’t confuse it for something for the so-called “core gamer” but it you can get anywhere from ten minutes of play to hours if you so choose.

If you’re a fan of sports management sims, I’m sure you’d prefer to get the mobile version of Football Manager instead. MM doesn’t come close to reaching that level of detail. For my money, though, this is the best motorsports sim on mobile. I really haven’t played many other racing games on mobile but this is easily the one I’ve spent the most time playing.

Motorsport Manager was reviewed on Android but is also available for iOS. This is not the same game as the upcoming Motorsport Manager for PC. Your impressions of the game may differ depending on platform played on, device played on, microtransactions purchased and whether you fancied yourself as the next Ross Brawn rather than the next Michael Schumacher.

Posted on May 27, 2016, in Game Reviews and tagged Christian West, Mobile, Motorsport Manager, Review. Bookmark the permalink. Leave a comment.

← Reports Say the “Next-Gen” Xbox One Will Be Four Times as Powerful as Current Model
Game of Thrones: Blood of My Blood Review →