Football Manager 2015 Review: Every Single One of Us Loves Alex Ferguson

It’s not often that I will follow an annual franchise through year-to-year but it’s interesting to see what work goes into a franchise as the developers change calendars. Most gamers look at the likes of Assassin’s Creed or Call of Duty and write them off as being a fresh coat of paint and a change of venue but not much else. Sports franchises have a reputation for being an annual roster update and not much more.

Having played Football Manager 2014 and comparing it to this year, there’s a bit more to this year’s update to Football Manager than the rosters. There are a whole host of changes to the game that I think makes it a bit more new and casual gamer friendly as well as a few tweaks for those who are far more into the minutiae of football than I am.

Before I start, if you don’t know much about Football Manager, you should check out last year’s FM review. I detail the game in that review and I really want to focus on this year’s changes and my impressions of this game rather than going over the basics again. The heart of the game hasn’t changed. You’re still the man running a football team from the touchline and front office rather than being the superstar on the field. Basically, you are tasked with being better than David Moyes or Louis van Gaal rather than a better Robin van Persie. 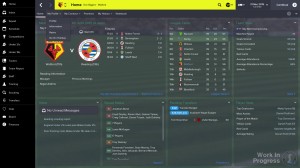 The first change that you’re going to notice from FM2015 is the updated user interface. The important links to the various aspects of the game that affect your job the most are along the left sidebar with a search bar at the top (that doubles as a title bar which is what I thought Chrome was going to for a while) and a contextual sub-menu for that screen just below the top search bar.

I much prefer this setup as the key manager controls and information are always at your hands along the right (except in matches) so you never really get lost on your way to or from anywhere you want to go. Bouncing from my inbox to the squad to the calendar to the training menu was all quick and easy. Last year, it was all hidden in dropdown menus from the top. That’s how I prefer Microsoft Office but the ease of movement in FM2015 starts it on the path to being more user-friendly.

In terms of new player friendliness, tool tips are plentiful. Right from starting a new game, you can choose how many tool tips you want. They’re all available by scrolling over conveniently placed yellow circles. Some have question marks to indicate they’re tool tips but some are numbered to walk you through the steps you should take on the screen. Clicking on the circles removes them so you don’t have to worry about tool tips clogging up your screen. This wouldn’t work or be necessary for all games but I think that this is a tool tip system that more PC games should consider poaching because it’s very new user-friendly which isn’t something that I would have considered saying about any aspect of last year’s FM. 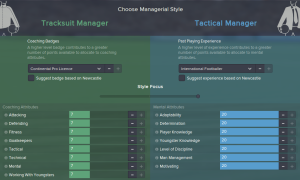 One way that bridges the new player friendliness while also giving gamers a bit of a self-administered difficulty curve is the new manager ability setup. You can set the abilities of your manager by determining if he’s a tracksuit manager (a training specialist) or a tactical manager (a specialist in working on the touchline). You can do this by setting your coaching licence level and your playing experience and then using a slider bar to determine your focus. This sets your manager’s attributes.

Okay, it’s not quite a difficulty setting tool because the difficulty of the game will be down to how good or poor at FM2015 you are but presumably you’ll have and easier or harder time preparing your team for a match and keeping them in line between matches.

Talking plays a bigger part in FM2015. In addition to the various press conferences, you can be interviewed in the tunnel before or after a match as well as on the training ground. Team meetings can be broken up into groups so you’re not talking to everyone at once or individually. If a number of players share a concern, you can speak to them as a group, for example. You will also be doing some shouting from the touchline. In case you can’t quite sort out what tactical change to make, you can shout instructions to your players just like a real manager. Often, I’ve found shouting “Get creative” elicits the scoring chances I’m desperately looking for. Sadly, there isn’t a “pull your heads out of your arses” shout.

And for those of you who are really into the fine details of your football operation. There is more depth to go into when it comes to training with the addition of teaching preferred player moves that try to teach tendencies to your players so they can play to their strengths and that of your formation. Scouting also gets an overhaul to make the growth of your scouting knowledge and player filtering more similar to real-life. Basically, if you want to succeed at the higher levels, scouting is going to need more of your attention. 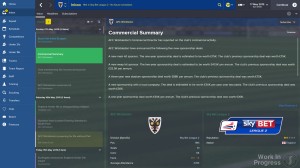 By and large, the changes to Football Manager 2015 have been aimed at new and casual FM fans. After my intimidating experience last year, I don’t mind the overhauled interface and noob features. They got me into the game faster and are likely to keep me around longer than last year’s game. In fact, I’ve already put in more time for FM15 for this review than I did last year’s game. So I’d call the changes mission accomplished.

If taking control off all the various aspects of a manager’s job is a bit intimidating, Football Manager Classic is a way to ease your way into the game as the default settings take a lot of the minutiae off your plate. You’re tasked with taking charge of a team but you can offload a lot of the day-to-day work to your assistant manager. I won’t call it the closest thing to a play now mode because there’s still a pile of management work to be done but it’s usually less than the proper FM mode.

The Challenge game mode is still in there. I wish someone used this to create a single game or tournament mode. There is still the possibility that someone could create it and upload it to the game’s Steam Workshop for download. Looking at FM2014, only 33 challenges were created and over half were titled “Wealthy Investor” so my optimism for the challenge system wasn’t repaid. However, that doesn’t mean that it isn’t worth spending time in that mode if you’re looking for something a little harder than just managing a football club. Some challenges are hard but not soul cripplingly difficult. Trying others are indicative of a deep-rooted self-loathing. They aren’t the main focus of FM2015 but are a nice diversion if you want to do something different.

In addition to the overhauled user interface, the in-match graphics and engine have been given a lot of work. Last year, I wrote that the player animations were stiff and robotic. I later told a friend that players looked like marionettes dancing on strings. This year, Sports Interactive says that they’ve added some two thousand animations to the game through motion capture (done at Creative Assembly’s studio). The animations aren’t perfect (the review beta sees players occasionally skating along the pitch like Spyro in the hockey minigame from Ripto’s Rage [which I could win in my sleep because I’m Canadian]) but it is clear that the player animations are far more fluid and realistic.

SI also say that the player models, stadia models and lighting engine have all undergone improvements in the last year to make those aspects of the game look better. I couldn’t really tell if there was a difference in the visuals without seeing the games side-by-side. Maybe if you spent dozens or hundreds of hours with FM, you’ll notice a difference.

There were a few bugs but whether they are a case of review beta being beta or something that will carry forward into the final release is something I’m not sure about so I’m going to err on the side of caution and tell you.

Most of the issues I’ve seen have come in the various dialogue options. I’ve seen the same dialogue option pop up twice in the lists of four or five possible answers to a question. Sometimes, the answer to a question doesn’t match the computer’s follow-up. In that instance, I told my Captain that I wanted to name a new Vice Captain (since he wasn’t getting nominated as a substitute any time soon). However, he was quite certain that I was going to sack him and had to talk him down. Maybe the game thought that it was changing dialogue to the VC but it didn’t show on the display.

Otherwise, there are issues with some running animations skating as mentioned earlier. Throw-ins are ridiculously overpowered to the point of being preferable to free kicks and corners. The opposition scored a goal on a header from a throw from about 30-yards-plus out into the six-yard box. Stupidly long and accurate throws weren’t the exception unless there was a close option. And who knows if your defenders will attempt to get the ball off the opponent. 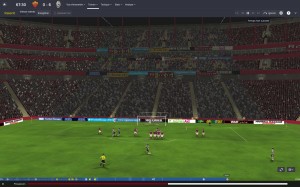 Maybe it’s just having another year of experience with Football Manager, but I really enjoyed my time with FM2015. In the nearly two weeks that I’ve had the review copy, I’ve put in more time into this year’s edition than I did last year’s.

The tricky thing with reviewing Football Manager is that it’s a niche product that appeals to very diehard football fans. A niche game that is among consistently among the top ten most played games on Steam but it’s not in danger of challenging EA Sports’ FIFA franchise for sales. That doesn’t mean that this game can’t appeal to people who are just casual fans of football or a specific team. It’s just a different way to play football but it’s certainly not less enjoyable.

The changes aren’t really massive this year from a gameplay standpoint. It’s certainly got a nice visual once over that fans who update every year will appreciate. From where I’m sitting, it seems as though the emphasis is on newer players but there are still tweaks in there to satisfy the diehards.

Football Manager 2015 was reviewed on Windows PC but is also available for Mac OS X and Linux. Football Manager Handheld 2015 will be released at a later date for iOS and Android. A review beta copy of this game was provided to et geekera by Sports Interactive. Your impressions of the game may differ based on platform played on, PC specs and whether you think that you’re closer to Sir Alex Ferguson than David Moyes and Louis van Gaal ever could be.