There are a long list of people who belong in Arkham Asylum. For example, Lady Arkham and the Penguin are good candidates to be locked up for being criminally insane. Perhaps the criminally insane are the folks over at Telltale who have been lacking in technical and creative drive when it comes to putting out a quality Batman game. Or maybe I’m the insane one for expecting The Walking Dead quality releases from Telltale every time.

While Batman: Episode 4 – Guardian of Gotham isn’t the worst episode that Telltale has released but it’s also not their best either. At the very least, it’s a promising setup for the concluding episode of the series.

Spoiler Warning: As I usually do with Telltale games, story points from previous episodes may be brought up in this review. If you haven’t played the first three episodes of Telltale’s Batman, you are likely to have some of it spoiled. There will be quite a few spoilers for Episode Three in this review so consider yourself warned.

After the events of the last episode, Bruce finds himself locked up in Arkham Asylum, an ironic punishment considering his family’s history (in Telltale canon).While the teaser at the end of Episode Three sets up a promising episode based on the change of pace. From that teaser, I inferred that the episode would take place inside the Asylum. It’s a shame that maybe 15 minutes did because it would have been a nice change of pace to see Bruce Wayne at the mercy of the criminally insane with teasers of future storylines and cameos by famous Bat-villains as Bruce tries to aid Gotham while locked up. 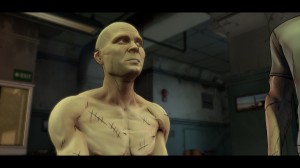 Instead, you’re given a largely inconsequential part of the game in Arkham. There’s a long on-rails walk with a few scripted events. You meet a famous nemesis who feels like he’s in here in order to establish him for a bigger role next season. The only noteworthy part of the Arkham sequence is that aforementioned nemesis giving you info about Lady Arkham / Vicky Vale that continues to put their own spin on Batman lore by bringing up the seldom mentioned Arkham family. It helps to explain some of Lady Arkham’s actions but doesn’t explain terrorist attacks and general anarchy that the Children of Arkham are planning. It’s plays like a vendetta against the whole of Gotham rather than retaliation against the three Gotham families that wronged the Arkhams.

And that was about the sum of exciting story developments in this episode. The remainder of this episode was about Harvey Dent and his decent into madness. The game doesn’t even try to hide it. The “he’ll remember that” notices at the top-left of the screen only ever call Dent “Two-Face” (at least, that was the case in my playthrough) as if there was any doubt that he might still be sane and objective. You sleep / looked like you slept with a guy’s girlfriend and he’ll go mad with power to get back at you. At least, that’s what the game is setting you up to believe regardless of how you played the rest of the game.

The rest of the villains are nowhere to be found. Okay, there’s one decision that will send you on two different paths that would hypothetically see you face a member of the Children of Arkham but it doesn’t fit with the rest of the Bruce/Batman vs. Dent storyline that the rest of the episode feels like it’s built around. There is one actual scene that deals with Lady Arkham that doesn’t feel like it has been somehow influenced by Dent/Two-Face’s actions. So while the majority of people dealt with the Child of Arkham lieutenant, the logical place for the story to go was to wrap up the Dent story in this episode. 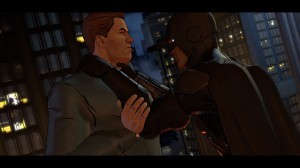 We’re likely to see either decision get nullified in the grand scheme of the story. Telltale teases us with these big decisions only to have these branching story paths come back together in the end. I can’t help but feel that your decision of whom to confront at the end of the episode won’t matter by the end of the next episode. It speaks very poorly of Telltale that I anticipate that my decisions won’t actually matter because that’s what they’ve conditioned me to do.

From a technical perspective, I found this game to be a mess on Windows 10 Anniversary Update. The load times were excruciating and the framerate was more akin to a slideshow than a video game. Basically, it was Telltale’s Arkham Knight. I had to rollback the update (oh, so heartbreaking to roll back that POS update) but it did make the game work somewhat better. The framerate was closer to a steady 60 but it was still prone to stuttering that made me close to missing QTEs and even dialogue trees. It’s not great technically but it seems to be a small improvement over previous episodes.

This is also the shortest episode of Telltale’s Batman so far. From start to finish, including menus and the recap, this was a 75-minute episode. Granted, I’m not surprised because Telltale tends to make short penultimate episode as these set the stage for a grand finale. However, paying $5 for an hour-and-a-half episode that isn’t particularly spectacular certainly could and should be a turn-off for some gamers.

I really want to like this game but Telltale just isn’t giving me anything to work with. There’s only one scene that seems like it could have any emotion to it but Batman and Bruce Wayne are so disconnected from their feelings (though Bruce can come off as a bit of a sociopath) that you can’t feel it. The only time Batman seems like a person is when Catwoman or Alfred are around. If Telltale wants to make a splash with the finale, they’ll be the targets. (And you know Selena’s going to show up in the final confrontation with Lady Arkham.)

Maybe Telltale can pull it all together in the end. They have been able to do that with Tales from the Borderlands which I wasn’t the biggest fan of (which is down to not caring for the source material) but that had a strong finish. I still want to believe that Telltale are good storytellers and kudos for trying to tell their own Batman tale here. They really need to finish the whole story in the next episode because the pieces have been lacking for depth.

Batman – Episode Four: Guardian of Gotham was reviewed on Windows PC but is also available for PlayStation 4, Xbox One, PlayStation 3, Xbox 360, Mac OS X, iOS and Android. The review code for this game was provided by Telltale Games. Your impressions of the game may change depending on platform played on, PC specs and if this game makes you feel like you’re losing your mind.