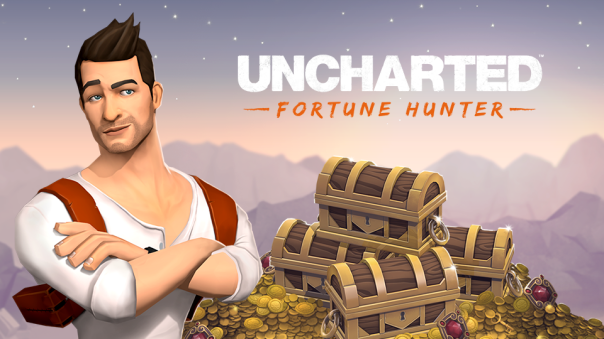 It’s not unusual to see big game franchises get mobile spin-offs as part of their lineup. Square Enix has mobile games for Final Fantasy, Tomb Raider and Hitman. Nintendo is working on a move into that sector. EA has a whole host of mobile titles too. Now, Sony is dipping its toes into the mobile sector with a puzzle game based Uncharted that’s more of a booster pack for Uncharted 4’s multiplayer than a new entry in the franchise.

Fortune Hunter is definitely not to be confused with the four main Uncharted games or the PS Vita launch title Golden Abyss. There is no platforming or combat. This is straight puzzle-solving on in a 2D environment.

While many people criticize the fairly simple puzzles in the main Uncharted games, Fortune Hunter cranks up the puzzle difficulty. Granted, the puzzles all follow the same general idea of going from the starting point of the puzzle to unlocking or reaching a treasure without getting killed. Trying to kill you are dart cannons and spiky death squares. Those death traps are triggered based on the number of squares moved. The trick is not only figuring the right combination of triggers to unlock the treasure at the end of the level but also charting a path that keeps you from being in the line of fire of dart cannons or stepping on a spiky square when it’s timed to impale you. 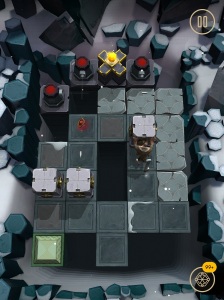 The usual comparison for this game seems to be Lara Croft GO. It’s an easy one to make because the main games are quite similar and the basic idea of focusing on puzzle solving as a way to hunt treasure. There are some differences, though. Lara Croft GO does movement one space at a time and the levels have vertical movement. Uncharted takes place on one 2D level. There is some 3D elements in that some blocks will rise and fall but it’s mostly a 2D plane.

Unlike most free mobile games, there are no lives or death timers or anything that’s preventing you from playing the game. As a result, you can try as many times as you want to beat the puzzle. Given that the game encourages large movement rather than a step at a time, you will need to exercise some trial and error so figure out the right movement paths to navigate through the more difficult levels. Occasionally, you pick up orbs in levels and these can be used to either simplify levels or reset you to your previous position when you get yourself killed. It’s a nice little get out of jail almost free card but I almost never used those orb “cheats” because they really weren’t needed.

For the most part, the puzzles aren’t that difficult but difficulty will occasionally spike to frustrating levels. There aren’t many impossible levels but you will occasionally get one that makes you question what is happening. These usually happen near the end of an area so it shouldn’t be a surprise and you do have the benefit of unlimited retries. That being said, at least the difficult puzzles aren’t unfair. New puzzle mechanics are introduced in a fairly easy introduction puzzle rather than dropped into a level to kill you unfairly. 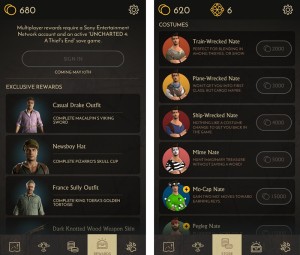 The strangest thing about Fortune Hunter is that it’s free and the microtransactions are basically superfluous. It exists mostly to give you boosters and cosmetic options for Uncharted 4’s multiplayer. Sure, there’s a game to be played but I don’t see it appealing to anyone who wouldn’t otherwise be an Uncharted fan. These boosters are in chests that are available every few hours and are unlockable using keys that you earn by completing puzzles in fewer moves than specified in the level. Since you can go back and retry the level as many times as you want, you can learn how to do a level in dozens of moves and immediately go back to beat is in a half-dozen moves or less to earn the booster chest key.

The graphics are done in a cartoonish way. It’s cellshaded colouration with an exaggerated Nathan Drake model. There is some music and sound effects but I’m fairly convinced that everyone expects people to play mobile games on mute so no effort went into it. The best part of the graphics is the loading screen art which often shows Nate playing on his phone as drawn in Nate’s journal. It’s a nice little meta nod. I was disappointed that there was no voice work. Even if I can hear Nolan North and Richard McGonagle’s voices in my head, I would have much preferred that they voice over the couple dozen lines of dialogue written for Fortune Hunter. 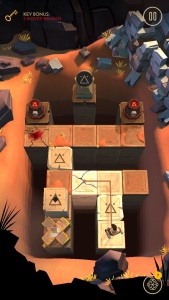 The fundamentals of the game are fine but the problem with this game is that it’s solely here as a promotion for Uncharted 4. Sure, there are supposed to be one more set of puzzles coming soon™ but does anyone really care unless you’re regularly playing the Uncharted 4 multiplayer and looking for the freebies from playing this game. There’s a decent game here but the longevity is tied to the life of the game it’s promoting.

I’m probably overthinking this. You’re going to get a few hours of a good puzzle-solving game for absolutely free. There’s absolutely nothing wrong with the game as is, even if there isn’t much longevity. I think I’m looking at this as a typical free-to-play game when it’s just a game. As a game, it’s a fine experience but nothing more than that.

Uncharted: Fortune Hunter was reviewed on Android but is also available for iOS. Your impressions of the game may differ based on platform played on, device played on and whether puzzle-solving is a sufficient Uncharted experience.