Ori and the Blind Forest Review: Games as Art

How long does it normally take to figure out if a game is any good? It’s not a topic I’ve ever given much thought to until I started writing this review. Ori and the Blind Forest makes a very strong first impression with an opening scene that is guaranteed to make you cry in the first ten minutes of the game. It doesn’t take you long to realize you’re playing one of the best games of 2015.

Ori and the Blind Forest is a very classically inspired side-scrolling platformer with some modern twists. While it all starts simply enough with jumping and firing mechanics, as you progress, new unlock new abilities for either attacking or moving. The game world is designed to make use of your new mechanics as soon as you get them but if you backtrack, you’ll find a lot of unexplored territory to traverse. 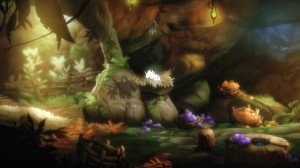 What immediately sets Ori apart from every other platformer I’ve played is the sheer beauty of this game. Every piece of the game world has this amazing attention to detail given to it so that everything looks amazing from the moss and branches to the backgrounds. It all has this hand-drawn aesthetic that makes it look like it’s straight from a painting. This might actually be the most beautiful game ever made. And, yes, I’m including Journey in that comparison.

Backing up the impressive visuals is the original score composed by Gareth Coker. Much like Journey, Ori relies heavily on the soundtrack to convey the mood. Even without much voice acting (it’s all indecipherable noises that sound faintly like someone trying to speak), Moon Studios does a fantastic job of telling a story through visuals and music. While I love the storytelling in Life is Strange or in some Telltale games, you don’t need top voice actors and a big writing department to tell a great story.

Ori and the Blind Forest stars Ori, a little forest spirit who slightly resembles a rabbit. The great forest that Ori inhabits dies at the start of the game due to the actions of an evil bird. As the last living inhabitant of the forest, Ori goes on an adventure to restore the forest and the Spirit Tree at its heart. 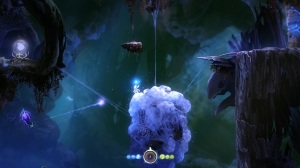 The game isn’t just a story about jumping around, zapping enemies and solving puzzles. Ori and the Blind Forest is a story of exploration, growth, love and understanding. As we progress, what seems like a simple story of a little spirit trying to save his forest opens up to something with a deeper meaning. It’s not a complicated story but it humanizes all of the characters we meet.

It’s the combination of top-notch visuals, audio and story that would make Ori and the Blind Forest one of the best games of the year, even if the gameplay was fairly simple and standard. Fortunately, the gameplay underpinnings of Ori are equally as fantastic as the rest of the game.

At its core, Ori is a platforming game. It starts as a simple push A to jump and X for your little light orb buddy Sein to zap an enemy. As mentioned, you gain new skills as you explore the forest to help you navigate to your next goal. In addition to that, there is an ability tree to help you power up the skills you’ve unlocked.

It all seems simple enough at first but it continues to do so as new abilities are introduced too. While you end up with around ten abilities from just being able to jump, the introductions of the new abilities is so well spaced out that you never feel overwhelmed. You get your very typical ability spam introduction but you’re given time to acclimate to it and integrate it into muscle memory before the next ability is introduced. Even better is that you will be going through almost all of your abilities on a regular basis. The game is designed in a way that none of your abilities feel useless. Except maybe stomp.

More important than anything, the controls are fantastic. They’re crisp and responsive. You feel like you’re in control of every action Ori takes so when everything goes pear-shaped, it’s the person behind the controls that is at fault. 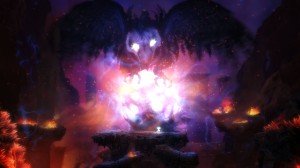 The one negative about Ori is the difficulty. There is no difficulty setting so it’s just you against the game. And like an old school platformer, this game can be frustratingly hard. I had long stretches where I didn’t touch the game because it could be controller-throwingly difficult. That being said, the checkpoint system where you can set your own save point to respawn from and infinite lives does provide a little bit of forgiveness from the difficulty.

As a result of the difficult, though, you have this massive sense of accomplishment from progressing in the game. Completing a difficult escape or platforming section is reward enough but they’re often accompanied by a beautiful cutscene or cinematic which makes the whole experience so much better.

I suppose that would be another positive. This game is fantastically paced. It follows the hectic platform sections with these beautiful and peaceful follow-up sections. It really yo-yos your heart rate up and down but I think that’s part of the appeal. I feel like other platformers (or at least the older ones I’ve played) are mostly go-go-go. Being able to take a little pause to admire the scenery is a welcome design choice.

Looking back on Ori and the Blind Forest, I’m actually having a hard time scoring it. It all comes down to what the standard is for one of the all-time great games. Could a game that is so beautiful and near-perfect get a really high score when I wouldn’t name it game of the year and many other outlets would give it a pass?

The thing is that Ori and the Blind Forest should be the game of the year. It’s one of, if not the most, beautiful games ever made. The music was superb. The gameplay was challenging but not impossible. The story was told in such a simple way but it conveyed so much feeling though just sound and visuals without a triple-A writer or voice cast. It really is one of the best games I’ve ever played.

The more I think about it, the more I’m convinced that Ori and the Blind Forest is a legendary game. It’s only fitting that this is the game that scores our first 10.

Ori and the Blind Forest was reviewed on Windows PC but is also available for Xbox One. Your impressions of the game may differ depending on platform played on, PC specs and whether you have the heart to cry in the first five minutes of this game.