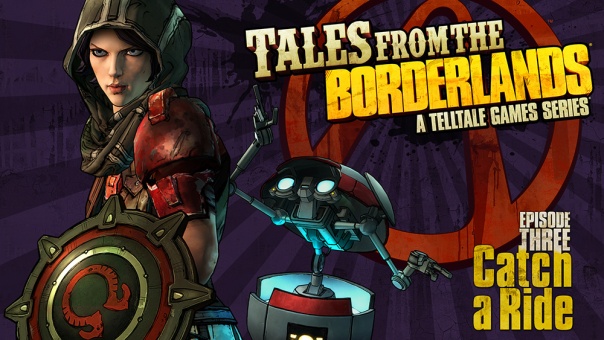 I’ve never really understood how Telltale can be so good at writing these episodic narrative arcs but be so completely incapable at writing the second episode of those stories. They go from great starts to non-existent follow-up and that certainly dampened my enthusiasm for the third episode of Tales from the Borderlands. Fortunately for Telltale, they aren’t too bad at bouncing back from a subpar effort and certainly did with this episode of TFTB.

Spoiler Alert: As per usual for my reviews of Telltale Games games, I will try to keep the reviews as spoiler-free as possible. However, the previous episodes are fair game to be spoiled. And if you want to talk about the proper Borderlands games in the comments, I won’t stop you. I don’t particularly care enough to play them so have at it. 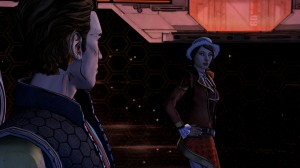 Picking up from the previous episode, the cliffhanger that sees Rhys choose between Fiona and Handsome Jack to get them out of that jam at the end of the episode apparently causes some differences at the start of this episode depending on your choice. I’m not going back and playing through three hours of TFTB to make one different choice (I don’t get ad money on etg despite being a WP recommended blog for well over a year now) and no one is getting into too much detail about the differences between the choices so I can’t comment on how it plays out differently. I’d imagine there’s be some different dialogue but I can’t imagine that you’d find massively branching storylines.

Other than that opening, I haven’t read too much about branching paths in Catch A Ride. It seems to be the standard helix story design that Telltale typically uses. If you haven’t read too many of my Telltale Games reviews, the helix story is a story that diverges or branches at a point but comes back together later down the line so everyone ends up playing effectively the same story.

Anyway, this story sees everyone pair up outside of their usual tandem so that we have a little bit of character development. Very early on, Vaughn is taken out with a tranquilizer dart. That leaves Rhys to pair up with Sasha, Fiona to join up with Athena who clearly wasn’t a villain in the last episode and Loader Bot to hang around with the Gortys device.

It’s really hard to develop characters if they’re just going to be doing the same things with the same people in each episode. While the ladies have been given their opportunity to shine as the competent characters in TFTB, Rhys is finally given a chance to be seen as more than just the bumbling fool, Sasha gets to be more than the sidekick, Fiona aspires to more than just being a con artist and Loader Bot starts to show a personality. Giving the characters some actual character makes this episode of Tales from the Borderlands so much better than the previous two. 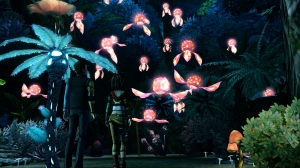 One thing that Telltale does really well is its characters. They’ve been given a chance to flex their comedy muscles with Tales from the Borderlands and left the characterization at home for the first three hours of the game in order to work in their slapstick. Don’t get me wrong, TFTB had some funny moments but they’re far better in Catch a Ride. Giving us some actual characters instead of caricatures goes a long way in letting the jokes hit home. It’s sort of how Andy Dick was funniest on NewsRadio when his shtick is largely unchanged over the years. Give a man a good character and the jokes mean more and are therefore funnier.

From a gameplay perspective, Catch a Ride has a lot more action and a lot less downtime. Fiona gets a box of bullets so you don’t have to worry about when to use her single bullet. That was probably a smart design choice because no one could have really expected that using the one bullet early in the season would have worked. This way, you get to do the promised shooting but with the elemental bullets as an RPG twist. Also, make sure you’ve invested in good QWASDE keys because you’ll be hammering them for QTEs regularly in this game. At least Telltale is keeping you awake with regular QTEs.

Back to things I picked up from other reviews, I read in Jim Sterling’s review that character customization was available through a New-U station. Using the cash you’ve picked up in-game, you can customize the look of the four main characters and Loader Bot (so the five protagonists, really). However, Jim was the only one to mention that. I don’t doubt that he’s right but it doesn’t reflect well on the level or game design when there’s a feature that I’m sure plenty of people put time into and almost no one realizes that it’s there.

As for bugs, Telltale has finally cleaned up the game. Maybe they just didn’t let Gearbox anywhere near it. I only noted one instance of buggy visuals compared to it happening regularly in the previous episode some four months prior to the release of this one. 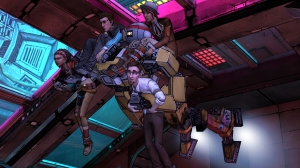 After a relatively poor second episode, Tales from the Borderlands has a much better showing thing time out. We start to see something resembling character development from the two main characters, some okay humour and gameplay that starts to get both more of an action and Borderlands spin. In other words, this episode is the first proper sign that TFTB is going to be a proper mix of the best of Telltale and the best of Borderlands.

Oh, and Chris Hardwick barely had a line all episode. Why am I not giving this episode a 10/10?

Tales from the Borderlands – Episode Three: Catch a Ride was played on Windows PC but is also available for OS X, PlayStation 4, Xbox One, PlayStation 3, Xbox 360, iOS and Android. The review code for this game was provided by Telltale Games. Your impressions of the game may change depending on platform played on, PC specs and how much you love the Borderlands games.