I know these episodic reviews of Telltale’s games aren’t exactly the most timely but the increasing length of time between Telltale’s releases aren’t exactly speedy either. We’re getting to the point where I’m not exactly sure that Telltale will be able to complete Tales From The Borderlands during this calendar year since the gap between releases is just over three months.

So some three months after it was released, I’ve finally gotten around to reviewing the second episode of Tales From The Borderlands. It would have been a lot easier to review this is I felt any passion for this product but I’m not entirely sure that I don’t feel a little more passion than Telltale does.

Spoiler Alert: As per usual for my reviews of Telltale Games games, I will try to keep the reviews as spoiler-free as possible. However, the previous episode is fair game to be spoiled and I’m going to do so in the next line.

We ended the last episode with Rhys seeing a hologram of Handsome Jack in his head. As someone who isn’t a Borderlands player, I’m vaguely familiar with Jack but apart from knowing he’s the Borderlands 2 villain, his introduction meant absolutely nothing to me.

I think that’s why I’m going to find this episode a lot less enjoyable than Borderlands fans. Everyone in the game was talking about Jack being this impossibly evil man but I didn’t see it in this episode. Sure, he didn’t seem like such a stand-up guy but he was probably the best character in the episode. He had the best lines and might have been just about the only one, other than Patrick Warburton’s Vasquez, that got any real laughs out of me. Okay, the Loader Bot was also funnier than the main cast.

Now, it shouldn’t be a spoiler but the four protagonists were split into the same pairings that they were introduced in. The split perspective is the key storytelling mechanic and it is fun to see certain moments from the other protagonist’s perspective. Interrupting the other character while recounting the story to their captor in order to tell it accurately is a pretty decent way to get a laugh. Also, Fiona mocking Rhys won’t get old. He sort of deserves all the crap people can heap on him.

It felt like most of our time was spent with the boys but I don’t particularly care for either Rhys or Vaughn. I find their co-worker Yvette, who has been making sporadic appearances in the games from Hyperion HQ, to be more interesting than Rhys or Vaughn. On the plus side, the two ex-Hyperion employees had Handsome Jack and Vasquez holding their story up.

Maybe it’s because Rhys seems to be solely motivated by greed. Okay, Fiona and Sasha are also motivated by greed but they’re just con artists trying to make ends meet. I find that more relateable and redeemable than a guy who thought he deserved a promotion and tried to office politics his way ahead through theft. Okay, maybe I just hate office politicians. But Rhys’s motivations seem a bit more cartoony than Fiona’s so I just can’t get behind them. Maybe that’s why I’m not buying into the boys.

I find that Fiona and Sasha have really carried these first two episodes. They’re the humour and heart of these episodes. Even if you have to remove the contributions of Handsome Jack and Vasquez, I think that the result is a net positive for Tales From The Borderlands.

That all being said, this episode wasn’t without good moments. Anytime Vasquez or Jack is on screen is brilliant. The opening sequence with Rhys coming to grips with his new holographic friend and the rest of the team trying to find their way out of the predicament at the end of the last episode. Fiona and Sasha meet someone that is apparently a familiar face for fans of the Borderlands franchise in what was an entertaining dialogue sequence.

Entertaining sequences, however, were pretty few and far between. There was a big monster chase at the start of the episode and a separate chase involving the girls. We got a couple of puzzle sequences to solve. Apart from that, there wasn’t much in the way of action sequences. It felt like the majority of the episode didn’t have much happening between the start and the end that moved the story along. The story was, effectively, trapped, puzzle, chase, separated, reunite, puzzle, end. Stuff happened at the beginning and the end but I didn’t feel like we saw anything meaningful in the middle.

One thing this helps me realize is that we’re always talking about female empowerment in games but do we really need a character to be Lara Croft to be a positive portrayal of a woman in a game? Fiona and Sasha are the smart, competent and interesting characters who can actually hold their own in a fight without a robot or holographic business executive to save the day for them. To me, that’s a more positive portrayal of women in video games than making them action movie heroes. But I also shouldn’t be surprised because Telltale usually does a very good job with its female characters.

The gameplay and graphics are the same as you might remember from the first episode are back here. The single-shot gun that Fiona has gets an extra bullet (or a fresh bullet if you used it in the first episode) and an added elemental effect. I guess that counts as Telltale putting their own take on the traditional shooting mechanics you would expect from a Borderlands game.

The voice acting is once again top notch. I think we’ve come to accept that as the norm for a Telltale game but it’s worth mentioning just the same.

One thing that I have to bring up again with Tales from the Borderlands is technical glitches. Last time out, I had a near-system crippling blue screen of death moment in addition to a couple of crashes. That’s been cleaned up this time. I got through all 100 minutes of this game in one go. 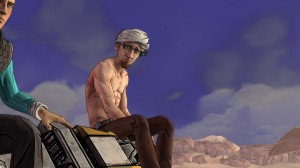 Unfortunately, the graphics suffered the brunt of the technical issues this time. Random objects would appear or disappear from the screen. In one scene where our heroes fly on the loader bot, there is the outline of the top of a mountain floating along just ahead of them (bottom-right of that picture to the right). There were also countless moments where one of our protagonists would be listening in a conversation for their head to snap around and quickly snap back to normal.

They aren’t game breaking issues nor do they really destroy the game in any meaningful way. It’s just annoying that Telltale has been working in this engine for years and it still has quite obvious glitches in this game and only this game. Did Gearbox’s Aliens: Colonial Marines team do some work on TFTB? 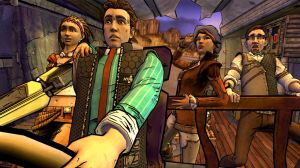 Having played this around the time that I played Episode Four of Game of Thrones, the dichotomy between the stories of the two episodes of those two games was amazing. Game of Thrones felt like it was powering forward with a big push into the final episodes while TFTB fell into that usual Telltale trap of biding time during that second episode.

So I guess that’s my real problem with this episode. It’s just a placeholder and it took Telltale nearly four months to come up with. That’s a bit disappointing to see something that could have so much effort put into it only to really have very little shown in execution.

Tales from the Borderlands – Episode Two: Atlas Mugged was played on Windows PC but is also available for OS X, PlayStation 4, Xbox One, PlayStation 3, Xbox 360, iOS and Android. The review code for this game was provided by Telltale Games. Your impressions of the game may change depending on platform played on, PC specs and how much you love the Borderlands games.