The Bad, The Ugly and The Worst: A Look at Evolve’s DLC and Pre-Order Plans

I don’t know how many times that people have to be told not to pre-order games for it to sink in but I’m not sure that it will matter. For all the convincing pitches that game companies themselves make with games that are broken on launch or otherwise in need of a lot of work to be considered of triple-A quality, publishers are coming up with ever more convincing pitches to get you to pre-order games or upgrade to more expensive editions of the game and it all comes down to money.

It used to be that pre-order perks were limited to things like skins or weapons or other little bonuses that didn’t really make that big of an impact on the overall game. Those traditional pre-order bonuses should not be confused with the setup that Turtle Rock Studios and 2K Games have come up with their latest hoped triple-A money printer Evolve.

In order to move pre-order copies of Evolve and to sell the various deluxe editions of Evolve, Turtle Rock and 2K have come up with one of the most complicated and ridiculous DLC schemes in recent memory. People have actually come up with charts in order to keep track of what is included with which version via pre-order, purchase, season pass and a la carte. Evolve might be one of the better games this year but its DLC will make it one of the most controversial at the same time.

Let’s start with the good parts of Evolve’s DLC scheme. Turtle Rock has promised that new maps won’t be charged for. That means that everyone with the game will get access to the new maps so no one will be locked out from playing with anyone else because they bought a map pack. That’s something a lot of other multiplayer shooters could learn. Have you played Titanfall in the last three months? Those DLC maps are virtual ghost towns. Granted, any game mode that isn’t Attrition is a ghost town but that’s probably more down to design than pricing.

The other good thing about Evolve is that just because someone is using a piece of DLC content, it doesn’t prevent you from playing with them if you don’t have that content yourself. Now, that’s just standard practice for any multiplayer game. Why does this guy look better / have a different character / have a better gun than me? Better buy it. That’s just good business sense.

So that brings us to how Turtle Rock and 2K are dividing up content between the various versions of the games, what’s available as pre-order bonues, what will be a part of the Season Pass and what will be offered a la carte. User havoc0000 on the IGN boards put together this chart showing what is available when with each copy of the game. You’ll probably want to click to enlarge.

That Evolve is coming with a whole pile of pre-order bonuses and editions isn’t a surprise considering that it’s a triple-A game. It shouldn’t surprise anyone keeping up with game news either because Evolve announced its first pre-order bonus (a new monster that ended up being the Behemoth and a skin for the Goliath monster) back in January 2014. Yes, Evolve was trying to sell you pre-orders and DLC 13 months before release and some 10 months before most gamers got a hold of it in the Big Alpha. Screenshots weren’t even out but the pre-order plan was.

To make matters worse for gamers, in an interview with OXM, Turtle Rock Studios co-founder Chris Ashton said that “we believe that we’ve built a game [Evolve] that does support [DLC] really well–more so than any game ever before.” Yes, that’s the head of a triple-A studio effectively saying that they built a game that was designed as a DLC sales and delivery system. 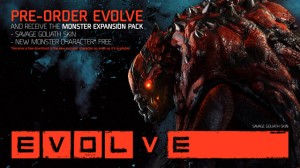 Currently, to have everything that Turtle Rock has promised to deliver on top of the base game, it’ll set you back $100 for the PC Monster Race edition and $110 or more (depending on which edition you buy and when you buy it) if you get any other version of the game aside from that. What does that extra $40+ get you? Promised as DLC are four Tier 4 hunters, two Tier 5 hunters and a Tier 5 monster. If you don’t pre-order, then you don’t get the Tier 4 monster which will set you back an additional $15 unless you get a version that’s more expensive than the base game.

My problems with Evolve go far beyond money and more to the principle of the matter. There is such a thing as good DLC. People don’t look at the Lair of the Shadow Broker DLC from Mass Effect 2 and say “what a waste of $10.” I recall an episode of the Co-Optional Podcast in which the hosts specifically cite Shadow Broker as an example of a great DLC that was worth the money. People talk about big expansions like XCOM: Enemy Within and Diablo III’s Reaper of Souls as examples of DLC that improved the base game because of their existence.

The problem with Evolve goes way beyond the high prices and overcomplicating the once simple concept that $60 bought you a complete game and the more recent concept of the $60 plus a season pass buying you a game and all of its DLC. The tenants of the game’s design are what I’m most at odds with.

While it’s expected that games will come with DLC nowadays, seldom is DLC so expensive, so fragmented into different options that require some of it to be purchased a la carte and so blatantly transparently done in such a way as to maximize revenue rather than improve the quality of the game or gamer satisfaction that this might give DLC a worse name than any other game.

While DLC can often come off as a quick cash grab, usually some effort is put into it. Let’s go back to Mass Effect. Sure, ME3’s DLC was pretty poor compared to the Shadow Broker (Citadel excepted) but they gave us an expansion to the story, fresh dialogue, new characters, new weapons, new locations, new music, new, new, new. What are you getting from Evolve? The two new monsters are valued at $15 each. The new hunters are valued at $30 for the four Tier 4s and $15 for the two Tier 5s. If you don’t pre-order, Season Pass or Deluxe Edition Evolve, that’s eight characters for the low, low price of $75. Or to make it sound like more of a bargain, that’s only $9.38 each!

When you total everything up, getting all of the content that will end up being available for Evolve means that you will end up playing twice for one game. The first $60 gets you 12 hunters, 3 monsters and all the maps for the game (unless you pre-order so you get a fourth monster). The second upwards of $75 gets you six more hunters and two more monsters. That’s half of the content for more money than the actual game. And that’s before Evolve adds on more characters as DLC and since the game is built to move DLC, I don’t think that anyone would be shocked to see Tier 6 or beyond hunters and monsters.

If Turtle Rock said that they were designing new characters all the time and that they would include the first sets with the game or have the Season Pass save you more than $5 compared with the individual prices of the DLC offered, their DLC scheme might have gone over better. If Turtle Rock hadn’t advertised all of its DLC upfront and rather tried to figure out unique additions to the game beyond new characters that hopefully aren’t pay-to-win. Unique, worthwhile additions to games are what separate great DLC from the generic stuff that you download with your season pass to get to the good stuff.

It’s just a shame that despite the way that Evolve, Turtle Rock and 2K has setup the DLC and broken up the gamer base by how many hundreds they’re willing to spend on it, the game will still sell like hotcakes. As of writing, Evolve is the top-selling game on Steam and I’d imagine that will be the same at retail stores around the world. That will just reinforce to 2K that they made the right call with the DLC setup. For all the BS, people won’t be so outraged that they won’t jump aboard the hype train.