Tales from the Borderlands – Episode One Review: There Ain’t No Rest for the Wicked 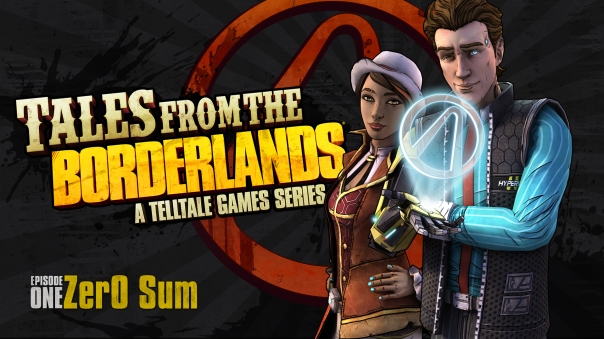 I’ve never really been a big first-person shooter fan. Maybe it’s coming from a console background in my youth rather than PC but I was never really into FPSs. So I’ve never been into the Borderlands franchise. Sure, I’ve got some ten hours into the first game and my sister knows the franchise inside and out (she’s the FPS player in the family) but I’ve never been compelled to keep going with those games.

That being said, I’m a big fan of the last couple of years of content from Telltale Games. While I haven’t had time to get to The Wolf Among Us (though I hear it’s fantastic), The Walking Dead seasons have been absolutely fantastic so of course I’m going to pick up the next game from Telltale. So can a merger of genres and developers that may not necessarily work at first glance come together to make another Telltale and Gearbox classic?

The first thing that should be said is that this is not The Walking Dead. There aren’t really any dramatic moral choices that an episode is emotionally built around. Sure, people will still remember things just like your standard Telltale game but it’s more of a comedy than a drama. Of course, you would expect that for a game based on Borderlands. 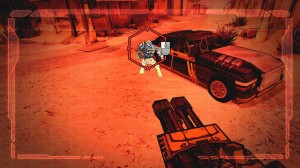 Similarly, this isn’t Borderlands. The promises of shooting being closer to the Borderlands FPS style didn’t come true. Shooting is done in the Telltale style that you previously saw in The Walking Dead. Want to shoot an enemy? Click the big read circle over the enemy and watch the action play out. The gameplay is your standard Telltale point-and-click adventure game with the usual dialogue options and limited time to pick one.

As a hybrid of the Telltale style and the Borderlands style games, it finds a nice way of balancing the two. While all the gameplay is pure Telltale Games, all of the writing and graphics style would fit in perfectly in the Borderlands franchise. So if you’re looking for a game that favours one style over the other, it may not be to your taste.

As the teasers showed, there are two main characters for us to follow and you play each at different points in time. The guy is Rhys, a Hyperion middle manager who is looking to make his way up the corporate ladder. The girl is Fiona, a Pandoran con artist who is looking for the next big score and payday. Circumstance brings the two together reluctantly and hijinks ensue. 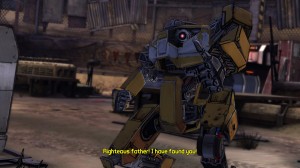 Okay, the end of that last paragraph sounds a bit disingenuous. TFTB is written in the style of Borderlands, as mentioned, so there’s an emphasis on comedy rather than meaningful plot and character development. There are some decent jokes in there, a little bit of dark humour and some slapstick too. Personally, I thought the Loader Bot (who does your shooting for you) had the best lines of the episode. So character writing could use a little bit of focus between now and Episode Two.

The way the story is told is pretty unique. Leveraging the two playable characters, the story of how the two came together and what they did when they were together is told from both perspectives. The episode starts with Rhys telling his tale to a bandit who had kidnapped him. That seemed pretty straight forward but things really pick up with the introduction of Fiona who has also been kidnapped by the same bandit.

Bringing together the two different characters with two different perspectives and a neutral third-party is the first thing that really drives some characterization. It shows that everyone is really in it for themselves and you can’t trust anyone. Until the midpoint of the episode, it was pretty unremarkable. Showing the differing perspectives and contradictions in tales gave a quick injection of fun and excitement that had been lacking to that point. As long as it’s effectively used, I wouldn’t mind more of the unreliable narrator gimmick. 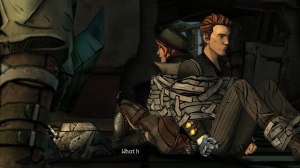 Unlike TWD, I didn’t find any of the characters particularly compelling. I won’t say that I didn’t like them because they’re not exactly great people. Both Rhys and Fiona are trying to step on other people to get ahead in life so they’re not the hero type. The problem is that they haven’t even established themselves as the anti-hero type that you can root for. They’re just people in a story through the first two hours of the game. The ending brings a little hope for the future but it wasn’t the best Telltale episode ever.

Not having a lot of time with the Borderlands games, I don’t have any first-hand impressions of the voice acting. I have heard good things about a few of the actors in Borderlands 2 but that’s about it. Fortunately, overall, the voice acting is pretty good. Telltale has assembled a mostly-star cast for the game with Troy Baker and Laura Bailey in the lead roles as Rhys and Fiona. As you would expect, they do exemplary work. Not as solid was Chris Hardwick whose inexperience stuck out like a sore thumb when attempting just basic conversation. Once he was surrounded by loud noises and needed some feeling, he fell in line with everyone else.

One of the fun things about the voice acting is that we get the two most often heard video game voice actors side-by-side in this game. Troy Baker and Nolan North both appear in TFTB and it’s an interesting contrast in vocal style. 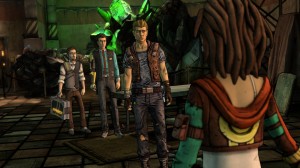 Nolan North’s voice is unmistakable. He’s been in so many games that everyone knows that voice now. And while he’s able to change the pitch and accent to an extent, there’s an underlying level of Nolan-ness underneath it that you can always pick out. Troy Baker, on the other hand, is a vocal chameleon. How many different roles has he been in that have had different voices. The man takes voice acting to the point of being a pure art form.

And while they’re both very different in terms of execution, they’re both incredibly good at what they do. I find it absolutely amazing that Telltale was able to pull together the two top gaming male voice talent for their new game, have them both star and get top-quality performances out of them. Well, I think that’s worth mentioning and just wait until I get to Game of Thrones.

Normally, I don’t have to talk about technical issues in Telltale games because the Telltale Tool has been thoroughly put through its paces over the years. However, I had two problems trying to play the game. The first time the game died on me is when it disappeared while on the pause menu. It just stopped showing and gave me my desktop instead so I had to Ctrl/Alt/Del the thing closed. When I tried to restart, I got a blue screen of death. My computer really fought me on that reboot. I thought it was toast afterwards.

Also, this game goes a long way between autosaves. I was very surprised that it doesn’t even autosave at loading screens (of which there are plenty) so I lost a lot of time at my crash. I’d say that I lost 10 minutes which might not seem like a lot but it is a two to two-and-a-half hour episode so it’s not an insignificant chunk of time lost. I’d give you a better idea of how long the game was but crashes and whatnot make it hard to more accurately peg the exact time. 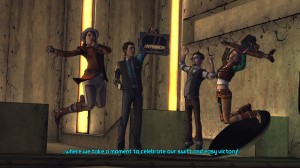 The problem with these episodic games is just like a TV series. Sometimes an episode can be great on its own but sometimes it has to be there solely to set the pieces for the rest of the story arc. In the case of TFTB Episode One: Zer0 Sum, it’s very much a set piece for the rest of the season (or whatever Telltale refer to it as). It’s establishing the characters, setting and mood that we can expect for the rest of the year.

And despite not being a Borderlands or FPS fan, I still found the game enjoyable. No, it’s not as good as The Walking Dead but even that didn’t get off to the strongest start in either season. Telltale needs a little time to get things off the ground. I wouldn’t be surprised if I came back with an eight or nine rating for the next episode. For now, it’s just good, not great. I’m sure fans of the Borderlands franchise will like it more. Maybe you can wait until the next Steam sale or for another episode to come out.

Tales from the Borderlands – Episode One: Zer0 Sum was played on Windows PC but is also available for PlayStation 4, Xbox One, PlayStation 3, Xbox 360 and PlayStation Vita. The review code for this game was provided by Telltale Games. Your impressions of the game may change depending on platform played on, PC specs and whether you want a Telltale game or a Gearbox game.