Doctor Who: Death in Haven Review 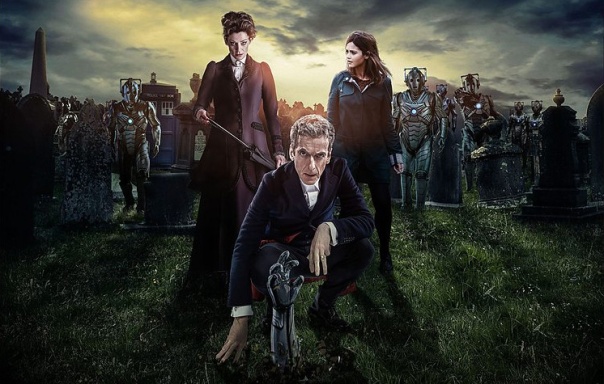 The first eleven episodes of this season of Doctor Who have been absolutely brilliant. We’re used to sporadic good episodes but such a succession of great episodes in 10 of the first 11 weeks of Doctor Who is something that no TV show this side of maybe The Wire or Game of Thrones have been able to match.

Well, my prediction from last week didn’t quite pan out exactly as written. I figured that Danny would save the day but I think I liked the way I did it a bit more than the way it came off in the episode.

The problem I tend to have with Doctor Who finales is that they do a good job of building to the climax but the resolution is always far too quick and often peppered with too much deus ex machina for my liking. So the build up to the climactic moments was great but the payoff was only so-so.

The buildup to the final sequence with the return of UNIT, the armies of Cybermen, the Doctor being named the President of the Earth and the escape of Missy were all well written moments. Even Missy giving her Cyberman army to Twelve saying that he always wanted an army to save the universe from the forces of evil was brilliant. Granted, that probably worked because of all the flashbacks to questions of The Doctor’s dedication to peace and passivity.

So while the buildup worked, The Doctor throwing the Cyberman control bracelet to Danny and letting him control the Cyberman army kind of threw the episode apart for me. Danny gets the CyberBracelet and suddenly realizes that he can save the day if all the Cybermen blow themselves up in the CyberClouds in order to disperse them. Okay…?

The problem is that the solution came out of absolutely nowhere and The Doctor wasn’t the one who actually saved the day. It was almost as if he saved the Earth solely through luck. It doesn’t even combat Missy’s point about all the people who sacrificed themselves in The Doctor’s service as Danny did that too (even if he was already dead prior to this). It’s almost as if all the mentions of the Doctor using his companions was more of a self-fulfilling prophecy rather than a prelude to The Doctor doing something ridiculously daring on his own to save the day.

But on the other side, helping matters this week was the fact that everyone was absolutely spectacular in their roles this week. Peter Capaldi, Michelle Gomez and Samuel Anderson but in spectacular performances that kept me gripped to the show every time they were on-screen. In a season of great performances, these three saved the best for last.

One thing that didn’t work for me in this episode was those little romantic moments between Danny and Clara. I know that it was supposed to hit me right in the feels but I just haven’t really been invested in the Danny and Clara romance as much as Moffat would like me to be. I think that’s mostly because I like Twelve and Danny really put Clara in a him or me situation. I think that Danny having to deal with the pain of being a Cyberman and then fighting against his programming to save Clara was supposed to be the emotional cornerstone upon which this episode was built.

Conversely, I thought the goodbye moments between The Doctor and Clara were fantastic. Both lying to each other in order to make the other feel better about leaving the other behind, if only temporarily. Both hugging so, as Twelve put, they don’t see each other’s faces which would have exposed the pain they’re hiding from each other that lies just below the surface of the lies.

Now that we’ve finished the season, I don’t think that this season was about Missy or Danny or death or the Doctor acclimatizing to his newest incarnation. If anything, it was about the friendship of The Doctor and Clara. It was established in the last Christmas special that part of the reason Clara tagged along with Eleven was because she “fancied him.”

Since Twelve is old enough to be her father, she doesn’t have the same reason to travel with him. So why are they still paired up? Because they’re friends. In the transition between Eleven and Twelve, they had to reestablish the friendship and the parameters of what they are looking for from that friendship and this is something that we’ve seen evolving over all twelve of Twelve’s episodes. We’ve gone from the two being very distant and confrontational to the two being friends and getting back to caring about each other.

Perhaps the theme of the season and overarching storyline wasn’t about Missy, death and the afterlife. Perhaps this year was about the power of friendship but not in the friendship is enough to overcome all evil and save the day in a deus ex machina sort of way that I would have associated with Russell T. Davies.

And normally, I’d save this last discussion for the random points of note but I loved all of the Brigadier moments in this episode. Growing up in the 90s, the Space Channel here in Canada would air old First, Second and Third Doctor adventures, I did see Brigadier Lethbridge-Stewart in his prime. So for me, seeing the respect and admiration that The Doctor and the Brigadier shared for each other some 25 years after their last adventure (in 1989) and hundreds of years of The Doctor’s lives. That final salute just hits you right in the feels.

Though it does bring up an interesting point that I realize while watching Sunderland vs. Everton while writing this review. Remembrance Day is on the Tuesday following this episode’s airing. With a very militaristic tone to the episode and the sacrifices that the “army of the dead,” as Danny put it, made to save the living could be taken as a metaphor for the men and women who sacrificed themselves for their country in military service. It might not have even been intentional but it was a clever little metaphor.

Overall, I was a little underwhelmed by the big finish to this episode’s A-plot but the surrounding 55 minutes of the episode were good enough to make this an excellent finale to an excellent season. Hopefully this much effort goes into the next season of Doctor Who. I’d hate to think that we’ve been spoiled by one great season of the show.

The next time we check in with The Doctor isn’t for another six weeks. The thirteenth Doctor Who episode of 2014 won’t be until Christmas for the now-traditional Doctor Who Christmas special. In keeping with the theme, Santa Claus will be making an appearance on the show played by Nick Frost. What will Santa bring The Doctor and Clara for Christmas? I’m hoping for a parody of popular Christmas films with Twelve taking over for Simon Pegg and Moffat taking over for Edgar Wright. In terms of my Christmas wishes, that’s the one most likely to happen.