GameStop catches a lot of flack for their used games trade-in program. Most people feel that the scheme gives sellers too little money compared to what GameStop is able to resell them for. When you take a look at the setup of the program, you can see that it’s geared very specifically to keep money inside GameStop’s “ecosystem” and throws a whole bunch of qualifiers at clerks and customers to do so.

Now, GameStop’s overhauling their trade-in scheme. It simplifies all the variables that affect the price sellers get and increasing the base price for reselling a game by 20%.

It may not have seemed like it to some but GameStop says that the base value of trade-in games was $9.00. Starting on August 18th, the new scheme increases the base price to $11.00. They deem that to be a 20% increase in base value over the previous base so I’m guessing they’re not going to give you the full 22.2% elsewhere. The current scheme offered a whole pile of extra incentives on top of that for trading in and applying the credit to new items or trading in a bunch of new games at once but this new scheme simplifies that to differentiating between trade-ins for cash and trade-ins for credit.

One would assume that the tiering of games and their values wouldn’t change with this update. After all, that copy of NHL 2002 for the PS2 that I probably have gathering dust somewhere won’t be worth $11.00 if I trade it in next week (despite the awesome soundtrack that game had). Similarly, trading in a copy of The Last of Us: Remastered would probably be worth a couple of dollars more.

Kotaku was able to snag slides from an internal presentation to GameStop employees about the new trade-in program. 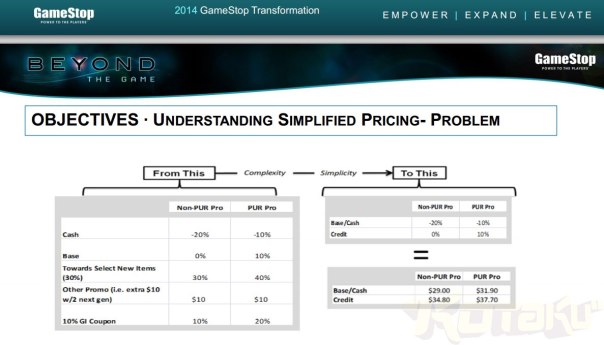 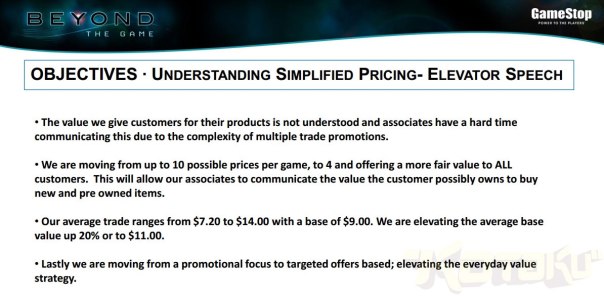 The reasons for GameStop trying to jump-start the trade-in program with increased values are twofold: 1) With more people going digital with games, they’re trying to keep the physical market alive with trade-in incentives. It’s a consideration that some gamers will probably undertake when deciding between buying from their console’s digital retailer or from GameStop. That $10 price difference for digital might not be worth it if you can go physical and get more than $10 in trade-in value for your game. And 2) Other games retailers are moving into the used games market and offering trade-in values above GameStop. They’re now competing with the likes of Wal-Mart, Best Buy and Amazon for your used games. Considering how important used games are to GameStop’s bottom line, they don’t want to lose ground.

Posted on August 6, 2014, in Games and tagged Business of Gaming, Gamestop, Used Games. Bookmark the permalink. Leave a comment.