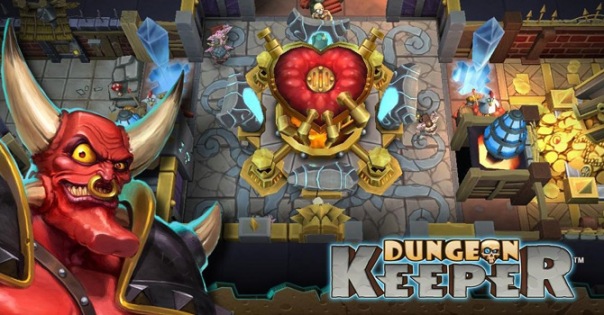 No, I’m not letting this go. I’m not sure what the worst thing about the free-to-play mobile edition of Dungeon Keeper is. The denigration of a much heralded franchise for a quick buck is pretty bad. The fact that the game isn’t so much free-to-play as it is fee-to-play with microtransactions that are hardly “micro” isn’t any better. Maybe it’s the fact that the game is likened to Clash of Clans in Dungeon Keeper clothing after we talked about King ripping off and being ripped off by other games.

But enough of what I think. Let’s see what the critics have to say.

“With a quick tap of your ungodly finger, you can harvest gold and ore resources, lay down defensive infrastructure, and send your imps scattering to do your bidding. Building out your dungeon and lording over its many moving parts occupies a good chunk of your time here. Luckily, action-packed raids balance the resource gathering and dungeon expansion elements out nicely.” – MacLife (8.0/10)

“Credit where it’s due, EA’s Mythic studio has revived that gameplay style very accurately. The viewpoint is loftier, the art style more cartoony, but almost every feature from the 1997 game remains in place.” – Eurogamer (1.0/10)

“It’s free to wait, but not to play anything. There’s nothing to actually play. “Playing,” in Dungeon Keeper consists of opening it up when you remember once a day, poking a few things on the screen, then closing it down and finding something else to do for anywhere between four and twenty-four hours.” – The Escapist (1.0/10)

“Gems can be used to speed up just about every facet of the game, from summoning units and building rooms to digging out thicker rock formations and beyond. It’s rare that ramping things up will actually push you to rely on in-app purchases for gem packs, since unlocking in-game achievements earns you more gems to speed up these tedious timed tasks, but their inclusion still feels omnipresent to the point of feeling a bit icky in their implementation.” – MacLife (8.0/10)

“Of course, of course, the economy is stacked in such a way that you’re forever being steered towards the gems. Progress is impossible without upgrading your various rooms, and to do that you need gold or rock, your stockpiles of which have a finite ceiling that must be raised by upgrades. Upgrades which require gold or rock. By constantly ratcheting up the amounts required, the game creates an ingenious but ruthless domino effect. You need to level up your workshop, but to do that you need more rock than you can store, but upgrading your rock storage means saving up more gold than you can store, but upgrading that… and so it goes on. The head bone, in this case, is connected to the wallet.” – Eurogamer (1.0/10)

“The game will constantly remind you if this fact, as you slowly wait for everything to unfold before your eyes. It’s like EA saw dollar signs after the success of Clash of Clans, and wanted to clone it in the worst way possible — by using a respectable IP as its skin.” – Destructoid (4.0/10)

I read ten reviews. Those were the only mentions of graphics and audio I found.

“I love the original games immensely. But when I dove into this version I was expecting a freemium sim, and that’s exactly what I got. In fact it was better than I expected thanks to some clever tweaks to the standard formula and a theme that fits surprisingly well. It’s totally not a portable Dungeon Keeper, but it is an enjoyable freemium sim.” – 148Apps (8.0/10)

“Dungeon Keeper is not a video game, not any more. Instead it’s just a virtual beggar, constantly demanding your spare change and offering nothing in return.” – Metro (0.0/10)

“I’m a big defender of most games – even ones I hate – when somebody says they’re “not a game.” The accusation of something not being a game is a blinkered and often weak form of noncommittal criticism. In the case of Dungeon Keeper, however, I can find no defense. It isn’t a game. It’s a cynically fabricated cash delivery system.” – The Escapist (1.0/10)