It’s all aboard the hype train as we run down the last few hours before the launch of what is undeniably our first proper next-generation video game console. The PlayStation 4 is going to be the first next-gen console out of the gate.

Chances are that you’re up to date on the latest PS4 news and are adequately hyped (or jaded, if you’re an Xbox fanboy) but just in case you aren’t, it’s time for the return of et geekera’s Hype Train.

First, let’s start with the specs.

On paper, the PlayStation 4 is the superior machine. No impartial hardware expert seems to deny this. There is some disagreement as to how much the PS4 out paces the Xbox One. I’ve seen estimates everywhere from around 10% to upwards of 50%. Whether the games for the PS4 actually look 10% to 50% better than the XB1 will probably depend on the developers and publishers.

This power advantage does seem to be giving the PS4 an early advantage in the visuals department. While the Xbox One has been catching flack for some of their big games being released at 720p, the PlayStation 4 hasn’t had any resolution controversies with most of its major releases coming in full 1080p. On the flip side, there are some issues with the framerate on those higher-resolution PS4 games being noted by the press but other folks are noting that the Xbox One’s games aren’t immune from framerate drop either. 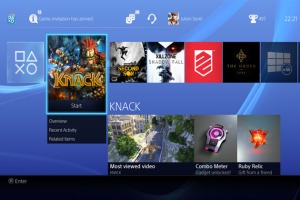 The downside of Sony going with the GDDR5 RAM is that it’s a type of RAM that’s currently used for graphics cards rather than most computer processes. As such, it’s probably not a surprise that I saw a post on Reddit that the PS4 isn’t the swiftest machine in moving between apps. On the game side of things, an IGN video showed the PS4 booting into and out of games at lightning speeds.

Speaking of downsides, the PS4 doesn’t currently have support for MP3 playback or media server functionality thanks to the removal of Sony’s DLNA software. Sony is likely pushing you towards using their Music Unlimited and Video Unlimited services on the console. However, Sony Computer Entertainment Worldwide boss Shu Yoshida says that he’s heard the feedback from the gamers on the matter and will looking into whether these features can be patched in later.

At its heart, it’s a gaming machine so the most important thing about the PlayStation 4 (and Xbox One, for that matter) shouldn’t be what apps it has, how fast it does apps or what sharing functions it has. The important thing should be the games.

Compared to the Xbox One, the PS4 is lacking on triple-A exclusives right at launch. However, if you’re buying a console solely based on launch titles, you’re doing it entirely wrong. We’re going to have these consoles for years (with Microsoft estimating a life cycle of up to 10 years) so if you’re going to pick one over the other based on launch titles, you might miss out on other games or established franchises that will show up down the road.

The three exclusive launch titles that have reviews have had a mixed bag of reviews. Knack got a bunch of reviews saying it was a charming little platformer that was worth a buy but many more complaining about how easy and lacking depth it was. It’s almost like it was a game aimed at kids when there aren’t any games aimed at kids anymore. Killzone: Shadow Fall got better reviews thanks to stunning visuals though reviewers were disappointed that there wasn’t a massive next-generation leap in gameplay.

The killer app for the PlayStation 4’s launch might be Resogun. It’s available for free at launch to PlayStation Plus subscribers and has been getting great reviews. Housemarque, the devs behind Dead Nation and Super Stardust, are back with a PS4 shoot ’em ‘up that pushes the graphics power of the new console and provides a challenge for anyone looking for one from the new console. I shouldn’t be surprised that Housemarque hit the marque with the new console.

The new touchpad on the front of the DualShock 4 is certainly a new offering for the home console (Wii U not withstanding because I’m not sure anyone owns one). Some of the early reviews are mixed. Some games are using it well like Killzone but AC4 is suffering input lag. Whether this is a hardware or software issue remains to be seen but I’d hazard that it’s probably the latter. If one game can get it working but the other isn’t doing as good a job, it’s probably a software optimization problem.

If I can take a moment from the disingenuous “hype training,” I really don’t like the idea of reviews and review scores for the consoles already. I’m not a fan of review scores at the best of times but thanks to patches and drivers, the new consoles are really in a state of evolution and will be for years. The day one patch for the PS4 wasn’t released until yesterday which is also when the reviews started coming out. The reviews might not even reflect the console you pick up tomorrow let alone the console you might buy if you get it in 12 or 18 months time.

So is the PlayStation 4 going to live up to the hype and be all that you hoped for from the next generation of consoles? Discuss and argue that one in the comments.

Sources:
AnandTech – The Xbox One: Hardware Analysis & Comparison to PlayStation 4