← EA Repeats as Worst Company In America and are Trying for Three-in-a-Row
Is Community A Postmodern Masterpiece? →

The Organ Trail Review: Better than The Walking Dead Finale

I should have written this review before I saw the season finale of The Walking Dead. You spend the majority of the season building up this inevitable confrontation between Rick and the Governor, the prison and Woodbury. What we end up getting is just an awful pay-off that doesn’t make sense. Presumably, this was Glen Mazzara’s revenge for getting fired.

And that brings me to the Organ Trail. No, not The Oregon Trail. The Organ Trail is an homage to the classic Oregon Trail and the zombie survival genre of movies that sees you try to traverse from Washington, D.C., to a safe zone on the west coast while fighting zombies, eluding bandits and just trying to make it in one piece.

If you’ve played The Oregon Trail, you’ll recognize the style of the gameplay. You lead a group of survivors on a cross-country trek in a station wagon. Along the way, you have to take care of your crew, scavenge for food, trade for the essentials to keep your wagon on the road and deal with a zombie apocalypse.

All of that seems relatively straight forward but there are the classic Oregon Trail random events that occur while travelling between points of interest. Your car can breakdown. Survivors get sick. Supplies get damaged. You meet other survivors. Oh, and there are zombies. Sometimes they bite survivors. Other times, you have to ford a river of zombies… or the zombie apocalypse facsimile there of.

Despite the random events and sort of roguelike nature of an Oregon Trail homage, it never feels exceptionally frustrating or soul-crushingly difficult. I will admit, though, that it sure seems like the random events start making life very difficult as you near the end.

In addition to the campaign mode, there is an endless mode. In Endless Mode, you take your survivors from location to location without progressing along the map as in the campaign. As you progress, the game gets harder which means that it will eventually end. However, I still found it easy enough that I haven’t met my end in this mode yet.

And I should note that the game’s old school visual style doesn’t translate over to the audio. While the sound effects and some of the music are reminiscent of older computer games, some of the music is modern. The Men Who Wear Many Hats did a very good job with the audio. 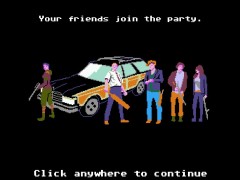 I really liked The Organ Trail. I never really understood the original The Oregon Trail. However, you throw in some interesting mechanics in the game and mix in some zombies and you have a fun game to play. At the end of the day, all you want is some fun playing games. There’s a reason it quickly jumped to the top of my recently played list on Steam.

And, yes, the story mode is much better than the plot of The Walking Dead’s season finale.

The Organ Trail: Director’s Cut was played on Windows but is also available on Mac OS X, Linux, iOS and Android. The original The Organ Trail is also playable on Flash. Your impression of the game may change depending on your PC specs and if you aren’t tired of zombies yet.

Posted on April 11, 2013, in Game Reviews and tagged PC, Review, The Men Who Wear Many Hats, The Organ Trail. Bookmark the permalink. 1 Comment.

← EA Repeats as Worst Company In America and are Trying for Three-in-a-Row
Is Community A Postmodern Masterpiece? →