Two months after they released the Extended Cut DLC, BioWare released their second single-player DLC mission for Mass Effect 3. The Leviathan DLC promised to look at the history of the Reapers. The new mission takes the game for a dark and eerie turn over its three-hour play time for the price of $10. Those numbers put it right in line with Mass Effect 2’s Lair of the Shadow Broker but can ME3’s first post-launch single-player DLC stand up to the epic Shadow Broker DLC?

Spoiler Alert: There will be some minor plot spoilers for the Leviathan DLC and various spoilers from the rest of the game. If you don’t want anything spoiled, I’d skip the first four paragraphs of this review.

Leviathan is a pre-ending DLC. Based on the fact that the trailer and teaser pictures for the DLC showed Shepard, that shouldn’t come as a surprise. The Leviathan DLC’s missions are available from after your visit to Palaven at the start of the game through to launching the final offensive against Cerberus HQ. You activate it by reading a message from Admiral Hackett which unlocks the location on the Citadel where you begin the mission. 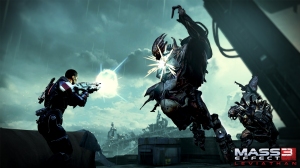 Leviathan sees Shepard brought in to help a science team investigating Reaper legends. The legend of the Leviathan of Dis, first mentioned in a planet profile in Mass Effect 1, and what killed the Reaper corpse that started the legend is being investigated by the team. Shepard uses the team’s research to track down what killed the Reaper corpse at Dis and see if he can ally it to his cause before the Reapers can stop the Leviathan permanently.

As this is a pre-ending DLC, the story feels out of place. Most of us have already completed the game and had to go back to the middle of the game to play this DLC. If you’ve completed the game and moved on, Leviathan doesn’t add to the story enough to feel particularly noteworthy. While it’s similar in length to Lair of the Shadow Broker, it feels as important to the story as Overlord. It adds to the lore of the series but not in a way that’s need-to-know. There’s a bit about the origin of the Reapers that’s interesting but, again, nothing critical to the game.

Prior to the launch of the DLC, BioWare revealed that the Leviathan DLC would slightly alter the end sequence of the game. It doesn’t add a new ending option or alter the outcome of the game in any way. It does add two new lines of dialogue in the final conversation between Shepard and the Star Child. So if you were hoping that giving BioWare $10 would give you a better ending, you’ll be very disappointed. Still, if Leviathan triggered better endings as a result of its completion, that would have caused an even bigger sh*tstorm than the original endings.

One of the highlights of the game is the atmosphere. While you do make frequent visits to a lab on the Citadel to go over Leviathan research, you are whisked away to a few new worlds. There is a mining facility in an asteroid belt that if filled with people indoctrinated to the point where they act and sound like zombies (or husks, really). It reminded me of ME2’s Overlord DLC because of the creepy atmosphere where you know that something has gone wrong and trouble is about to pounce on you but you have to press forward into danger to find out why and try to save these people. There is a colony on a cliffside that features a battle scene that rivals and maybe surpasses the final battle on Earth in terms of spectacle. 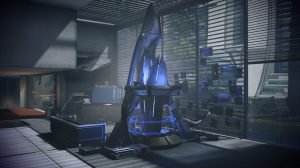 Not surprisingly, there isn’t much new in terms of gameplay introduced in Leviathan. Two new weapons and some new weapon mods are introduced. While I enjoyed sorting through evidence and searching for leads, there wasn’t anything new. It’s the same standard look around and hit the action button when you find something. How thorough you are in your detective work determines how much blind searching you have to do in the galaxy for persons of interest and clues.

If you don’t play multiplayer, Leviathan does introduce two gameplay elements that you haven’t seen before. The first is multiplayer’s escort objective in which you and your party stand near a holographic drone to escort it to its destination. The second borrowed multiplayer objective is the object recovery (jokingly referred to as “pizza delivery” on the BioWare forums) in which Shepard has to take a package to a specified destination. Again, they aren’t new if you play multiplayer (which most ME3 gamers were obligated to do in order to get the best endings prior to Extended Cut) but still it’s a change of pace when it comes to the single player part of Mass Effect.

In short, there really isn’t much new in terms of gameplay. If you liked combat in the rest of ME3, you’ll like combat here. Personally, I didn’t find it as challenging as the rest of the game but maybe that’s because I’ve honed my skills in multiplayer. The addition of the quasi-detective elements are a fun change of pace. However, the detective work isn’t really that deep or rewarding because the only difference between good detective work and lazy detective work is having to search the galaxy map a little long for the locations you need to go. Also, the heavily hyped picture of Shepard underwater was really just a promotional tool. You walk along a straight path and have a conversation that lasts four times as long as you spend walking underwater.

Surprisingly, graphics are far and away the best part of the Leviathan DLC. For a game that was never considered top of the line in terms of graphics, BioWare’s artists seem to go out of their way to dispel that notion. There are beautiful spacescapes visible outside the asteroid mining facility, a spectacular war zone at an archaeological dig site and, of course, the gorgeous underwater sequence. These really might be the most spectacular visuals in the whole Mass Effect series.

The voice acting is another highlight of this DLC. All of your squadmates are back with new dialogue. It seems as though Tricia Helfer had the most free time to do voiceover work because EDI accompanies you any time you visit the researcher’s lab. The new secondary characters are the highlight as they sound just so perfectly creepily indoctrinated. Leviathan’s voice acting is even better as Anthony Skordi gives a deep (literally and figuratively) performance as the DLC’s titular character. If anything, it’s the voice acting that gives Leviathan DLC its unique ambiance.

It’s hard to really evaluate a DLC designed to extend the story when the story is complete. Anyone who really wanted to play Mass Effect 3 has played through the game and has moved on. If you really liked the game, endings included, you probably wouldn’t have a problem coming back to fill in a blank that never really felt like a blank. Somewhat similarly, if you’ve read all the Mass Effect novels and comic books and have a desire to know as much about the Mass Effect universe as possible, you probably want to play this DLC.

However, if you’ve played through Mass Effect 3 and weren’t happy with the ending, considered your Shepard’s story finished or have just moved on from ME3, there’s nothing for you to come back for. If you’re in the middle of a playthrough, I can understand playing this. However, it just feels odd to come back to a point in time and story that I’ve already passed to play Leviathan. While it’s a stand-alone mission, it feels like a deleted scene in the story of Mass Effect 3 in that it was removed but you lose nothing because of its removal (and gain nothing from its reintegration).

So while it’s a DLC that looks good and adds a bit of lore to the universe, it does so without really adding to the story of Mass Effect 3. Unfortunately, that means it isn’t really worth $10. It’s far better value for the money than the From Ashes DLC which was also $10. However, Lair of the Shadow Broker cost $10 far superior to Leviathan in every way. The closest comparable I can think of for the Leviathan DLC is ME2’s Arrival. It’s linear and is a story-based DLC with nothing really new in terms of gameplay. However, Arrival cost only $7. If Leviathan was $7, I could recommend it given what I noted above. Ten dollars, though, seems a bit steep if you ask me.

Mass Effect 3 Leviathan DLC was reviewed on PC but is also available for the Xbox 360 and PlayStation 3. Your impression of the game will change depending on platform played on, PC specs and how much the lore of Mass Effect is worth to you.