Another edition of the Electronic Entertainment Expo, also known as E3, has come and gone. While there was a lot of hype going into E3, I feel as though the buzz during and after E3 was a little muted in comparison to years past. That’s not to say that there were a few surprises and high points from this year’s week of E3 fun and frivolity. So let’s look back at the best and worst of E3 2016.

If memory serves, VR first made a little wave back in the early to mid 90s. I want to say there was a VR gimmick in Black Check (a movie I don’t remember fondly) and at an arcade in Mississauga. That experience made me think that the same was bound to happen now with the current wave of VR devices.

At the moment, many companies are going all-in on VR. Sony used E3 to push the PlayStation VR device. A number of titles were announced for PC on the Vive and Oculus. VR was a part of almost every press conference with the exception of Microsoft who say they want it on Project Scorpio (and EA whose VR stuff was at Sony’s briefing). Some of the games are going to be complete games, such as Resident Evil VII or Batman: Arkham VR, while you have other that will be smaller experiences like the Battlefront X-Wing VR Mission and Final Fantasy XV.

As the technology evolves and if it gets adopted by the mass audience, we could see a lot of E3 being dedicated to VR. If it’s treated as a proper gaming platform rather than a gimmick like everyone treated the Kinect, this could actually be really cool. Of course, it all depends on it being profitable.

Look, VR might be the next big thing but that doesn’t mean that everyone is going to be able to get on board with it. Sure, Sony is launching the PlayStation VR for $399 USD (plus about $100 for the necessary camera and controller parts if you want it all bundled together). That’s not a terrible price against the $600 Oculus or $800 Vive but that’s still more than the price of a new PS4.

Based solely on cost alone, virtual reality could be dead on arrival thanks to a vicious cycle. People won’t buy a VR device because the value isn’t there so developers won’t make games for such a tiny market segment so people won’t buy VR because there’s no value without the games and so on and so forth. With the likes of Oculus subsidizing game development, they might be able to push VR through the high-priced early adopter stage but they need that to happen fast. That’s especially true on PC where you need to drop a few hundred dollars on sufficient hardware power to run your $600+ device. I don’t see many people willing to drop $1,000 or more to be VR ready (including headset) before they start buying games.

I’m sure that if the industry perseveres, they can get VR to something resembling the masses. I don’t think that you’ll see attach rates above 30% on any platform (a reported attach rate for the Kinect) and even that would be optimistic based solely on the price. I could be very wrong but I’m not planning to save up for a VR device because I’d have to save up for a new graphics card (and maybe even a new CPU) first.

He’s back! Hideo Kojima basically said “f*ck Konami” when he walked on stage at Sony’s E3 press conference to introduce his new IP starring Norman Reedus. I think everyone was watching the end credits for Guillermo del Toro’s name as part of Death Stranding seeing as he was a core member of the PT/Silent Hills team along with Kojima and Reedus.

Sure, Death Stranding might be a terrible title. No, that trailer didn’t make a bit of sense. The thing is that you know that it probably won’t at first because it’s Kojima. The early footage of The Phantom Pain involved a flying, flaming whale but everyone really loved MGS5. Could leaving Kojima to his own devices be a bad thing without that creative direction? Maybe but the man’s good enough to earn all the rope he wants to hang himself with if that’s what he wants to do.

Also, I heard on Podquisition that there was a small “f*ck Konami” chant that went up in the crowd at that point of the press conference but that could have just been Geoff Keighley from the set of the YouTube Gaming live stream.

Sure, Microsoft officially announced their Project Scorpio version of the Xbox One and whipped out their giant terraflop on to the table for everyone to gawk at. The problem was that they announced the Xbox One S ahead of the Scorpio so it only had an effective lifespan of about 90 minutes before Microsoft put it out to pasture. It was a case of “I can get an Xbox One with a big harddrive or I can wait for the one with better graphics.” The only benefit to the One S is that Microsoft won’t let companies skip the One for the Scorpio so games will still come to the One S even if they won’t be as pretty.

Nintendo and Sony just skipped out on revealing their new consoles altogether. We know that they’re working on the NX and PS4K/Neo but they didn’t show off either console at E3. The Neo is believed to be coming out this fall while the NX is expected to release next March. They aren’t leaving a lot of time to get hype generated for these consoles. It’s especially curious for Nintendo because the new Legend of Zelda game will be on NX so why not show off the NX build of the game? As for Sony, there’s a quiet rumour that says they’re quickly trying to upgrade the Neo so that it’s not completely blown out of the water by the Scorpio but Eurogamer says that the Neo will be out this year so we’ll see what the final verdict on the Neo will be.

This year’s E3 seemed to indicate that no company is interested in selling consoles until next year. Neither the Neo nor the NX made an appearance at E3. Hell, Sony and Nintendo didn’t acknowledge the existence of their new consoles during their press conferences though Microsoft killing the One S after 90 minutes should have told them that they made the right move.

Ignoring the actual content of the PlayStation press conference (which was still pretty cool and I have high hopes for Horizon: Zero Dawn), the format Sony went with was the best of E3. It’s as if someone in the marketing department said “we have one hour so let’s just get all of our shit in.” And shit they did get in.

Sony dropped the lengthy introductions and pseudo-interview segments that made up large portions of the other press conferences. Instead, Sony brought Shawn Layden on-screen to do a couple of speaking parts and then played trailer after trailer and seldom taking a break. Gamers got what they want, even if these briefings are supposed to be for the press and investors who might want to know the information from the talking points. Let’s face it, E3 has evolved beyond that to being a mass marketing event. From that perspective, Sony did it absolutely right. I want to see how everyone answers next year and how Sony changes things up to answer that. 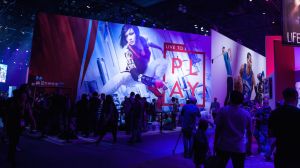 EA withdrew from the E3 show floor this year, opened up shop nearby with their own EA Play event and beat everyone to the punch with the first presentation of the year. They were doing everything different this year. Well, except for the games. We knew what they were showing ahead of time and didn’t bring any surprises or interesting footage with them. EA Mobile was forgotten about. Star Wars and Mass Effect got some generic behind the scenes talking bits with little new footage or info. They even disappointed people with Madden by debuting it in Britain where no one cares. Even Jose Maurinho didn’t get a reaction.

This was almost a complete failure of a conference from EA. Even if they’re making games people want to play, you should get people a little bit excited, right?

Trials of the Blood Dragon might have been pretty poor (our review is coming very soon) but The Boss’ new trademark bling was worn by one of the two developers on stage for the game’s reveal. I think it was the Ubi Montreal dev who wore the Legit Boss jewelry for his presentation. This shouldn’t surprise anyone but The Boss is f*cking over. The Fed should have put the strap on her at WrestleMania. At least they didn’t kill her heat when they pulled her off TV for the last two months. That pop in Brooklyn when she wins the title will be epic.

The whole Ubisoft presentation was opened by a dance number to Queen’s Don’t Stop Me Know for Just Dance 2017. I think that announcement and dance routine was very out of place against the rest of the presentation to core gamers, especially given the immediate condolences to all impacted by the Orlando nightclub shooting.

South Park: The Stick of Truth was a parody of classic turn-based and computer RPGs, LARPing and video games itself. Even if the game was dragged to the brink of development hell because of THQ’s bankruptcy and the game’s purchase by Ubisoft, it all turned out fairly well in the end.

For the second South Park game, South Park: The Fractured But Whole, they’ve taken a different approach with a superhero-themed game with more dynamic combat through the use of positioning and time manipulation in addition to turn-based combat. Add that to all of the usual South Park humour that translated so well in the last game and this is an early favourite for my Top 10 of 2016 list.

The only problem might be the developer. They’ve gone from Obsidian who have made KOTOR2, Fallout: New Vegas and Pillers of Eternity to Ubisoft San Francisco who have made Rocksmith, Tetris Ultimate and a Smurfs movie tie-in. Going from a pillar of the RPG industry to a studio so lacking in notoriety that they don’t have a Wikipedia page is just a little concerning.

Look! Here’s a game you can play with your friends! Have some gameplay footage where people who are clearly friends are playing together in organic, natural, unscripted gameplay!

I don’t know why anyone in marketing thinks it’s a good idea to script what people say when playing co-op games. The closest I’ve ever gotten to that with friends is “Can you switch to Reinhart so these dumb motherf*ckers consider going near the f*cking payload instead of standing around with their heads up their asses and ignoring the f*cking objective?!” Okay, that’s nothing close to the attempted dudebro scripted conversations that Ubisoft and Microsoft had during their press conferences but it’s generally what you hear when playing games with VOIP. It’s insulting to gamers’ intelligence to try to pass either of these gameplay videos off as a representation of real life. Just show the gameplay with a post-commentary so we know what’s happening and leave it at that.