E3 2016 Preview: What Franchises to Expect from EA

EA is changing things up with their approach to E3 in 2016. Not only will they not be on the show floor at the LA Convention Center but they’ve dropped their Monday afternoon press conference for a Sunday afternoon presser to make them the first company to make their E3 presentation. There will be a lot of pressure on them to put on a good show to start E3 off right. Fortunately for the twice Worst Company in the World, they have some big franchises with big sequels due for release this year.

As you would come to expect from EA, their releases will be staggered over both the holiday quarter (October to December) and the final quarter of their fiscal year (January to March). We know that there will be three major EA releases over that six-month window with Battlefield 1, Titanfall 2 and Mass Effect (Don’t Call It 4): Andromeda. Of those three, it’s believed that Battlefield and Titanfall will be fall releases while Mass Effect will drop in March.

I would expect large portions of time to be spent on each of these games with combinations of new trailers and gameplay footage shown for each of those three. I wouldn’t be too surprised to hear announcements of betas for either of the shooters and definitely an announcement that the games will be playable at the EA Play off-site event that EA is holding to coincide with E3. 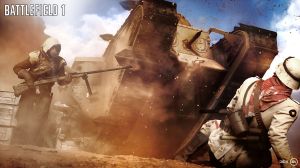 In terms of trailers or gameplay footage for EA’s big three releases, I would expect Titanfall 2’s section to mention that it’s going to PlayStation for the first time and that there will be a single-player story campaign for the first time as well. Expect Titan swords to be a big deal as well. We know that Mass Effect: Andromeda will be a mostly single-player focused game but I would expect to see a multiplayer teaser to go with a story trailer and maybe a look at some new aliens and worlds. The Battlefield 1 trailer is probably going to be a barely veiled series of potshots at COD and we’ll love DICE for it. We’ll also get the annual Battlefield multiplayer live demo.

So far, we’ve omitted the Star Wars games. As of writing, it doesn’t look like we’ll be getting a new Star Wars game this year. The best case for Star Wars fans is that there will be some unveiling or news for Battlefront 2, which is scheduled for release Fall 2017 in time for Episode VIII, or Visceral’s Star Wars project headed by Amy Hennig, which has a targeted release date of 2018. We’re expecting to see the release or the announcement of new DLC for Battlefront. I’ve read that we’re likely to see Cloud City DLC with Lando Calrissian as a playable character announced or launched at E3 with more info on the Death Star DLC possible.

There might be a small mobile component to the presser. The EA Play event, not to be confused with the keynote of the same name, will have playable demos of Madden NFL Mobile and Bejeweled Stars. I wouldn’t be surprised to see a little focus on the many EA mobile offerings, especially given how big the mobile space is.

And from EA Sports, expect the hype train to stop at E3 to tell you all sorts of interesting updates for FIFA 17, Madden 17 and NHL 17. Didn’t they have Rory McIlroy PGA Tour Golf at one point in time or have they given up on golf?

For surprise unveils or re-introductions, many are looking at a Mass Effect Trilogy remaster for the current generation of consoles. After the revisions to the mechanics in the Uncharted: Nathan Drake Collection, one wonders if they awful inventory system in Mass Effect 1 will be revised somehow in order to reduce the amount of time you spend on inventory management.

Criterion is currently working on an officially unannounced project but we did see a teaser at E3 2014 that included a lot more than just cars. The logical assumption is that it’s a new IP because it wouldn’t fit with the usual features of a Need For Speed or Burnout game.

There’s also Jade Raymond’s open-world action game that she is working on as the head of EA’s Motive Studios. We have heard almost nothing about the project apart from that it’s going to be an open-world, single player focused action game. The obvious inspiration is the Assassin’s Creed series which Raymond has worked on as part of Ubisoft. This might be the biggest long-shot surprise that EA could throw at us but it would certainly be interesting to see their take on the genre while Ubisoft goes back to the drawing board on Assassin’s Creed.

What I’d like to know is what EA will be holding back for reveals with Microsoft and/or Sony. There might be some tie-ins with the Xbox One II or PlayStation 4K that the console manufacturers will probably want to reveal on their stage rather than ahead of time. That also doesn’t include the general trailer reveals and content announcements that Sony and MS get for their keynotes on Monday.

One of the reported items that could be held off for the Sony press conference is reports of EA working on a VR version of Battlefront. With Microsoft working on the Oculus partnership and the close/special relationship between EA and Microsoft, there is a small chance that Battlefront VR could appear on Xbox One but the odds favour Sony given the imminent launch of Project Morpheus / PlayStation VR.