← Doctor Who Villains Through Time (Infographic)
Doctor Who: The Witch’s Familiar Review →

Life is Strange – Episode One Review: If I Could Turn Back Time

With the final episode of Life is Strange, Square Enix and Dontnod’s surprise hit episodic adventure game, coming out on October 20th, I think that’s as good an excuse as any to play through it and get it all reviewed between now and the release of that last episode. Critics adore this game and review scores are getting better with every episode. My interest comes in that I find that my reviews often contradict the critics in that where critics see improvement, I see it differently. Will I see a game floated as a game of the year contender differently that the rest?

Off the bat, I think I’ll mention that the developer of Life is Strange is Dontnod. You might remember them as the devs of Remember Me, a game I gave a 6.5/10 and still liked enough to name one of my favourite games of 2013. I actually thought that the story had the potential to be absolutely spectacular if moral issues and character development were explored more deeply. With the episodic format and less focus on action, on paper, it seems as though the episodic nature of Life is Strange will play to Dontnod strengths.

Life is Strange – Episode One: Chrysalis introduces us to Max Caufield, an 18-year-old student at a private high school that specializes in the arts. It just so happens that Max is a very, very good photographer so you’d think she’d fit right in. But this is high school so it’s all very cliquish and almost everyone except the jocks and the mean girls (like right out of the movie of the same name) are social outcasts to some degree. Max isn’t helped by the fact that she just recently moved back to Arcadia Bay from Seattle so she’s the new kid. Part of the game will be navigating the social world of high school so if you had a traumatic time in high school, I can’t imagine you’ll enjoy those parts of the game.

Life is Strange isn’t just a high school simulator, fortunately. (Though I’m frightened that I just gave someone an idea for a new game.) At the start of the game, Max wakes up from a nap in class during which she had a dream of Arcadia Bay about to be wiped off the map by a massive storm. It’s not exactly a better world that she wakes up to. Her’s is a world of petty high school bullies, missing girls, authority figures on the take, drugs, secret and not-so-secret surveillance, guns and violence.

Even that’s missing out on the big piece of this game. Life is Strange goes beyond just simple high school drama. Max finds out quite quickly that she has a superpower. If you’ve played Dontnod’s other effort, you might be familiar with the company’s fondness of the butterfly effect. That’s the concept of one small change in the past causing a big change in the future. They used it in the form of memory remixing in Remember Me.

In Life is Strange, Max can reverse time. This mechanic is implemented for a few different uses. You can rewind time to change a decision that you make. Reversing time allows you another chance to solve a puzzle. You can also change dialogue options selected or add new dialogue options after hearing what the other person says and adjusting your approach for the best reaction. Each of these concepts are introduced in the first hour of the game. Presumably, more uses of this mechanic will be introduced in future episodes.

As with other episodic games, your decisions and actions will have an effect in future installments. I suppose that’s a form of the Butterfly Effect. The impact of a decision is small now, presumably little differences in decisions will have a big effect as the episodes roll on. Not to spoil anything but I heard on a podcast that there is a 40-minute scene in one episode that could get completely cut from the game depending on the decisions you make. That’s consequence for decision that I don’t recall seeing from the Telltale games.

The bulk of the gameplay does seem very much like your standard point-and-click adventure game that we’ve come to know and sometimes love since Telltale Games had a breakout hit with The Walking Dead. The difference is that the actions or dialogue isn’t so much point-and-click as click-and-drag. It’s not necessarily the most intuitive way of making a selection but I don’t ever feel like I’ll select the wrong option. Okay, I don’t think that happened in TWD either but it seems as though that’s really not a possibility here.

While it’s easy to compare Life is Strange to Telltale’s assortment of similar games, I think there’s a big difference in the narrative around decisions. In Telltale games, you’re never really questioned about your decisions. No matter who you’re playing, unless you’re making a choice that’ll induce a game over state, you’re never really questioned about your choices. It always seems as though you’re making the right or best possible choice. Some of that might be helix story design that tends to bring the narrative to the same point regardless of what decisions you’ve made.

I don’t know if Life is Strange will use that same helix design. However, Max’s internal monologue always questions every major decision you make. It’s not that the decisions that you’re making are wrong or that they aren’t the best option. You won’t know that until the game plays out.

I think this approach is part character and part mechanical. The mechanical part comes from the fact that you can use the aforementioned rewind mechanic to reverse time to the decision point and change your decision should you choose. From that perspective, it’s just reminding you that you can rewind to alter your decision. From a character perspective, Max is just a teenager. It feels like it’s Max’s own teenage insecurities and uncertainties coming through in her monologue. Maybe I’m overthinking it but it feels like this fits with Max’s character. 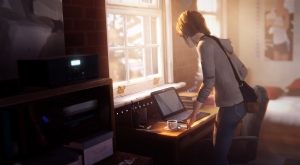 When writing reviews, I don’t feel like I really talk about the graphics very much. In this instance, I’m not sure anything I could write would do the graphics justice. It’s not done in a photorealistic style. It’s slightly cartoonish. Perhaps I should call it artistic given the central location of the story. The characters and environments have an almost handdrawn feel to them. Everything looks great and like it should without looking like a photorealistic environment. Well, the action prompts and text all look like handwriting you’d see in a teenager’s notebook which is very appropriate given the setting and characters.

The lighting is just about perfect. The play of light and shadows, the colouring of light through the time of day or going through curtains and the use of this to create moods is probably the best I’ve seen in a game. There are other little tricks they use like depth of field / aperture size / focus to give the scenes a cinematic feel. Maybe the best comparison would be to Absolute Drift. It’s graphics are minimalistic but it fits that game. Life is Strange has graphics that make sense for the universe. I feel as though if I took a screenshot and submitted it for marketing in my high school photography course, I’d get a damn good mark regardless of what I took a screenshot of. The graphics are just damn near perfect.

The audio, on the otherhand, could use some work. The voice acting of the main characters, especially Max and Chloe, was pretty good. I’m less sold on the acting of the secondary characters but that’s to be expected on a $20 game. The score was nice. It was a good fit to have art school students listening to some tolerable alt and indie music unlike the crap indie music they played on campus radio when I was at Western (I was a talk show host and sports commentator so I had no say in the matter).

The script could have used some editing by someone who spoke English as a first language and knew what social media kids are using now. There were a scattered assortment of oddly structured sentences in the dialogue and some subject/verb disagreement. It wasn’t quite Google Translate levels of nonsense but it definitely sounds like it was written by someone who speaks a Latin-based European language as a first language doing the translation with their limited English as a second language experience. It just comes off as very low budget. You’d think Square Enix has a translator or two to spare but apparently not. 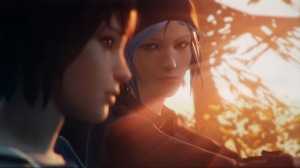 I guess the one thing I didn’t really talk about in this whole review is how the game itself played out. It’s the first episode to a new IP so it’s really about setting all the pieces for the episodes to come. Unlike the Telltale series we’ve played, there are no pre-existing characters or universe to leverage in starting the story. As a result, Life is Strange: Episode 1 spends most of its time establishing who the characters are and Max’s relationship with them.

By the time that Max’s BFF is introduced, we start to connect with Max because this starts to make her a real person rather than a quirky loner arts kid in a stereotypical high school dramedy. It starts to flesh out her history and give her character some added dimensions. It’s more reactive to your friend than pro-actively doing things that affect people’s lives. I feel this relates to my life more than most games.

While it’s a beautiful game with all the potential in the world depending on where the writers take the story, games aren’t rated on potential. That’s the old Dontnod downfall I mentioned in the Remember Me review. Episode One is really just a starter for the five-course meal that is Life is Strange. You’re not going to peak at the start (at least, I hope not) but it’s a good little taste of what might come.

Life is Strange – Episode One: Chrysalis was reviewed on PC but is also available for PlayStation 4, Xbox One, PlayStation 3 and Xbox 360. Your impressions of the game may differ depending on platform played on, PC specs and how much you absolutely hated high school and all the people there.

← Doctor Who Villains Through Time (Infographic)
Doctor Who: The Witch’s Familiar Review →