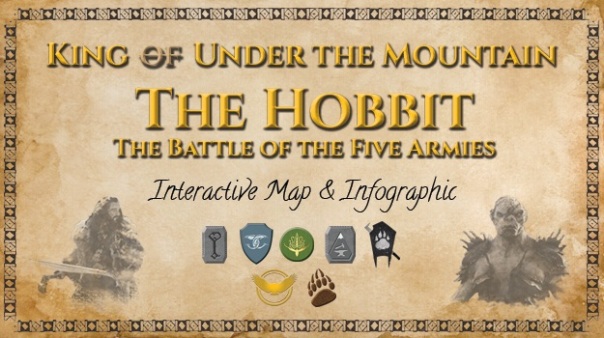 A six-movie saga that has spanned thirteen years in cinemas and 77 years since The Hobbit was first published is coming to an end this weekend. Yesterday was the North American release date for The Hobbit: The Battle of the Five Armies, the last movie in Peter Jackson’s Lord of the Rings and The Hobbit dual trilogy.

To celebrate the premiere of The Hobbit: The Battle of the Five Armies, we have not only a handy infographic with a look at the titular five armies but also an interactive flash graphic with the armies and a map.

By the way, SPOILERS! So many spoilers! Well, I suppose it’s a spoiler if you haven’t read the book.

First, let’s start with the interactive component of our show.

And here’s that same info as your standard infographic which might be helpful since that flash graphic might render a little small for you.

Posted on December 18, 2014, in TV/Movies and tagged Infographic, The Hobbit, The Hobbit: The Battle of the Five Armies. Bookmark the permalink. Leave a comment.