While I did a lot of sports gaming in my teenage years (who didn’t?), one sports I’ve never really been into is basketball games. That’s not to say that I haven’t watched basketball. I did see the Malice at the Palace on local TV. I know enough to have called a few basketball games (including a provincial championship) for radio in university. Most importantly, basketball was by a Canadian so it’s really in my blood.  So it’s not like I don’t understand basketball.

That preamble doesn’t mean that I understand this basketball video game. Unlike the NBA Lives and NBA 2Ks that I’ve played in the past, Basketball Pro Management 2015 doesn’t put you on the court. Similar to the Football Manager series, Basketball Pro Management takes you off the court and onto the sideline and in the front office of a basketball franchise. I’ve played games close to BPM15 and enjoyed them but close only counts in horseshoes and hand grenades.

The funny thing about this review is that it very nearly ended up being completely different. No, I didn’t mistake a different game for this. Before the first patch (which came out five days after release), Basketball Pro Management 2015 was literally unplayable.

The game started me at July 1st but with nothing to do until the games start, I just simmed though a week at a time. That was until I hit August 1st and the game decided to not progress me beyond that. The first time I played, I let it go 45 minutes before forcing it to close. I tried again running only one league in the game but I had the same problem and gave up after a ten-minute wait. 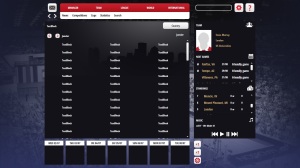 When I say this game was a legitimate, unplayable 0.0/10 pre-patch, I mean it. For the week I had it for review and half-a-week beyond release, there was no game to be played. It’s been patched three times since release (twice while I was working on this) and actually works but that was about as bad a first impression that a game can make. Oh, and pre-patch, my Avira anti-virus though that this game was a Trojan. What a start.

Now you’re probably wondering what the moral of the story is. The first is buyer beware. As we’ve learned these last few months, it’s not just the little studios who are putting out games at launch that are in desperate need of patching. Even the triple-As are leaning heavily on patches as a crutch. This is why we have reviews, reviewers and review copies of games..

The second is that while this is very much a technically and technologically imperfect game, for something that initially appeared to be paid abandonware, developers Umix Studios are willing to put in the work to make this game work. It’s funny that Ubisoft is throwing millions of dollars at a broken game and seemingly reluctant to get it up to par but little Umix and Cyanide are doing it too on a comparatively microscopic budget. They might not have gotten it right at first but fair play to them for trying to amend it afterwards.

Having had time with other basketball and sports management simulator games is probably the worst experience to have going into this because BPM15 does not stand up well to any other game in similar genres.

The problems are apparent off the bat. The game quite obviously was not professionally translated and then given a once over by a native English speaker. I found some of the original French in a couple of screens (which isn’t a problem when you retain some knowledge of high school French) but a lot of the English translations have awkward word choice or phrasing. You can sort of guess at what is being said but you don’t know for a fact what they’re asking for until you click. 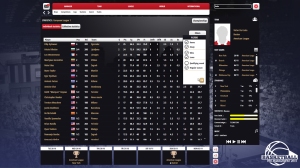 Speaking of budget cutting, it doesn’t appear that anything was licensed. Spending time in the NBA and NCAA Division I- I mean, American League and US Universities ranks shows a lack of licensing for team names (everyone is referred to by city except for the two LA teams that are now Hollywood [the Lakers] and Lob Angeles [which is actually a fantastic play on the Clippers’ Lob City nickname]) and player names. Go Google LeBron Jamas. Did I mean LeBron James? Not if I want to find him in this game. Everyone has one letter changed in their last names for the sake of legality.

And that’s where the front office starts coming off the rails. Finding players is very difficult because you can’t search for players by their real names. There’s supposed to be a customizable database editor but I can’t figure out how to do that and there isn’t enough time in the day to do it myself. Sure, someone posted a file to do that on the game’s Steam forums but I’m not going to be the first to try it. If it was through the Steam Workshop, maybe I would but not from some random file-sharing website. Yes, I have a bit of a trust complex.

Exacerbating that problem is that scouting in this game is poor at best. You can’t set criteria for scouting like in the FM series so you can only scout individual players. Finding free agents becomes difficult as you have to play around with the global player search filters to come up with a list of out of contract players from America because you can’t reliably filter by overall skill to determine if they’re NBA calibre or if they’ve ever played or considered playing in the NBA. 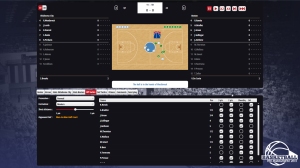 Once you get into actually playing the games, things get better. Sure, I have no idea how to design a play but you can choose quick plays (pick a player and how they’re going to score between driving the lane, backing into the paint, a shot from the field or from beyond the arc) while in the game. You can also control player tendencies on offence and defence to help that too. It’s not as in-depth as getting your players in a row as FM but it’s a damn sight better than everything outside of a game.

To the game’s benefit, it seems as though what you do makes a difference. If you sit back and let things play out without intervention, chances are that you’ll lose. I dozed off in the middle of a game in which my team was up by ten at one point before waking up to being up 2 to waking up again and losing by five. When I was down five, I saw that the opposition was running a 3-2 zone to shut down our outside shooting that ran up the lead while exploiting my man-to-man with picks and outside shots. So the AI doesn’t do too bad a job of keeping you honest.

And unlike the non-game gameplay, the user interface in games is actually pretty easy and intuitive to use. Sure, calling timeouts could be a little better and it would be nice if you could do individual player talks and shouts from the sideline rather than just team talks between quarters and in timeouts. Granted, yelling from the touchline was just added to FM this year but that doesn’t mean that BPM16 shouldn’t have it. And there should be a chance to sub players during quarter ends and timeouts. Currently, you must have your subs set prior to one of those so I’m always having to set my next rotation with ten seconds to go in a quarter. 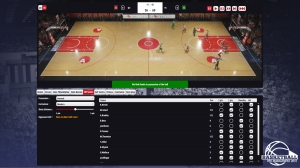 The one part of the graphics that is painfully bad is the 3D game view. It’s like if classic construction paper stop-motion animated South Park was turned into a basketball video game. Critics bang on about the animation in FM2015’s 3D engine but you could find an Intellivision basketball game with better animation than BPM15. After watching a player vibrate to show he was committing a foul, I gave up on that and went back to the little circles on the overhead drawing. It gave me a better idea of what was happening than the 3D engine. And I think I’m being kind in describing the in-game 3D this way.

The sound isn’t much better. The soundtrack isn’t too bad. I turned it off before too long because you can only sit on those pre-patch endless loading screens listening to the music before wanting to go deaf. I suppose I could have hit mute. But the in-game crowd sounds are pretty poor. The first quarter has some mild crowd sounds and then the crowd dies until the fourth when they start cheering again. In between, you get some quiet random looping shoe squeaking sound effects with the occasional whistle. Not much to write home about there.

There are a few more missing pieces from the game. A better scouting system would be a massive plus. It would be nice if scouts or teams had their own pre-formed reputations of players before you scout or try to sign them. It’s just not realistic to see a bunch of names and have no idea how good they are or could be. Also, tool tips or actually useful hints during loading screens would go a long way to making the game even slightly welcoming for newcomers to the series, such as myself. And a little work on the 3D graphics, sounds and translations wouldn’t hurt the overall impressions the game makes. 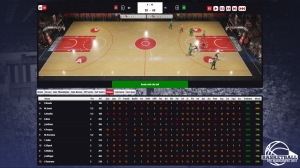 It’s an interesting dichotomy between the in-game and let’s call it in-office portions of BPM15. I’m not much of a basketball guy but I thought that actual basketball parts of the game were far and away the best part of this game. If it was something like Basketball Pro Coach 2015, this game would actually be infinitely better as a result.

The problem is that it’s a management simulator, not a coaching simulator. I just haven’t found much to do with the management part of the game and what little I try to do, the game is fighting me from doing that. Maybe when I get to the end of the season and contracts expire, I can get frustrated by the scouting system all over again. But I don’t want to spend tens of hours to drive myself into further frustration just to see if a system works better post-season than the non-existent functioning during pre-season.

So how much you love Basketball Pro Management 2015 is going to come down whether you want to spend your time as a coach or a manager. If it’s manager, well, good luck. If you want to be a coach, you’re going to have a better time of it. The problem is that the game is trying to be both and has to be scored accordingly.

Basketball Pro Management 2015 was reviewed on PC (Windows). The review code for this game was provided by Cyanide Studio. Your impressions of the game may differ depending on platform PC specs, how many patches that you download and whether your ambition is to be a manager rather than coach.