Game of Thrones: The Laws of God and Men Review 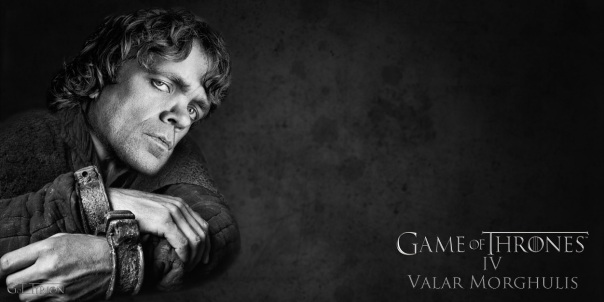 How it played out was absolutely amazingly with some Emmy-worthy performances… And with a shirtless Ramsay Snow taking care of business in the Dreadfort.

Spoiler Alert: This episode will be spoiled. Discussion of the first two books and preceding 35 episodes is fair game in the comments because that’s how far in I am. Speculation based on the show is allowed. Spoiling the plot of upcoming episodes based on the books… May the gods punish the commenters.

Once again, the theme of the episode was fighting with honour. It’s not just reserved for battles with a sword as Tywin and Cersei Lannister demonstrated this week.

The Trial of Tyrion Lannister, also known as The Imp, the former Hand of the King and now the second Kingslayer of the House Lannister, is another instance of fighting without honour. While we know what the story is, we have the advantage of the third-person limited narrative style of Game of Thrones. Even if Tywin and Cersei knew the whole story, how many Golden Dragons would you bet that they’d rather see Tyrion hang than seek the truth.

That was in plain sight for all to see. Jaime outright called the trial a farce to his father’s face. Prince Oberyn didn’t seem particularly interested by the end as he seemed to know how the story was written to end. Everyone was just playing their roles knowing that the outcome was determined when the accusation was made. Well, everyone except Mace Tyrell who doesn’t seem bright enough to realize the game that was being played.

Bringing back Shae was the real knife for the audience. Even as audience members, we were following this to the inevitable conclusion (presumably getting infuriated at everyone turning their back on Tyrion) but this was the real heartbreaker. It shouldn’t be surprising that Shae came back because hell hath no fury and all that. It just made it all that much more personal.

The interesting follow-up to this story will be who brought Shae back. Cersei knew of Shae’s presence and their lover’s quarrel. She could have brought Shae back. Pod and Bronn are the only two others who would have known and Pod isn’t in King’s Landing. I know Bronn said he couldn’t be trusted because he’s a sellsword but surely he wouldn’t… Then again, how many times have I said that over the last three and a half seasons.

By the way, did anyone else notice that Shae’s testimony contradicted Grand Maester Pycelle? Pycelle said that the poison was confiscated and horded by Tyrion while Shae said Tyrion acquired the poison after the Red Wedding when the plan was allegedly hatched. An unbiased adjudicator would pick up on that. Well, not that Tywin is at all unbiased.

Whether you were interested or pissed off or whatever you felt about the trial, it’s was an acting tour de force for Charles Dance and Peter Dinklage. It might be just me but it seem that acting across from Dance seems to elevate everyone’s game. How many great scenes this season have featured Tywin Lannister in conversation with someone else? A combination of dialogue and acting make those scenes spectacular but it can’t be a coincidence that Dance is in so many great scenes. If the Emmys gave an Most Valuable Actor award, Dance has it in the bag.

However, it was Dinklage who stole the show. Great little moments of bemusement during the trial gave way to a complete mental breakdown as we watched the exact moment that his heart broke in front of the King’s Landing elite. The burn the world speech that Dinklage delivered at the end of the episode was probably one of the greatest moments in the show’s history. It’ll probably go down as the single best acting moment this year and the Emmy should already be engraved with his name unless Emmy voters go hipster or rigged for money. You really have to track this down on YouTube.

And why do I think that Tywin will go “Fool me once, shame on you. Fool me twice, shame on me.” and prevent Tyrion from trying anything particularly tricky in his trial by combat. We already saw Tyrion escape the Eyrie thanks to a timely hand from Bronn. Maybe Bronn will be back to help. Maybe it will be Jaime. Perhaps it will be someone else. But if Tywin just wants Tyrion dead (and he does), forcing Tyrion into single combat for his own life will take care of that quite quickly.

For me, this may not have been my favourite part of the episode. A shirtless and cut up Ramsay Snow going on a rampage against the invading Iron born, including Yara Greyjoy, was pretty damn cool. Iwan Rheon plays the psychotic Ramsay Snow so amazingly well that I can’t root against him. It’s not like he’s done anything to any of our heroes. Roose Bolton did but not Ramsay. And actors love playing villains and Rheon looks like he’s having the time of his life.

For all the talk we’re doing about The Dinklage this week, Alfie Allen continues his impressive streak of incredible performances as the broken Reek. It’s not just the meek recoiling from Yara and the rest but the way he’s so completely terrified of everyone and everything after what Ramsay has done to Theon. I do wonder if the screen test for Theon was doing a Reek scene or the producers just hoped that their choice for Theon could reach down deep for a perfect Reek performance.

Peter Dinklage will pick up the hardware for his performance in this episode but Allen will end up being the rising star coming out of this series. Talent like that just can’t be kept down forever.

Meanwhile, the one true king of Westeros was back this week. With the amount of money thrown at Stannis’ scenes this week, I’d imagine that he’s got to start playing a big role soon. That CGI intro to Bravos and big Iron Bank set scream money. If a goat-eating dragon didn’t show up this week, I’d guess most of the money was spent on the Mannis this week.

I don’t see why people are bored of him. He’s that politician that hits all the right buttons from a technical perspective but just doesn’t click with you. His claim is just. He’s the smartest man in the room. Compared to the competition, he’s the best with a sword. He’s the best choice for the Seven Kingdoms even if we all don’t think he’s the right choice.

The more charismatic and hard luck Ser Davos Seaworth is certainly worthy of more love and who doesn’t want to see more Davos. For all the crap that Stannis throws his way, Davos really is the best friend that Stannis could ever ask for. Getting the heads of the Iron Bank to change their mind on Stannis’ request for a loan was nothing short of a masterful speech and a masterful coup.

And while Liam Cunningham didn’t have a great episode of Doctor Who written by Mark Gatiss, he at least got a great speech opposite Gatiss. Davos might not be book smart or literate but he sure is one of the more life smart men in Westeros. And now we know how old Tywin Lannister is. He’s almost as likely to die of old age as he is to meet a fate that fans would want to see.

You know, this episode was structured quite similarly to The Lion and The Rose. We have scenes around Westeros and beyond it to start the episode before we spend the back half of the episode in King’s Landing where the real story is. That episode also had rare appearances from Stannis and Ramsay Snow, both of which are welcome.

While the surprise of the conclusion of The Lion and The Rose will make it the most memorable episode of this season, it’s this episode that’s the far better written and acted. I felt The Laws of God and Men got more out of me emotionally than even killing Joffrey did. It’s no surprise that more people are tuning into Game of Thrones now than any other show on cable.

Next week’s episode is called Mockingbird. We get more with Tyrion at the trial as an unlikely ally steps to his aid. So who besides Jaime is interested in Tyrion’s well-being. I wonder if Maggie Tyrell’s conscience does get the better of her and the Tyrell kids (Maggie and Loras) try to help. The Night’s Watch think Jon Snow KNOWS NOTHING when it comes to preparing Castle Black for battle with the Wildlings. And in #TrueDetectiveSeason2 watch, Brienne and Pod follow a new lead in their hunt for Sansa.