Game of Thrones: The Breaker of Chains Review

After everything changed (again) in last week’s episode, this week’s episode of Game of Thrones was a bit more of the standard fare as we bounced from story to story. However, unless you were in the North or across the Narrow Sea, you were still talking about last week’s events. Even the internet was talking about it for the last week and the Seven Kingdoms aren’t even wired in.

Spoiler Alert: As always, this episode and all the prior episodes are fair for discussion. And I go straight into spoilers this week so don’t read past this point if you haven’t watched this week’s episode. A Storm of Swords or other future book plot points not covered in the show are off-limits. The first two books are fair game.

The opening scenes in King’s Landing were some of the most interesting and compelling ones of the series. The Season Four debut of Littlefinger was unexpected seeing as, until he showed up during this episode, I forgot that we hadn’t seen him yet this season. I spent last week looking at Varys or the Tyrells but I discounted Littlefinger because he wasn’t there. Who would blame a man who wasn’t even there?

So it was Littlefinger who used Dontos and Sansa to get the poison to the wedding but we still don’t actually know how it ended up in Joffrey’s wine. Sansa didn’t know about it. Tyrion didn’t know because he wouldn’t be foolish enough to poison the King while standing next to him. There was an inside man working for Littlefinger. The question still remains who actually poisoned the King. I wonder if we’ll find out who it was before Littlefinger silences them.

If you recall, Varys once said that Littlefinger “would see this country burn if he could be king of the ashes.” This is a good start. I do wonder what his play from here is, though. I don’t see how Joffrey’s death benefits him in any way. Whisking Sansa away makes sense if he’s trying to secure lordship of the North, even if the Starks’ dominion over the North is non-existent at this point in time. I always sort of figured that his interest in Sansa had more to do with his unrequited love of Cat. He always seemed like a little bit of a creeper by basically wanting to trade in Cat for a younger version of her.

By the way, did something seem off about Littlefinger’s voice? I want to say that he was going almost cartoonish villain with his delivery last night. I guess someone told Aiden Gillen that even though you killed the King and should be the hero of everyone watching, we still aren’t supposed to trust you so make that work. Even if the delivery was a little over-the-top, I’d say that it was mission accomplished.

Meanwhile, in King’s Landing, Tyrion is locked in the dungeons after being accused of killing Joffrey. Only in King’s Landing would he be imprisoned for that. Literally anywhere else in the Seven Kingdoms (except maybe Casterly Rock and Harrenhal), he would be a hero. Actually, even at Lannister strongholds because Tywin didn’t seem to be heartbroken that Joffrey was dead. The man is interested in power and that was the one thing he didn’t have over Joffrey and, in turn, the Seven Kingdoms.

The Tyrion scene with Pod was great because it hearkened back to Ned Stark’s time in the dungeons. Like Ned, Tyrion is more concerned with everyone else’s well-being than his own. He doesn’t want anyone else to lose their heads on his account. Granted, neither did anything deserving of being executed but justice is a foreign concept in King’s Landing. It was a touching scene when Tyrion is trying to get his friends out of harm’s way, even if it meant putting his neck under the sword as a result. 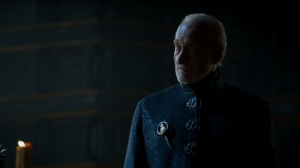 Speaking of Tywin, Charles Dance got to be a boss again this week. While Cersei and the new King Tommen stood over Joffrey in the Great Sept of Baelor, Tywin got a great scene in which he explained what made a great king to Tommen. It was just an absolute tour de force. You know Tywin is evil but you also know that everything he’s saying is true. Even if his using this speech to manipulate Tommen and bring him into line as a puppet, you know that he’s right. Or maybe it’s that he’s so quietly charismatic that you think he’s right.

At the very least, we can all agree with Tywin that Joffrey was not a good King. Would anyone put it past Tywin to be part of the master plan to kill Joffrey to solidify his control of the Seven Kingdoms. He certainly couldn’t do that with Joffrey in charge because he couldn’t be trusted to listen… Or do anything wise.

And speaking of wise, it’s not wise to have sex with your sister in a church, next to the still warm dead body of your son with a bunch of priests just outside the door. Remember when we still kind of liked Jaime? Oh right, that was about a minute before he forced himself on Cersei by sticking up for Tyrion. I still think he’ll stick up for his little brother but men tend not to think with their big head.

One of the advantages of taking an extra day to do the review is being able to gauge reaction to the episode and a lot of people really didn’t like that scene. I don’t think those are folks who watched Season One. Drogo raped Dany for a while before she started using sex to control him (in a way). There’s a reason that this show in on HBO. Rape and incest and sex are touchy topics in Western society and I don’t think the show would be anywhere near as good if these had to be censored out to work on AMC, for example.

Personally, I don’t have an issue with this particular scene. I don’t see it as offensive (though I’m very hard to offend) or a glorification of rape or overly violent. It’s something that has been depicted and discussed on this show before. I won’t stop you from being offended by the depiction of rape and incest in this show but I’d rather you didn’t tell me or anyone else how they have to feel about it.

Anyway, I think I figured out the Stannis scene from last week. It’s not just to remind us he’s still there and is still the rightful true king of Westeros. It’s to remind us that he’s still a threat. He’s a very dangerous man who will stop at nothing to claim the Iron Throne. Poor Ser Davos appears to be in Stannis’ way right now even though he’s the only sane one left in Dragonstone. It’s funny that we hear Tywin telling Tommen the importance of heeding the advice of his Small Council (granted, for his own gain) while Stannis ignores the advice of his. Like his brother, Stannis might be a strong king but may not make for a wise one.

Meanwhile in Essos, nothing new is happening with Dany. I’m at the point of wondering if they ran through all the Dany chapters in the last season and are just filling in the gaps between Season 3 and A Feast For Crows. She’s just in the holding pattern of flirting with Daario and freeing slaves.

This week’s episode preview included a line about Dany having to choose a champion. It was so blindingly obvious what was going to happen that they could have omitted this scene and nothing would have changed. They didn’t even humour us by having Ser Jorah do the jealous thing. Daario acts suave, kills a dude and makes flirty eyes at Dany. That’s nothing new. It’s just giving us scenes with Dany because Emilia Clarke is one of the top-billed stars of the show. There’s no other purpose than that.

Also, Dany’s champion should have been Ser Barristan. He’s legitimately the most bad ass person in Essos. He could have dropped Meereen’s champion with nothing but a stern look. It’s too bad the show didn’t build him up in the same way as the books. If memory serves, in A Game of Thrones, he cut his way out of King’s Landing and no one could touch him. That does more for a character than giving the King a stern talking to on his way out of town.

Overall, this week’s episode was a bit more of a status quo episode for Game of Thrones. We got around to everyone’s story this week. While most of the episode revolved around, directly or indirectly, Joffrey’s poisoning, it does seem a bit scattered in focus at times.

But when you have so many characters and so many stories, you have to come up with a way to get everyone involved and keep the viewers’ attention. I suppose this is the smartest way considering that you don’t want to focus on one story an episode because viewers will drop out if they’re not invested. I don’t think I could do a Theon or Bran-only episode. Heck, I don’t think I could sit through an hour of just Dany freeing slaves. Give me an hour of important moments across Westeros and Essos and I’ll keep my eyes on the show. It’s just the scale of the show that makes the standard TV jumping between plots a little jarring because the stories are often so very isolated from each other.

Other points of note:

Next week’s episode is called “Oathkeeper” but I’m not entirely sure what it’s referring to. Dany’s story in Meereen continues. Bran and company continue their journey north to find that talking tree that Bran had a vision of. Jon looks for help to silence that potential information leak north of The Wall. And Jaime and Brienne get some time together after Jaime and Cersei had their time together this week. It’s either Jaime and Brienne or Jon that the title is referring to. I guess it’ll make sense next week.