The great danger of having an annual franchise, and especially one where licensing fees eat up a significant portion of the budget, is that the developer and publisher will pump out a new game every year that features only minor tweaks over the previous year’s effort.

While Big Ben Interactive and Milestone’s WRC series isn’t the biggest or prettiest racing game on the market, you can’t argue that they’re willing to change the formula every year.

As you’d expect, WRC 4 is a licensed simulation game for the 2013 FIA World Rally Championship. Unlike some of the other licensed racing games on the market, the WRC series doesn’t just cover the premiere class but the feeder series (WRC-2, WRC-3 and Junior WRC) are also included.

Last year’s WRC game seemed to take a lot of inspiration from Codemasters’ Dirt 3 in that it wasn’t emphasizing the championship but a series of progressively more difficult skill-based mini-games that weren’t rallies. 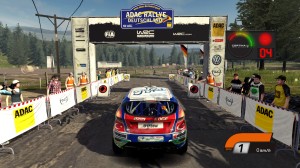 This year, the inspiration appears to be Codemasters’ F1 series (also a licensed game for a major FIA world championship). There’s more focus on rally events than skill-based challenges. The events are introduced with a voiceover about the rally’s history and general conditions. The music tends to remind me of a bit of a militaristic march. In other word, they’ve gone to the polar opposite of WRC 3 and that’s absolutely a good thing.

In the career mode, your goal is to start in JWRC (the bottom rung of the WRC ladder) and build up to competing for the WRC title after building up you reputation by faring well in the feeder series, meeting team objectives for you in those rallies and beating specified rival drivers in those rallies. It takes a lot from the career and season challenge modes from recent F1 games.

In addition to the career mode, you have the standard single stage, single rally and championship season modes available. There’s a new Quick Stage game mode which is a welcome addition. The game randomly selects a special stage and car for you to run in which I think beats picking a rally, then stage and then car from the Single Stage menu which is in the Rally menu. One button to go versus several more. Efficiency can be a good thing.

One thing to watch out for before you hit quick stage: Check the difficulty setting in the options menu. It defaults to one out of ten. In my first stage in WRC 4, I was pulling leads of over 5 seconds at each of the timing intervals and won by 30 seconds. Crank that sucker up before you do anything lest you think that the game is broken. 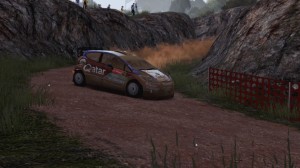 While last year’s game had an improved graphics engine, WRC 4 saw the team at Big Ben Interactive work on the physics. The problem is that they didn’t quite get it right. The driving is far better than in the previous year. The car feels like it’s digging into the road and is very easy to wheel around with the right setup once you get used to it. Each of the four classes drive differently and there’s a learning curve. I ran a few WRC-3 class stages in my career mode before getting dropped in a proper WRC VW in Quick Stage only to be holding on for dear life as the car launched off the line thanks to the massive power-to-weight ratio difference and drifted gracefully through the turns due to the 4WD compared to the front-wheel drive of the WRC-3 Citroen.

Unfortunately, the wonderful work done in the driving was almost completely undone by the collision and damage modelling. It’s just brutally inconsistent. I’ve crashed into barriers, flipped the car after clipping rocks (which happens far too often and far too spectacularly to maintain any sense of realism of the crashing physics) and nosed into trees and done no damage to the car. If you sideswipe a hard object or hit a small, one-foot-tall timing line sign, you’re definitely going to do serious damage. Sideswipe a barricade at 30 km/h, that’ll require you to replace the front wheel and suspension. Hit a rock and barrel roll ten times before coming to a rest, minor bodywork damage. How does that make any sense? 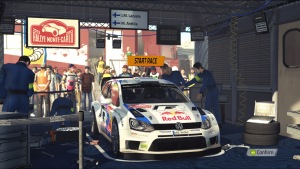 Another change this year that doesn’t sit well with me is the change to the service park. No, I don’t mind that you only get service (which includes car repairs and setup changes) after every day of the rally. I asked for that change to be made in my review of WRC 3. No, my problem is that they reduced the complexity of the repair menu. Now you just repair the whole part of the car with damage (such as engine, turbo, suspension, body work) rather than the individual components (like fix oil leak, top up radiator fluid, replace left-front shock, replace tail lights). I liked the old system because it was more realistic and put more on you as the game to set priorities. Repairing body work now, for example, is 25 minutes of your 60 minute service time whether you’ve got a slight ding or need to replace all the body panels and glass.

While I’m banging on about realism, I’m going to have to talk about rally stages again. I’ve done this the last two years and the speech hasn’t changed. Here’s last year’s rant updated to reflect this year’s game and WRC season:

Like last year, all the 13 WRC rallies are represented. Unfortunately, all the rallies are significantly shorter than their real-life counterparts. While a WRC rally is over 300 km of special stages and at least 14 stages (with most over 20 stages), a WRC 4 rally is only six stages long and no where close to 300 km.

While I can appreciate the that not everyone would be willing to grind through a 300 km rally, other racing games, like F1 and NASCAR games, have scaling options. If you don’t want to run 20 stages per rally, run a rally at 25% of the total stages. I’m not even asking for stages that are 10+ minutes long like most rally stages or recreations of actual rally stages. It’s just odd that a simulation of the 2013 World Rally Championship doesn’t rally push the endurance of players like their F1 and NASCAR equivalents do.

This wouldn’t be so bad if there was a pool of stages for each rally but it’s the same six stages every time you run an event. And each of those six stages sort of branch off each other. The special stages connect to each other with three or four branches that interconnect. The different stages are made up of a combination of a couple of those branches. Basically, if we ever saw an overhead map of all the roads of a given WRC 4 rally, they’d likely look like a big X or Y. If there were automatically generated stages or a rally was six stages long from a pool of 10 for a given rally, that would certainly improve the long-term playability of the game. 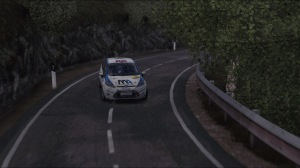 As for the graphics… Well, Big Ben Interactive has this thing where they went from full colour saturation in WRC to more of a muted, TV style, washed-out saturation in WRC 2 and back to full saturation in WRC 3. For WRC 4, we’re back to washed out. The washout sure makes the two snow rallies (Monte Carlo and Sweden) difficult since the road and snowbanks can be hard to tell apart.

Apart from the colourization, nothing really changed in the graphics. Sure, the car models look fine but the road and environment textures are nothing to write home about. The graphics are passable but nowhere near what the likes of the F1 and Dirt series are doing on PC and the Gran Turismo and Forza franchises are putting out on console.

To make matters worse, the PC port of this game hasn’t really been optimized. The graphics options at your disposal are resolution, v-sync and anti-aliasing and these are all available from a launch screen menu rather than in-game. Even with setting turned down, my laptop chugs along, especially in the service park where they have mechanics standing around. There isn’t much in the way of graphics options with only resolution, v-sync and FSAA. And don’t turn on the v-sync. I tried that with my desktop (only a 60 Hz monitor which I’ve mentioned before) and ended up tanking the framerate. I’m not sure what Big Ben Interactive did with the v-sync but I’d hazard that my framerate would drop well below 30 FPS. I’d rather the screen tearing than the chugging framerate. But the long and short of it is that this is a poor PC port.

Where effort was put in was the audio. The muted race car audio of previous years had been a point of contention I had with the series. Flooring the throttle for the first time unleashed a throaty, loud and simultaneously ear-piercing roar from the engine as it quickly found its way to the red line. The car audio isn’t perfect but it’s a significant improvement over prior years. Similarly, dropping the dubstep and electronic soundtrack for a proper, if militaristic, score gives the game more of a simulation feel than previous editions. 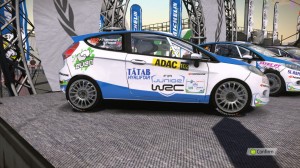 The folks at Big Ben Interactive have this nasty habit of two steps forward and one step back. On the plus side, the driving is better, the audio is better, and they dropped the ridiculous “Road to Glory” mode for a real career mode. That’s balanced with a bad collision/damage model, a lack of rally realism, slightly worse graphics than the previous edition and a poorly optimized PC port.

Every year, I come back to the WRC series hoping that they’ve finally put together the last piece of the puzzle that gets the game into the same league as Dirt or F1. The problem is that they make so many changes that they get something wrong that undoes all the other good work. Reintroducing the proper career mode was undone by botching the damage modelling and PC port optimization.

At the end of the day, as I’m reviewing the game on PC, I have to rate it based on the PC port they released to market. Unfortunately, it may be the worst of the four WRC games I’ve played. Even if the driving and the career mode is better than last year’s, there’s enough that’s gone wrong otherwise that I can’t give WRC 4 a better score than WRC 3.

WRC 4 FIA World Rally Championship was reviewed on Windows PC but is also available PlayStation 3, PlayStation Vita and Xbox 360. The copy of the game reviewed is a retail release provided by Milestone. Your impressions of the game may differ based on the console played on, PC specs, and bugs and glitches encountered.