← Bitcoin Transactions are Taxable in Canada
Comic Book Pull List for May 1, 2013 → 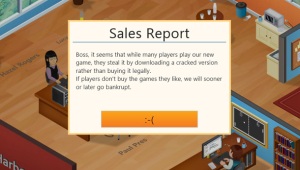 Did you get a pirated copy of Greenheart Games’ new Game Dev Tycoon game? Struggling massively to make money in your simulation? That’s not bad game design or even a bad crack. That’s something that Greenheart did to teach game pirates a lesson.

In order to actively teach pirates a lesson about the effects of piracy, Greenheart Games’ devs Patrick and Daniel Klug uploaded their own pirated copy of the game to file-sharing sites. Unbeknownst to pirates, this copy of the game was a little different from the proper retail release.

That’s because Greenheart added a couple of lines of new code to the game to make it unwinnable for pirates. This copy of the game includes extra code that cause pirated gamers to see their development efforts end in bankruptcy and failure.

That’s certainly an ironic way of dealing with piracy. While we’re used to games being DRMed to death, it’s not often that a developer makes a sort of overture to pirates. Greenheart has given pirates a taste of the game while simultaneously trying to illustrate the problem with pirating a game from small developers with a practical example.

Game Dev Tycoon is available for Windows, Mac and Linux for $8.00. You can purchase it through Greenheart Games’ website. It is currently undergoing the Greenlight process on Steam.

By the way, my first impressions of the game is very positive. I had a lot of fun playing it. Expect a full review in the near future.

← Bitcoin Transactions are Taxable in Canada
Comic Book Pull List for May 1, 2013 →