← A Cheat Sheet to Track Who Does What In Star Trek
Spec Ops: The Line Review: Do You Know the Enemy? →

Super Hexagon Review: My Eyes! The Goggles Do Nothing!

One of the surprise entries on many year-end lists was Super Hexagon. In a year where small indie games were more fondly thought of and better reviewed than many triple-A releases, it shouldn’t be a surprise that the one-man development team of Terry Cavanagh was able to produce a critically acclaimed game. However, I wasn’t sold on what appeared to be such a simple game so I had to pick it up and give it a go.

Super Hexagon eliminates what would be superfluous story in this game. You get a ten second tutorial the first time you play before getting thrown in head first. You control a small triangle that spins around a hexagon at the centre of the screen while walls converge on the middle. The idea is to rotate the triangle around the centre of the screen so as the top point doesn’t come in contact with one of the walls moving inward.

Like I said, it’s a simple concept. However, the execution is perfect. The controls are simple (left arrow rotates counter-clockwise and the right arrow goes clockwise). Your triangle always rotates at the same speed so you won’t get caught off guard. Similarly, there are no graphical hiccups that will cause you to get a game over. 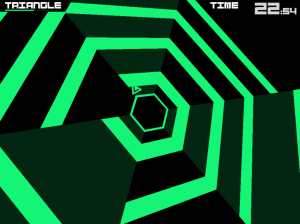 From the screenshots, it’d be understandable if you thought this was a puzzle game as it almost looks like navigating through a maze. Developer Terry Cavanagh describes it as an action game. I think that it’s more of a survival game but I’m not talking about the survival of the triangle you control.

The real battle for survival in Super Hexagon is you versus the sensory overload that this game throws at you. In still images, Super Hexagon looks rather tame. In action, the walls that close in on you change rotation speed and direction while pulsing in time to the music. The colours and tilt perspective of the screen also change. While the chiptune soundtrack is quite good, the loud electronic beats don’t help the disorientation that the visuals cause.

And that’s where most of the difficulty comes from. I’m sure that quick reactions necessary from the walls closing in on the centre of the screen would make it difficult enough. The game is made exponentially harder by the fact that this game will give you a headache and make you dizzy, possibly even nauseous. This makes it nearly impossible to play for any length of time. My longest playing session was about eight minutes. It’s addicting and I can understand why people keep coming back for more punishment. I just can’t do it for any substantial length of time.

Here’s the problem with Super Hexagon: Technically, it does everything correctly. The graphics are crisp so you don’t have to worry about any glitches costing you a shot at the win at 59.9 seconds. Like I said above, the chiptune audio and soundtrack are great. The controls are precise and without lag so you only have your over and/or under-exuberance for failure. 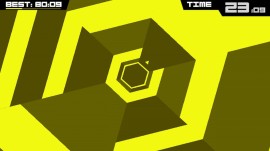 However, the changing colour, pulsing beats and changes in the direction and speed of the lines’ spinning make the game impossible to play. This isn’t me trying to stake a spot in the reviewing world by being a contrarian. My longest playing session was actually 8 minutes. Every time I played this, I got a headache, suffered eye strain or felt nauseous.

When scoring this game, there has to be a little give and take between a game that is, from a purely technical perspective, nearly flawless and the fact that this game makes me physically ill when I play it or watch gameplay. I don’t get motion sickness very easily but Super Hexagon does it every time. I don’t play games to feel ill and I don’t think you should play games if they make you feel ill.

How about I sum up my recommendation for Super Hexagon like this: If you can handle the roller coaster ride this game disorients you with, you’ll have fun. If you are prone to motion sickness, pass on this one.

Super Hexagon was reviewed on the PC but is also available for iOS and Mac. Your impressions of the game may change based on the platform played on.

← A Cheat Sheet to Track Who Does What In Star Trek
Spec Ops: The Line Review: Do You Know the Enemy? →