Life is Strange: Before the Storm – Episode Three Review: The Things We Do For Love

A prequel story has plenty of challenges associated with it. You have to tell an interesting story that people want to play but you can’t step on the toes of the original while backing into characters, setting and plot that builds into the original story. Fans will want a little fan service but not too much because that would be distracting.

The first two episodes of Deck Nine’s Life is Strange prequel came close to stepping on the toes of the original. At times, it feels like it changes Chloe and forces the relationship between she and Rachel Amber to get us to a particular choice-determinant scene in Life is Strange: Season One. However, when focusing on its own characters and world in Before the Storm, Deck Nine hits the right notes and makes a game that feels like a proper Life is Strange game.

The final episode would have to be the trickiest of all for Deck Nine. They have a three-year gap between Before the Storm and Season One which they need to lay the building blocks for but not seamlessly lead us from one to the other so we can account for the passage of time. Fortunately, they pulled that task off. The rest of the episode might be a bit more contentious.

Spoiler Warning: As usual for episodic games, story points from previous episodes will be brought up in this review. If you haven’t played the first two episodes of LiS: Before the Storm, you are likely to have some of it spoiled.

The final part of Before the Storm picks up right after the ending of Episode Two. You’re still at the Amber household and Chloe and Rachel are dealing with the revelation that the mysterious woman in the park from Episode One is Rachel’s biological mother.

The episode starts of predictably enough. Mr. Amber tells the tale of how he met Sera and how their relationship fell apart. The storytelling device of showing it through a viewfinder is an obvious callback to how Rachel first found out about Sera in Episode One but it’s a clever way to show the story rather than tell in a standard adventure game conversation. This also spurs Rachel to the predictable course of action: She had to meet her mother.

After that, the episode definitely deviates from what you would expect. The first scene of Season One charted a course for Life is Strange that made it obvious that it wasn’t going to be a standard teen angst or teen coming-of-age story. However, it wasn’t an after-school special story either. It blended serious topics with interesting characters and supernatural moments. 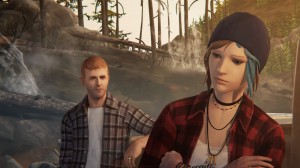 The greatest failing of Episode Three of Before the Storm was that it omitted the character development except at the beginning and the end of the episode. We learn about Rachel, Sera and Chloe’s characters at the start and end of the episode and all that we learn about each of them helps to tie the end of Before the Storm to where we end up at the start of Season One. While there is a relative lack of time spent on our two protagonists and their relationship compared to Episodes One & Two, what time we do spend with the two of them is well done and reveals more about them before Max returns to Arcadia Bay.

As mentioned, the episode goes in a very dark and unexpected direction. While the first act of the episode starts out as expected, Chloe and Rachel get themselves in trouble (which parallels moments from Season One) which results in the afternoon scene at the Amber abode takes a turn for the uncharacteristically implausible. There are odd moments for everyone involved in that scene that take you out of the game. Odd events at Casa Amber include a puzzle sequence for what might be the first time in BtS which ties to an unusual (but very trope-ish) plot twist and a filler confrontation that seemed like it was dealt with not 20 minutes earlier in the episode and brought back up to pad the episode out to three hours in length.

Fortunately, the episode pulls itself together in the final act. Every character acts exactly how you would expect in their given situations. As a result, Before the Storm gives you a satisfying conclusion that helps you to bridge the gap between BtS and Season One. No, it doesn’t hand you all the answers to questions you had coming into this prequel. However, the questions not directly answers are given very easy to fill-in blanks. Not everyone will find that a satisfying conclusion but I thought it was the right ending for Life is Strange’s time in Arcadia Bay and the epilogue scene that wraps up a lot of characters’ stories will break your heart as you’ve come to expect from LiS. It is also worth noting that the adult members of the Amber clan are just pushed aside at the conclusion so their disappearance in Season One and why they don’t care about Rachel’s disappearance is never explained or hinted at. That was definitely a massive oversight by Deck Nine.

As for the audio and visual components, you won’t be disappointed if you liked the voice acting and music of the first two parts. I still think that the comparative lack of licensed music is to the detriment of this game even if Daughter does a good enough job with the soundtrack. If you take away the licensed music from Season One, though, I feel that there are scenes that would be much worse. It makes me think that the correct licensed music would have improved Before the Storm.

Also, this is Rhianna DeVries’ final appearance as Chloe. With the end of the SAG-AFTRA strike, Ashly Burch has signed on to reprise the role of Chloe for the Farewell bonus episode. As nice as it will be to have Burch back as Chloe for one final appearance but DeVries acquitted herself brilliantly in the lead role of Before the Storm, even if she didn’t get near the attention that Burch did for her role in the original. She played the role perfectly so that even though it was a new voice for Chloe, it never felt like a different Chloe.

The final part of the Life is Strange prequel is a mixed bag. There are some great character moments but there are some moments in the story that are out of place. However, when you look back at the pivotal moments of Life is Strange: Season One, LiS has never been shy about getting very serious despite being a series that you would initially assume is a simple angsty teen drama.

Much like the original Life is Strange, Before the Storm’s concluding episode missed the high marks of the rest of the series but still provided a satisfying ending. It doesn’t drag down the whole series because Life is Strange is more about the plot and character development than the direct outcomes of single decisions. A more poetic writer might say that Life is Strange is about the journey rather than the destination. As such, the full season’s rating will be higher than its concluding episode’s.

Life is Strange: Before the Storm – Episode Three: Hell is Empty was reviewed on PC but is also available for PlayStation 4 and Xbox One. Your impressions of the game may differ depending on platform played on, PC specs and whether you think that family drama is less compelling than apocalyptic time travel paradoxes.

Posted on January 18, 2018, in Game Reviews and tagged Deck Nine, Dontnod, Life is Strange, Life is Strange: Before the Storm, PC, Review, Square Enix. Bookmark the permalink. Leave a comment.