Game of Thrones: Book of the Stranger Review 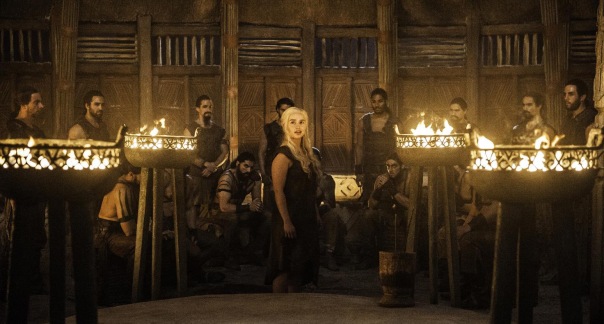 We’re so used to terrible moments of soul-crushing horror moments in Game of Thrones that happy moments are so few and far between that I’m not sure I remember the last happy moment that this show had. This week, though, we finally got some happy moments. Clearly, George didn’t write this episode. Granted, he could have since it was a damn good episode.

If you’re one of those “men’s rights activist” types (whatever that means), this might not be the episode for you. This week’s episode featured powerful women driving the story and characters. You had Sansa trying to convince Jon to retake Winterfell. Dany declined Daario and Jorah’s rescue so she could try her own plan. Maggie tries to keep Loras from completely breaking. And Yara gave Theon a long-overdue stern talking to.

Okay, let’s start with the men. First, Littlefinger is back. We still don’t quite know what he’s up to. Ever since he revealed that he was behind so many of the events that has set the story on the path we’ve gone, we know that his goal is to somehow claim the Iron Throne. Granted, killing Lord Arryn only makes sense if he foresaw the events leading to war with the North and maybe with Cersei having King Robert killed off. Turning on Ned to side with the Lannisters, killing Joffrey, marrying Lysa Arryn and marrying Sansa off to Ramsay all directly served his purpose of gaining allies and weakening his enemies all while remaining fairly inconspicuous.

This week, Littlefinger returns to the Vale from Winterfell. In another one of those “what’s he up to moments,” he tells Robyn to send the army of the Vale to the North to protect Sansa from Ramsay Bolton. That’s Ramsay of the same House Bolton that Petyr was apparently allied with against the Lannisters while simultaneously being allied with the Lannisters against the apparent threat from the Boltons. Ramsay is similar to Joffrey in that you can’t really control him and that was part of the reason why Littlefinger was part of the plot against Joffrey. If Roose was still alive, perhaps the armies of the Vale wouldn’t be marching on the North.

Let’s skip Tyrion for a moment to talk about Sansa. Rather than two ships passing in the night as we have come to expect from Stark family reunions, Jon and Sansa actually reunited. Last week, I read that Game of Thrones was Sophie Turner’s first professional acting job. Now, she’s busy commanding the screen opposite Kit Harrington. It goes back to my Charles Dance as MVP theory. Sophie has spent all this time opposite great actors like Charles Dance, Peter Dinklage, Lena Headey and Aiden Gillan so she’s just been absorbing all this acting knowledge and skill in her ongoing masterclass while on set.

Even before the reveal to Jon and Sansa that Ramsay was holding Rickon hostage, the episode was Sansa pushing Jon to lead the Night’s Watch and/or Wildlings in a bid for vengeance. Sansa framed it in a way that makes you think that she’s more interested in taking back what belongs to House Stark (Winterfell) but you know that she’s out for blood, even if she won’t admit it to Jon. The interesting story beat that got lost in the ending is Sansa saying that she would take back Winterfell with or without Jon’s help. We’ll never know if she would have organized the houses of the North against the Boltons if they didn’t find out about Rickon.

You get a similar scene in the Iron Islands with Yara berating Theon for returning home to claim what would be his birthright anywhere else in Westeros but certainly unworthy of when push comes to shove. Now that Theon has been mentally broken and realizes that he doesn’t have what it takes to lead, he’s willing to cede the throne to Yara and help her win the election for it. To be continued next week.

The High Sparrow, high off being able to talk Tommen down from bringing the Iron Throne’s forces down on the Faith Militant, tries to charm Margaery this week. Unlike her more amiable husband, Maggie sees right through this. Of course, that old man is probably counting on his torture of Loras to break Maggie since she’s resisted what’s been done to her so far better than Cersei. And with the Tyrells and Lannisters on the same page about mobilizing an army against the High Sparrow, you almost wonder what he has up his sleeve. It doesn’t look like he has an elite fighting force but I almost wonder if he thinks that he has the residents of King’s Landing ready to revolt against the Iron Throne when they move against him.

This may sound odd but the scene with Maggie and Loras remind me of the stories that I’ve heard about Guantanamo Bay. Stories of American forces subjecting people to various forms of torture (both physical and mental) to force prisoners to break and give up information seems very similar to what Loras is going through. We haven’t seen much inside the High Sparrow’s prison except to see that food and water provided is just enough to keep the prisoners from dying. With Loras willing to say anything to make what he’s going through stop, you wonder if he’ll just tell the High Sparrow what he wants to hear. That also makes you wonder how much that happens in real life.

Dany’s scenes in this episode seems very familiar. It strikes a lot of familiar notes from previous scenes in the series. Dany emerging nude from the fire is a call back to the ending of Season One. The Dothraki bowing to her calls back to that same finale and the rescued slaves calling her Myhsa to end Season Three. Burning her captors is a call back to the dragons doing that in Season Two. If you didn’t like the latest Star Wars movie, you could call this the Force Awakens of Game of Thrones episodes. Familiar themes and story beats condensed into one serving. Maybe you could call it Dany’s greatest hits. Like many greatest hits albums, you love it because it’s everything you love about the artist in one handy place.

The difference between this episode and what happened in previous episodes is that this was Dany being proactive. We’ve seen her stand back and have her various minions or dragons do the heavy lifting. In this episode, she walked into the proverbial lion’s den and come out as the new queen. While we’ve seen Drogon or the Unsullied create those iconic Dany moments, this was all Khaleesi. She walked into a situation that could have gone very badly, chatted sh*t and the Khals got banged. Dany properly taking charge and standing up for herself, even with her boys waiting in the wings to rescue her, was much-needed character development. Dany went from cool because she has dragons to just proper bad ass.

Alright, now back to Tyrion. As often seems to be the case in Westeros, diplomacy in Essos seems to often involve the business end of a sword. It’s certainly how Grey Worm and Missandei want to do business with the Masters of Slavers’ Bay. Dany did it that way and look how things have gone in Meereen since she started crucifying slavers. Tyrion takes different experiences and, therefore, a different approach into his meeting the Great Masters. No, it wasn’t Team Targaryen’s usual way of doing business which doesn’t sit well with them. For Tyrion, it was about stopping the Sons of the Harpy attacks until they find a way to end them permanently. It’s that ability to see the big picture that Tyrion and Varys bring to Essos which will make Dany more formidable when she reaches Westeros. She lacks the worldliness that her new advisors bring.

I’m sure Game of Thrones has been labelled as unnecessarily violent or misogynistic but this week’s episode was all about the female characters and it was absolutely amazing. The remaining female protagonists (and Yara) all got starring roles and shone. Even Cersei’s small part in which she managed to get her, Jamie and the Small Council on the same page about marching an army against the High Sparrow was pretty epic. This might have been the best episode this season and we didn’t have one instance of regicide.

Next week, Littlefinger shows up in his second straight episode as he makes it to Castle Black overnight. Tyrion and Varys get a new friend. If you like the politics of America, just wait until you see the battle for the Salt Throne. And Bran wargs his way into the zombie apocalypse. Should’ve stayed in the past.

For more from et geekera, follow us on Facebook, Twitter, Google+, Tumblr and RSS.
Support et geekera by buying Game of Thrones: Season Five on Amazon.

Posted on May 17, 2016, in TV/Movie Reviews and tagged Book of the Stranger, Game of Thrones, George R. R. Martin, HBO, Review. Bookmark the permalink. Leave a comment.