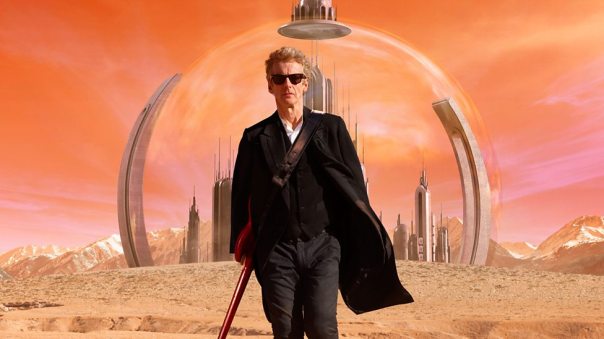 Another season of Doctor Who has come and gone. With an emphasis on longer stories, the individual episodes of Doctor Who have been very up and down this season. While I don’t think that Hell Bent was as strong as last week’s Heaven Sent, it serves as a fitting sendoff to what Steven Moffat wants us to feel about Clara.

As another season of Doctor Who concludes, I wonder if there really was a hybrid after all. At various points, it looked like the hybrid was going to be either The Doctor or Clara as a Timelord/human hybrid. We never got a direct answer to that. Perhaps the prophecy of the hybrid was wrong all along. Perhaps the prophecy did refer to two people, one human, one Timelord, who combined would bring about the end of time.

In the end, the hybrid that would destroy all of time would end up being some wibbly-wobbly-timey-wimey thing. The explanation that Clara’s death is a fixed point in time so changing it would cause all of time to fracture. I suppose I understand it from a plot writing perspective. If you could just double back and change anything, then time travel stories would become horribly convoluted very quickly.

At the very least, we can credit Moffat with this choice in a few ways. It gave Clara some reason to reject a second lease on life. We also had a teaser of this wibbly-wobbly concept early in the season. When The Doctor thought he would die and become a ghost, he referred to it as a fixed point in time. The same principle is applied here. Somehow, it wasn’t when Eleven was shot by the astronaut three or so seasons ago.

I found the decision to bring Clara back as a companion for one last trip in the TARDIS to be a bit confusing. In the last two episodes, we saw both Clara and The Doctor come to grips with Clara’s death. The audience had their chance to say goodbye. Now, we get to bring Clara back through Timelord magic so everyone can say goodbye again?

It felt like the return of Clara undermined her death just two weeks ago. I understand that the whole episode was built around The Doctor trying to save Clara from death when there was nothing he could do in London. It made sense in the end but I can’t help but think that Clara’s part in the episode could have been shorter. We’ve already had one long goodbye with Clara, after all.

What made this goodbye work was Peter Capaldi. I know that many (i.e. Tumblr) weren’t happy that we were getting an older man as The Doctor but what we were getting was a great actor at his peak. The likes of Eccleston, Tennant and Smith were all still learning as actors. They played their roles well but we’re seeing a massive range from Capaldi and Twelve. While Capaldi is a fan of classic Doctor Who and it informs his portrayal of The Doctor, he’s putting his own touches on the character and making it his own.

As promised in the trailer, Maisie Williams was back as Ashilder/Me. Her part of the story was completely inconsequential to the whole story of the episode but I will give Williams lots of credit. She was absolutely magnificent here. I think her turn as Me in the short time she was in the episode was better than any performance she turned in previously on Doctor Who or Game of Thrones.

This episode did feature a lot of moments for fans scattered throughout it. A regenerated Rassilon turned up as the Lord President of Gallifrey (sadly not Tim Dalton). The Doctor set up shop in the barn from the 50th anniversary special. A bunch of The Doctor’s old enemies turned up in the Cloisters. The diner where The Doctor met Amy, Rory and River a few years ago played host to The Doctor and Clara’s final (or about 47th goodbye). And we even had The Doctor stealing a TARDIS and running away just like what started the series. It also looked like the original TARDIS used in the 50th Anniversary special about the first Doctor.

Overall, this was a pretty good episode. I don’t know what I was expecting coming into it but I’m not unhappy on my way out of it. I just feel a little offput by the fact that Moffat doesn’t want to let go of Clara. When he killed off Amy and Rory, there was no second goodbye (Eleven’s regeneration doesn’t count). Here, we had a series of goodbyes. I didn’t care about Clara any more after this than I did before. The difference now is that I know we are moving on.

The next episode is just under three weeks away. River Song is back for her first appearance alongside Twelve and her first appearance in two-and-a-half years. The Doctor and River are back together to save River’s husband. Oh, the perils of love and time travel. We get to find out what is happening on Christmas Day in The Husbands of River Song.