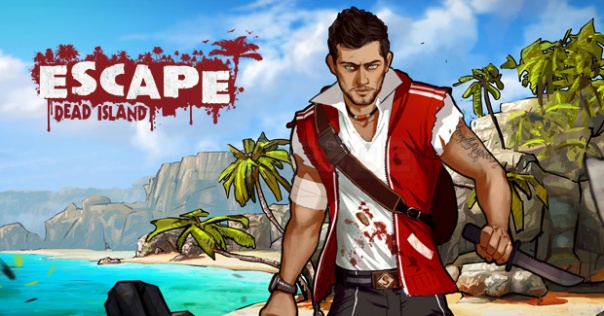 I give up. I’m throwing in the towel. I am tapping out. I’ve had enough of Escape Dead Island after six hours and two attempts at playing the game.

This is a game so devoid of merit that I refuse to play any more of it. I haven’t completed the campaign and I’m not sure that even the most brilliant plot twists in the history of gaming (and the writing indicates that to be as remote an unlikelihood as Valve going out of business) would make me change my rating of this game.

Now, before we get into the review, I will admit to the following: On Steam, I’ve racked up about seven hours (Steam says 6.9 hours to be precise) through two attempts to play the game.

The first ended when I went exploring, wasn’t allowed to back track through walking or a save (because there are no manual saves) and was killed by enemies that were too overpowered and numerous for me to handle three hours into the game. My second attempt ended along the main campaign when I got killed while outnumbered and the bad checkpointing in the game set me back five minutes through a cutscene and a tough fight where I was well outnumbered and had already died twice.

Unlike usual when I play games for review, I actually took some notes for Escape Dead Island. I’m not sure why I did that. Perhaps it’s because the missteps of this game are far too numerous to remember without some help or perhaps I thought continuing to play this game would irreparably destroy my brain. 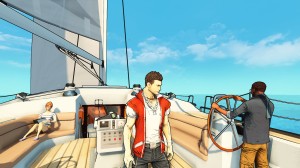 Anyway, you play as Cliff Calo, the one-percenter frat boy of a son of a media magnate, who is off to Banoi to report on the zombie outbreak on the island (as documented in the original Dead Island) as it has been cutoff from the outside world. However, he didn’t go to Banoi. He went with two of his friends, artist Devan and journalist Linda, to the island of Narapela because Devan steered Cliff’s yacht there for some reason. Why are you investigating Banoi on Narapela? It’s never explained but it sure seems very convenient as the game progresses.

In addition to the plot not making sense, the characters are terrible and have no redeeming qualities. Only Devan is remotely well voice acted. The character himself is unremarkable otherwise. The Linda character is okay in the cliched damsel in distress role but her dialogue and acting is subpar. Cliff is such a great character that he deserves to be zombie food. Who decided that the lead character should be someone that only frat boys would connect with and everyone else would hate probably should be a project lead on a game.

The story tries to throw you for a loop with hallucinations or dreams or some such to keep you on your toes so that it seems like the plot has some weight and merit to it. Maybe if I played this whole game, all the hallucinations might have had a purpose in the storytelling but the plot summary doesn’t fill me with much hope because Wikipedia makes it sound like you would have to be high as a kite for the whole six to seven hours of the game to find merit in the ending at all.

As for the gameplay, Fatshark describes Escape Dead Island as a survival-mystery game. The user tags on Steam would peg this as an action-adventure survival-horror game. The problem is that Escape Dead Island doesn’t really know what it wants to be. I’ve never seen anything close to either survival or mystery in this game. There are no puzzles or mysteries to solve. I have no idea how anyone could think this is anywhere close to a mystery game. As for survival, there is no resource management. Health is regenerating but is only indicated by the outside edges of the screen getting covered in blood. Saves are done automatically at checkpoints but the checkpointing is, as I mentioned at the start, poor. They might have been better served to do both checkpoints and quick saves so that way you won’t get set back forever every time you die.

The stealth mechanics are hit-and-miss at best. You just crouch, walk up behind a zombie and hit E to stab them in the neck. They’ll often see or hear you coming regardless of how good a job you are doing at being stealthy so you have to move quickly to kill them. And it’s the same animation of neck stabbing with blood gushing out every time. I thought they were zombies. DESTROY THE BRAIN!

The game does force you into action combat moments, though. You swing your melee weapon at the zombies to do damage and you can take limbs off though it doesn’t affect how much damage they do or their ability to attack. Just swing away until they’re dead. Guns are also a part of the game as you would expect from any zombie apocalypse game. If you liked how guns did damage in Dead Island, you’re in luck! It’s the exact same here. Shoot the generic zombies in the head three times to kill them. Or you can shoot them in the ass three times to do the same damage? Why give us the guns if targeting doesn’t matter?!

Maybe I should move on. The graphics are done in a graphic novel style. From long distances, nothing looks particularly good. There’s no detail so everything looks very plain. Up close, same story. At a mid distance, the graphics look okay. The problem is that only a couple of characters have any detail so nothing looks good. At least they put the effort into Cliff since you’re staring at him a lot in this game. The sounds are so quiet that I have no idea if they’re good or not. The craptacular voice acting doesn’t leave me much hope for the rest of the sound design.

And then there are the other problems that were just glossed over when the reports came in from the QA team. The camera will clip through doors and shudder something fierce when Cliff crawls through tiny spaces. The flashlight you acquire will shine through solid objects. I don’t think the AI reacts to that but the stealth mechanics are so poor that I have no idea if I’m right. Dead zombies (no, that’s not redundant) will disappear with a bright yellow glow as if they’re spontaneously incinerating to clean up the ground. The island of Narapela is filled with tunnels that take you to various destinations around the island. You would have thought that they would have learned after no one liked Mass Effect using elevators to obscure loading. And those are some long tunnels for making us backtrack to the same locations over and over again. 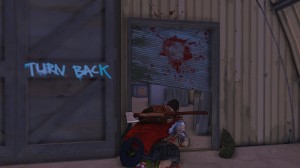 Even though I bought it for $4, I don’t think I’ve ever regretted buying a game more. I wish I bought it through Steam so I could have gotten a refund. I’m not sure that I can be any more clear with a conclusion than that.

Before this game was released, I sent in a request to Deep Silver for a review copy. They told me that they were too small a publisher to grant everyone’s request and because of our size, et geekera would be given a pass on the copy. It turns out that Deep Silver was just saving me from myself. I should probably send their PR team a fruit basket for not giving me a copy.

Escape Dead Island was reviewed on PC but is also available for PlayStation 3 and Xbox 360. Your impressions of the game may differ depending on platform played on, PC specs and whether your deep-rooted self-loathing manifests itself in your choice of video games.