Game of Thrones: The House of Black and White Review 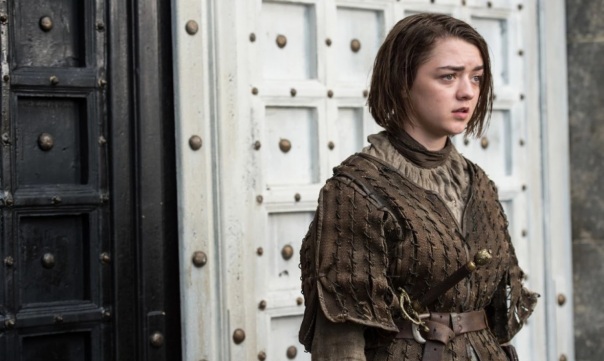 I was a little surprised last week when most of the people I know weren’t so high on the season premiere. I don’t know what there was to not like last week but not much changed this week. Sure, death got a big return this week after a week off in The Wars to Come but sex and violence isn’t the be all and end all of TV.

Much like last week, we got a look at many of the characters around Westeros. Unlike last week which saw some loose threads tied up, a whole host of new stories were kicked off this week.

While the episode starts in Braavos, the real heart is, as always, in King’s Landing. Cersei may not have been in charge when Tywin was ruling the Seven Kingdoms as the Hand of the King but her word always had more sway with his power behind her. Since Tywin’s death, the vulture circle over the Lannister family and seem poised to make a renewed effort to pick its bones. Not since Robb Stark’s march south has anyone smelled blood in the water at Casterly Rock or King’s Landing.

But Cersei is trying to hold it all together by making herself the effective Hand of the King until Tommen comes of age. While she’s surrounded herself with yes-men in the forms of (don’t call him Maester) Qyburn, Grand Maester Pycelle and Mace Tyrell, Uncle Kevan Lannister is cut from very much the same cloth as Tywin. He’s the one to call out Cersei on not having any true authority and is the first to walk out on her new Small Council until the King starts speaking for himself.

When Tywin did the same under Tommen’s rule, no one questioned him because he’s Tywin Lannister. No one would question him being the most powerful man in the realm when he was only the King’s Hand. Cersei, because she’s not Tywin and not a man, is not granted the same respect. Were Jaime to have pulled that trick, he might have stood a chance because of his record as a knight. Cersei gets no such pass and we have her in a power struggle with a man she can’t bully in much the same way that she couldn’t really manipulate Tywin (apart from threatening to tear him down by publicizing her and Jaime’s incest).

And Kevan’s making a smart play here too. Tommen is too young and too passive to be able to make all the decisions himself. He seemed more than willing to effectively hand off ruling Westeros to Tywin. If Kevan can find himself the Hand, he would be the effective ruler of Westeros. Of course, the Tyrells are banking on that wedding to take control of Westeros themselves, even if Mace is too bumbling to see where that’s going. Maybe I like the backroom politics of King’s Landing too much but the possibilities of where we go from here are just too great not to keep watching.

In a slight parallel to Cersei, Daenerys Stormborn of the House Targaryen, the First of Her Name, the Unburnt, Queen of Meereen, Queen of the Andals and the Rhoynar and the First Men, Khaleesi of the Great Grass Sea, Breaker of Chains, and Mother of Dragons is learning that conquering is easier than ruling.

Granted that’s been a theme of Dany’s time in the Great Pyramid of Meereen but while Cersei sees her grasp on power in King’s Landing fail, Dany is losing her people in Meereen. She’s trying to change the culture of Meereen overnight and seeming to face pushback at every level. In trying to rule, all she’s managed to do is make things worse in Meereen.

While the decision to kill the guy was the right one, how she carried it out tears Meereen apart and leave it on the verge of civil war. Her actions were certainly justified in the eyes of the law but in terms of political capital, she’s burned it all faster than one of her dragons.

For all the hopes that Varys and friends have pinned on Dany to rule the Seven Kingdoms, if she can’t rule one little town in Essos, what can she do ruling the whole of the Seven Kingdoms. Maybe with the right advisers, she’ll be in good shape as a ruler. For now… Maybe Tyrion and Varys should have stayed in Illyrio’s palace.

Meanwhile, in Braavos, Arya gets surprisingly little focus in an episode that you would think would be about her given the title. The House of Black and White is home to the Faceless Men whose ranks include Jaqen H’ghar. However, with so much going on this week, she didn’t get a lot of time.

We did get to see what might be the final step of Arya’s evolution before whatever happened in the House of Black and White. Arya went from a little girl in Winterfell to a girl who gives absolutely zero f*cks about anyone in her way. No, she didn’t get anything epic in this episode but the real payoff is beyond the black and white doors so I guess the real movement in her plot starts next week.

Meanwhile, at Castle Black, Jon didn’t get in as much trouble with the Mannis for mercy killing Mance Rayder as you would think. Of course, Mannis wanting to use his claimed lordship of the Seven Kingdoms to declare Jon a Stark and therefore Lord of Winterfell to rally the North behind him may have had the most to do with that.

While I’ll often tell my friends that I see a pieces of myself in Tyrion and Tywin and Varys, I do respect Jon’s naivety. He turns down Stannis’s offer in order to make his own name, even if it’s as a Snow. There’s really nothing that says going it alone more than being a bastard in Westeros. I’m not sure there’s a trait of a character in Game of Thrones that I admire more than Jon’s desire to be something more than Ned Stark’s son and riding the family name. He wants to go out and earn his keep.

Character analysis out of the way, it makes Jon turning down the Mannis make sense. However, it didn’t make Jon becoming the Lord Commander any less predictable. It was bound to happen, though I thought Ser Alliser Thorne was already dead so it would make Jon’s election a foregone conclusion. Still, it seems to wrap up Jon’s story fairly nearly. Apart from White Walker attacks eventually.

This week’s road trip with Tyrion and Varys didn’t provide us with anything particularly meaty in terms of plot development. It did provide us with a look at their places in life from their perspective. Varys’s motives always seem a little guarded (I can sympathize) but you trust that he means well. He also doesn’t seem to desire power as his own end but desires himself a part of someone else’s power. An interesting way to get power but I’m not sure that makes him better than anyone else when you isolate him from everyone else’s actions.

Meanwhile, Tyrion admitted that the reason that he stayed in King’s Landing for so long was because of his love of power. Despite being stripped of his Handship when Tywin arrived, he loved the feeling too much to leave. Even if he was only a bit player in the political games of Westeros, his desire for that power was always going to be his undoing. Well, isn’t power everyone’s undoing in some way or another.

Still, I couldn’t help but feel that this whole scene was a setup to a gag where Tyrion says that Cersei’s hunt for his head will result in every dwarven head in the realm landing at her feet and the hard cut to a dwarf’s head presented to Cersei.

Once again, we had an action-light episode. Sure, I’m fairly certain it had more deaths this week than last but sex and violence shouldn’t be the only things that matter in Game of Thrones. Many of my friends and acquaintances seem to watch the show in the hopes that there’s an action movie every week.

Your enjoyment of absolutely anything depends on what you want the most or can take from it. If you watch Game of Thrones for action, you won’t always find something for you. The dialogue and endless possibilities of where the show can go keeps me coming back but I’m looking for a great narrative with great characters.

Next week, it’s a preview of a bunch of things that don’t seem to make sense at first glance. Cersei is still on the warpath. Arya is trying to get by at the House of Black and White. And Jon Snow is still not making friends at Castle Black.

Posted on April 21, 2015, in TV/Movie Reviews and tagged Game of Thrones, George R. R. Martin, HBO, Review, The House of Black and White. Bookmark the permalink. Leave a comment.