← Get Hyped for Season Five with The Official Game of Thrones Trailers
Game Trailers Roundup for April 13, 2015 →

It took a long time but it looks like Telltale Games finally found its strong suit with The Walking Dead series. That story kicked off their foray into mature stories, strong characters and meaningful interaction. The gameplay around it wasn’t the emphasis but rather a means to get you to the next character moment.

While Telltale’s new Game of Thrones series didn’t debut at the peak of TWD’s excellence, they did a great job with the talking portions of the game. The memorable moments in the first episode came from the interactions of the two Forrester children who were talkers rather than fighters. The second episode of Game of Thrones has a little less conversation and a little more action but that doesn’t make it any less satisfying.

Spoiler Alert: As per usual for our review of these episode Telltale Games, the details of the episode being reviewed will be kept as spoiler-free as practical. The details of previous episodes and the first three season of HBO’s Game of Thrones TV show are fair game for discussion. In fact, if you haven’t played the first episode, don’t even look at the next paragraph because that has a massive spoiler from Episode One.

As I noted in the last review, there are five POV characters that you take charge of and three were featured in Iron From Ice. Well, there were five POV characters. Young Lord Ethan Forrester, Ethan the Brave, was removed from the dramatis personae by Ramsay Snow in the concluding moments of the first episode. The final two characters are introduced at the start of this episode.

The episode starts with Asher, the outcast of the Forrester clan whose appearance was so overwhelmingly foreshadowed that Telltale could have called this episode “Game of Thrones – Episode Two: Asher Appears In This One” and it wouldn’t have been a spoiler. 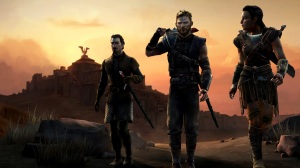 Having been banished by his family from Ironrath, Asher became a sellsword in Essos and had himself a little B-movie brawl after a deal gone wrong to start the episode. It’s a little bit of drinking, a little bit of comedy and a little bit of brawling to start off. It’s not what you’d expect from Game of Thrones unless you had Bronn on-screen. Asher also gets a task that will keep him out of the political games of Westeros as he, companion Beskha and Uncle Malcolm (who made the trip from Ironrath in E01 to find him) are off to sign up the Second Sons to help rid Ironrath of the Whitehills and Boltons.

Maybe it’s because I’m a fan of Bronn or maybe it’s because Asher’s time on screen is lighthearted compared to the other characters but Asher’s appearance was a much-needed breath of fresh air in an otherwise serious game. A little levity helps you cope with an otherwise hopeless existence for our clan of protagonists.

So while Uncle Malcolm somehow manages to leave Ironrath after Garred and yoga teleports halfway across the world to Yunkai to bail out Asher at the start of the episode, Garred is only now arriving at Castle Black on horseback. It just doesn’t make any sense but I suppose we can’t really wait until Season Two for Asher’s first appearance.

Anyway, Garred continues his role of being the Forrester’s Jon Snow by joining up with Jon Snow. In my Episode One review, I mentioned that the Forresters were far too similar to the Starks for my liking and Garred is the worst offender. If you remember the story arc of Jon joining the Night’s Watch in Season One of the TV show, you’ll see that exact same sequence play out here with Garred.

The saving grace of Garred’s part of the episode was Kit Harington making a cameo appearance as Jon Snow. I’m not sure I liked Jon Snow’s appearance as much as Cersei’s appearance in the last episode. That one was more sizzle than steak when it came to the story of the series so far but it sure gave that sequence the proverbial big fight feel. Including Jon Snow makes sense if only to reinforce the parallels between the Forresters and Starks and Garred and Jon in specific.

While many of the talking moments in Game of Thrones still feel a bit gamey in that you’re trying to pick the right piece of dialogue to meet a desired end, the sequence between Garred and Jon was a lot like Lee and Clementine. It was a conversation between two people, not a sequence of decisions that you will be evaluated on. Maybe that’s the biggest criticism of Telltale. Too often it feels like you’re playing a game rather than being a part of the story. Garred’s part might have the weakest story but it’s also the most story-like at the same time.

Sansa- I mean, Mira also returns from Episode One. Much like the last episode, Mira is a part of the action but doesn’t really seem connected. She’s trying to do her best to help her family but what she does either has no effect or doesn’t really matter in the long run.

After being offered help by Tyrion Lannister, she gets further embroiled in the politics of Westeros. This should make her story the most compelling of the bunch because she becomes a supporting character to the political gamesmanship between Cersei, Tyrion, the Tyrells and the Whitehills. There’s some minor payoff in the final sequence of the episode which I thought would play out differently. For now, there isn’t much to this part of the episode in terms of immediate payoff. Mira’s part of the series certainly has the potential to be the most compelling and most important. It’s just a matter of actually getting there.

Our final protagonist is introduced right after the opening titles but can’t be named because it would be a massive spoiler. It makes writing a spoiler-free review exceptionally difficult since most of the heart of this episode is with this final character in Ironrath.

Suffice to say that the unexpected introduction of this character caught me off-guard but adds a lot of weight to what is happening in Ironrath. The decisions made with regards to the Whitehills and Boltons and the future of House Forrester feel like they carry a bit more weight than the last episode. While there was some immediacy to the decisions Ethan made, he was basically the Bran stand-in. No one ever really bought that he was House Forrester’s last great hope.

This also built to a great ending sequence over a song that included all of our remaining protagonists in a montage. While I thought this was a well done montage, it seemed so out of place for Telltale and Game of Thrones. I know that they love their random music at the end of the TV series but that’s usually reserved for the credits, not the final three or four minutes.

There’s nothing really new to talk about in terms of the graphics. I do find it a little funny how bright King’s Landing is compared to Ironrath. While the dark, earthy colours that dominate the landscape of the Forresters’ home makes sense given the danger to the family, it’s King’s Landing that

In looking back at The Lost Lords and writing this review, the general theme is setting up the future. Apart from the appearance of one new character, there wasn’t much noteworthy this time out. It’s all about a setup for the subsequent episodes. What is coming down the pipe seems like it’s going to be more interesting than what Telltale delivered for us in Episode Two.

Perhaps the biggest problem Telltale has is the expectations. They’ve done such a great job delivering on other’s source material and HBO has done such a great job delivering on Martin’s A Song of Ice and Fire books that we expect greatness out of the blocks. This was still a good episode but we don’t accept “good” from Telltale any more. Remember when people only expected barely passable from Telltale? Those days are long gone.

Game of Thrones – Episode Two: The Lost Lords was played on Windows PC but is also available for Mac OS X, PlayStation 4, Xbox One, PlayStation 3, Xbox 360 and iOS. The review code for this game was provided by Telltale Games. Your impressions of the game may change depending on platform played on, PC specs and whether you want to be a Ranger, a Builder or a Steward.

← Get Hyped for Season Five with The Official Game of Thrones Trailers
Game Trailers Roundup for April 13, 2015 →