Doctor Who: The Caretaker Review 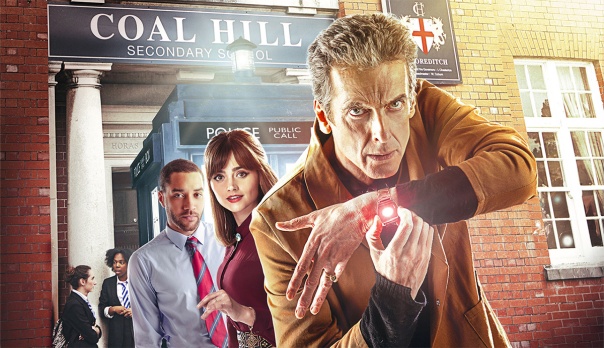 One thing that tends to happen when you tag along with The Doctor on the TARDIS is that you leave your real-life behind for a few months or years. That’s not the case if you’re Clara Oswald. Though she’s done many, many things while a travelling companion on the TARDIS, the one thing she hasn’t done is pack her things and move in.

This week, we finally gotten some semblance of payoff to Clara’s dueling lives as The Doctor becomes The Caretaker (who likes to be called The Doctor) at Clara’s school. Now she has to juggle maintaining her sanity while her personal life and time traveler life collide.

This week’s episode was largely a character piece. That shouldn’t be much of a surprise considering that this episode was written by Gareth Roberts who most recently wrote The Lodger/Closing Time duology.

And compared to blending in with otters, The Doctor does seem to do a good job of blending in with the humans. He comes off as decidedly eccentric as opposed to a weirdly perfect alien as Eleven did in his Roberts-penned episode. It makes Twelve seem more like a crazy old man rather than a lunatic alien to the uneducated. We know he’s an alien and can see right through the facade. Everyone else just thinks he’s a bit odd.

Clara was put at the forefront of this episode as we explored her life and watched as she tried to keep both her personal life and TARDIS life from falling apart. Not helping is that fact that The Doctor and Danny keep trying to feel each other out, both from the perspective of The Doctor being a lunatic caretaker and The Doctor being a lunatic alien. Neither seems to particularly care for the other with The Doctor willing to write off Danny as a soldier who is some brainless killing machine and Danny thinking that The Doctor basically has a superiority complex that will get Clara into more trouble than she can handle.

While both come to a grudging peace by the end of the episode, you know that this is setting the ground for both future conflict in Clara’s like and Jenna Coleman’s acting career. We keep seeing the stars of Doctor Who moving on to new and apparently better things and giving companions a reason to go gives Moffat a way to eventually write out companions or introduce new ones organically. I didn’t quite like how Rose or Donna were written out. It always seemed forced to as it would be memorable as opposed to something that would happen to a normal human.

While Clara is the anchor of the plot (as she often has been this season), Danny was the emotional anchor to the episode. While it was becoming standard to see Clara wrestle with the needs of her Earth and space lives and The Doctor poking at her about it whenever she brought it up, this was the first time that Danny had to deal with Clara’s secret life. Being a guy, he’s having trouble reconciling that Clara would be willing to travel across the universe with a man she’s not related to and not be in love with him.

Now, Clara has a couple of alpha-males in her life and one of them is likely to be alpha enough that they’ll put her between them. I don’t know whether that’s a standard writing trope or standard life experience that is making me expect that but I’m actually looking forward to it. We got a little taste of it this week but I expect we’ll get a whole story dedicated to more than a taste in the near future.

And after last week’s unique alien, this week was a relative let down. It was something that was a bit paint-by-the-numbers. A generic villain that just wants to shoot things with no apparent motivation and whose only purpose seems to drive conflict and a resolution to said conflict between The Doctor and Danny. The generic nature of the villainous alien was probably an intentional choice. Going with a tried and true or new and noteworthy villain would have taken the focus off of the relationship between Clara, Danny and The Doctor.

Although brief, Missy’s appearance was important to make us remember that the season is building to something. Considering how out of place this week’s alien was in the timeline, I’m starting to wonder if Missy isn’t just running the afterlife but building her own. Two of the three episodes with Missy had new aliens. It’s just a theory but it certainly makes her menacing to go along with being an intriguing unknown quantity.

Overall, this was a fun little episode that you’ll like if you don’t mind a little character development. We learn a bit more about Twelve, Clara and Danny in a little self-contained episode. A lot of critics quickly threw out that this was the best episode of the season so far. Personally, I was a bigger fan of the last three episodes but one thing that we can all agree on is that the first half-dozen episodes of the season have been maybe the best run of episodes since Doctor Who returned in 2005.

Next week, TO THE MOON! Okay, that last line might have been a bit of my support for Dogecoin coming through but the next episode is still on the Moon. The Doctor and Clara find themselves on an abandoned mining colony on the moon that shouldn’t be abandoned. Maybe it has something to do with the evil spiders running around in the dark.