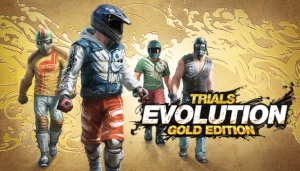 Do you remember Miniclip? When I was in high school many a joke class (like intro to business, civics and career studies) was spent playing flash games that wouldn’t crash the old, cheap computers. The original mainstay was miniclip.com, which, I’m slightly surprised to say, still exists today.

That’s where I first played the Red Lynx’s Trials series (it was called Trial Bike back then). I had seen proper Trials on TV on an old show called Motorsport Mundial so I knew what Trials was about and was instantly hooked on the flash game. Naturally, I’d have to pick up Red Lynx’s first PC Trials game since it left flash.

The problem is that while Trials Evolution, the most recent Trials (né Trial Bike) game, is a critically acclaimed game on the Xbox 360, Red Lynx should have kept their PC games on flash.

Normally, I would start a review by talking about gameplay or story first but I need to start with a major issue that could make this game unplayable for some people.

This is a terribly optimized PC port. Whether I’m running with most graphics options at high (or “on” in most cases as this isn’t a great PC port before the optimization issues) or low (including at a lower resolution with every possible option at low or off), there is noticeable framerate chugging. I can play Mass Effect 3 and the first Crysis at high with a smooth framerate but it is impossible to get a consistently good framerate out of Trials Evolution.

It’s not just me having this issue either. Checking user reviews and the Steam forums shows that this is a common issue. I’ve seen at least one Red Lynx staffer on the Steam forums issuing patchwork fixes like disabling SLI or multi GPU something or other on NVIDIA cards to get the framerate to run smoothly.

Here’s the problem, though. People are reporting that this issue has been known about since early in the beta. Red Lynx has yet to fix it but say that they are working with graphics card manufacturers to develop drivers to make the game works. While I can appreciate that PC ports aren’t the easiest thing in the world to do, releasing a port that has issues for what appears to be a large portion of the player base isn’t acceptable. Saying a game will play smoothly when patched also isn’t a reason to give it a good score when everything else is alright with the game.

Personally, I found the framerate chugging to be very annoying but it wasn’t entirely unplayable. I definitely would have enjoyed it more if the framerate was smooth. However, this issue will be taken into account in the final score. No extrapolation of how it should play if properly patched so I wouldn’t have to use a graphics card work around (which is really a terrible and inexcusable solution to a problem the dev should be working on) will be used in scoring Trials Evolution. It stands on the merits of its release.

If you can get past some of the terribly optimized ridiculousness of this game, there’s a good game to be played. It’s come a long way from the serious trials games of the flash era to one with a more extreme and cartoonish style. It’s not a professional trials game but an arcade style game with fantasy tracks around construction zones, warehouses and the like. There are big jumps and explosions in every track and usually multiple times per track.

The gameplay is simple, addicting and fun. You get some basic training on how to tackle the various obstacles you’ll encounter and are left to have at it. There are plenty of tracks and events to tackle thanks to getting both Trials Evolution and Trials 2 as part of the Gold Edition so you’ll have plenty of time to sink into the game. There are medals awarded based on the speed you complete a track and the number of falls (faults) you have in completing it. The difficulty ramps up as you progress which means it’s harder to complete tracks without a fault unless you learn the layout and take it slow and steady rather than gassing it the whole way.

My biggest problem with the gameplay is the camera. It sits in a sort of side three-quarters view where it’s mostly alongside you but a little behind. Most of the time, that’s not an issue. The problem is when you go over a big jump. The camera pulls back and suddenly the perspective is so bad that you can’t tell the angle of the ground you’re landing on. Basically, the big jump the game encourages you to take because of the cool camera angle and general gaming adrenaline rush will lead to a fault because you can’t see how to land without crashing. That’s just a poorly designed camera, plain and simple.

There is also the occasional issue where the game doesn’t realize that you’ve crashed. You have to manually reset to the previous checkpoint. While it’s not a game breaking glitch, and even occasionally come in handy, in a game where seconds are important, this sort of glitch can be the difference between a silver and bronze medal.

Let’s get back to graphics for a minute since I didn’t really delve into it beyond the terrible framerate issues. When you run the game a high settings, it looks good. There are nice shadow and dust effects. The background scenery looks good. The environments are actually quite well put together. Hell, even the explosions and particle effects from the explosions are well rendered for a game with a cartoonish art style. The problem is that it all looks terrible, especially the shadows (which turn jagged, pixellated and generally ugly), on low settings.

Fortunately, whether I run high or low settings, the game performs the same for me. Hell, I think the framrate was smoother on higher settings. And, yes, it does have to keep coming back to that. Just because it’s a $20 PC port doesn’t mean that we should excuse a near game-crippling issue such as that.

I haven’t mentioned the audio because there isn’t much to note. Generic guitar riffs make up the soundtrack. There’s also some stereotypical sounding hooting and hollering from your rider when he makes big jumps and lands hard. At least the explosions sound good. 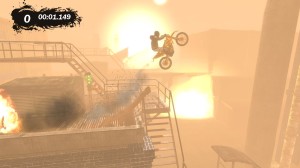 I know that I didn’t spend a lot of time on what I liked about the game as opposed to time on parts of the game that need fixing but that’s part of game criticism. If I wrote only glowingly of the gameplay, you’d probably miss the part that this game comes dangerously close to being unplayable.

And that’s what makes scoring it so difficult. If I was reviewing this for Kotaku, I would toss up a “Not Yet” score because it could be a very good game after fixing the framerate issues. The problem is that it’s only barely playable as it was released.

The gameplay was fun and the controls were reasonably precise… Well, less so in menus but you’re probably not going to spend too much time there. As it stands, it’s almost worth a play and it will be when it does get fixed. For now, it’s gameplay can’t carry it past the graphical issues. That patch or driver update will be worth two points out of ten. I don’t score on potential, though.

Trials Evolution Gold Edition is available for Windows PC. The two games making up TEGE, Trials Evolution and Trials HD, are also available for the Xbox 360 through the Xbox Live Arcade. Your impressions of the game will vary depending on your PC specs, if your graphics card isn’t prone to the stuttering issue that appears to be most common with NVIDIA cards and if the game was patched subsequent to release.