Before I get too far into this, unlike 400 Days, this is a standalone miniseries and this doesn’t tie into the story of Telltale’s other The Walking Dead games. So if you’re looking for some insight into the adventures of Clementine, it’s not here.

For those unfamiliar with The Walking Dead comics, Michonne doesn’t appear for about fifteen issues in a row in the 100s. (No, I don’t know where it is in relation to the TV show.) The purpose of this miniseries is to fill in the gap in her story.

If there’s one thing that recent Telltale efforts have taught us, it’s that while Telltale Games can do a very good job of crafting a story when given creative freedom, when they’re constrained, they struggle. The first season of The Walking Dead gave them a world and theme to work with but Telltale had carte blanche to do the rest so long as they avoided the comic storyline. They did and vaulted to the top of the heap among developers.

Compare that to Telltale’s Game of Thrones. Sure, there were many questionable decisions with the character writing. The biggest issue was trying to wedge a side-story into the greater narrative of A Song of Ice and Fire that interacts with that narrative without actually impacting it in any way. The result was story and characters that felt hollow and inclusions of the main Game of Thrones plot that felt like fan service rather than meaningful parts of the story.

The task Telltale took on in TWD: Michonne is to get her from when she gets separated from the group to when she returns without anything actually happening that changes the plot of the TWD comics. They’re pigeon-holed into a situation where past effect leave the fans expecting them to do something meaningful and impactful but circumstances won’t allow that to happen.

Sure, Telltale plays a little bit into Michonne’s pre-apocalypse background and introduces some new characters. The problems are that we launch into the episode in the middle of a fight that’s never explained, new characters that are never developed and an abrupt cliffhanger that feels meaningless because you have no reason to care about any character other than Michonne and that’s only because you know her from TV or the comics.

After playing through Episode One: In Too Deep, I can’t help but feel that the Michonne miniseries is being written specifically for comic readers. Only if you already know what happens before and after the events of this miniseries will you have any context or understanding of what’s happening. The feels like a game made for a niche audience of long-term TWD comic readers and that Telltale forgot about the rest of us.

It’s all a shame because the voice acting is pretty good. Samira Wiley does a pretty good job as Michonne though I was a little surprised that Telltale didn’t get Danai Gurira to reprise her role from the TV series. Standouts in the voice acting department were Telltale regular Cissy Jones as Norma (making it the second time in a week that I’ve pointed out her voice acting) and Friday Night Lights alum Derek Phillips as Randall.

The big problem for the voice actors is that their work is far too often omitted or shortened. There are subtitles displayed for lines that are never played. My biggest issue is that when you select a dialogue option, it cuts off all other dialogue in the scene to play your choice. I understand that there’s a timer in which to choose dialogue but what’s the point of voicing a conversation if you’re not going to hear half of it.

I don’t know if this is a limitation of the Telltale Tool, a glitch or that Telltale could never be arsed to program around it but if you want to tell a story, let the actors tell the whole thing, not just bits and pieces. Let all the lines play out and then play the line that I select as the player. And what’s the point of the timer if choosing early or late in the timing window doesn’t make an impact either? It’s just another reason to play all of the dialogue in a scene. 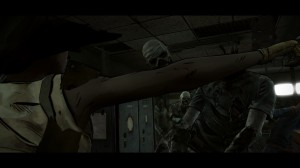 If you’ve played a Telltale game in the past, you’ll be familiar with the mechanics. It’s all clicking and QTEs. The prompts for QTEs are a little more stylized like keyboard buttons. Oddly, Telltale decided to colour successful QTEs in red which is completely counter-intuitive.

There are some new and tweaked mechanics for actions. Gone are the always-on indicators of what is an interactive object. They only appear when your mouse hovers near the object. Combo button presses make an appearance from Tales From The Borderlands. New is the click-and-rub mechanic in which you click the left mouse button (but the game doesn’t tell you to do that) and wiggle the mouse back and forth (but doesn’t match your action to the animation).

The visual style of the game is very familiar to anyone who has played other Telltale The Walking Dead games. The big change is the re-styled combat. The game goes wide-screen to give an action movie feel to the fight sequences. Even if it’s still just the same old QTEs, at least it has a nicer coat of point.

For better or worse, The Walking Dead: Michonne is the same old Telltale formula that you’ve been playing for dozens of episodes. As much as I like their ability to tell stories and write characters, if you can predict the story beats before they happen and if the gameplay feels the same as it has every other time, the game is going to feel tired, old and just not fun.

I really wanted to like this new miniseries but there wasn’t much to this episode. There was little plot or character development. The dialogue was buggy. The animations don’t match with what you’re doing. And this was a short 75-minute episode compared to the 90 minutes or longer that Telltale usually gives us. It certainly wasn’t Telltale putting their best foot forward.

The Walking Dead: Michonne – Episode One: In Too Deep was played on Windows PC but is also available for OS X, PlayStation 4, Xbox One, PlayStation 3, Xbox 360, iOS and Android. The review code for this game was provided by Telltale Games. Your impressions of the game may change depending on platform played on, PC specs and if you have read The Walking Dead comics.