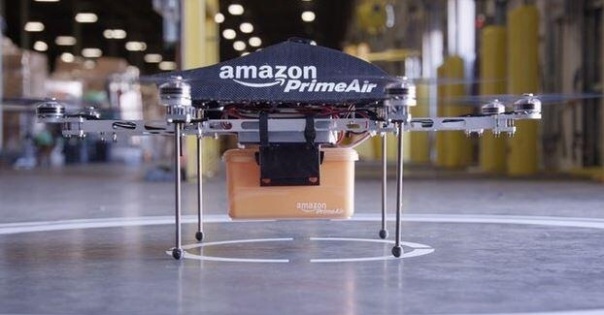 When you think of America and drones, you tend to think of the ones that the American military uses to drop bombs on unsuspecting targets. However, Amazon wants to change your perception of unmanned flying drones by using them to deliver packages to Amazon Prime customers.

In an interview on CBS’ 60 Minutes, Amazon CEO Jeff Bezos unveiled the company’s new drone project. Drone delivery is currently in the testing phase and is expected to be rolled out within the next five years. Currently, the Federal Aviation Administration (FAA) don’t have any rules in place allowing for the flight of unmanned drones for commercial purposes but have until 2015 to set those rules.

Bezos says that the drones will be able to carry up to 5 pounds (2.3 kilograms) up to 10 miles (16 kilometres) from a distribution centre. The target is delivery occurring within 30 minutes of an order being placed.

Amazon isn’t the first company to express interest in or use drones for parcel delivery. This summer, Domino’s UK tested a drone pizza delivery service that was written off as a PR stunt. In China, drone delivery is legal and is already being used by parcel service SF Express. Those drones can fly to a maximum of 100 feet and have an estimated carrying capacity of 3 kilos (6.6 pounds).

As much as I want to say that this is a neat idea, I see it as a bit needless. I think Amazon’s standard Super Saver Shipping is plenty good for me even if it takes up to a week for some goods to be shipped to me. Even if I was within 10 miles of an Amazon distribution centre, I somehow doubt that I would need something shipped to me in 30 minutes. And that doesn’t even start to get into the issues with just dropping a package in someone’s front lawn, what it would do about apartment buildings and how drones would handle Canadian winter.

Posted on December 3, 2013, in Tech and tagged Amazon, Drones. Bookmark the permalink. 1 Comment.